Member of the Five Dastardly Bombers

Magnet Bomber is a villain from the Bomberman series. He is a member of the Five Dastardly Bombers, and serves Buggler.

In Super Bomberman R, he was voiced by Tetsuya Yanangihara in the Japanese version, and by Jack Merluzzi in the English dubbed version.

Magnet Bomber acts as the boss of World 1-7.

After his defeat in World 1-7, Magnet Bomber hops into a giant robot and acts as the boss of World 1-8.

Magnet Bomber's giant robot has extendable arms with boxing gloves and attacks via trying to punch out Bombermanm however despite its size the machine is not very difficult to defeat.

After being defeated a second-time, Magnet Bomber is seemingly destroyed for good as Bomberman blows up his area and moves on to deal with the other villains of the story.

Magnet Bomber returns in Bomberman Tournament, fighting against White in the Magnet Base. This game has him fuse with the Karabon, Pommy Fangs to turn into his draconic form, MagnetDragon.

Magnet Bomber is fought on World 1: Planet Technopolis. First making a grand speech about his own stages, he is interrupted by Red. After being enraged by comments about his height, he begins a battle on foot. He switches to using the Iron Gauss when defeated at first. After the fight, he then punched into the sky after refusing to quit fighting despite Aqua's requests.

After Buggler makes his black hole, he is fused along with his teammates into the Great Gattaida. After this fails, he then joins forces with Bomberman to defeat him.

Magnet Bomber has a turquoise blue body with yellow eyes and has a magnet symbol on his head. He wears a white scarf with red and blue on the tips at the end and wears a red glove is his right with an 'N' on it while his blue glove is his left has an 'S' on it which shows the polarity colors of positive and negative on magnets.

Magnet Bomber is portrayed as arrogant, but quick to anger and sensitive about his size. 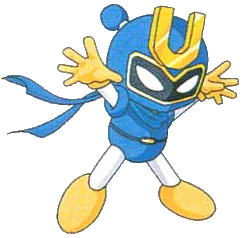