Competing for his father's approval.

To earn the right to wield Mjölnir (partially succeeded).

To kill or capture Kratos and Atreus (failed).

Magni is a major antagonist in 2018's God of War. He was an Æsir god and the eldest son of Thor. He and his younger half-brother Modi both follow their uncle Baldur in the quest to find and kill Kratos and Atreus.

He is voiced by Troy Baker, who also voiced Joel Miller in The Last of Us, Pagan Min in Far Cry 4, Delsin Rowe in Infamous: Second Son, Simon Krieger in Marvel's Spider-Man: Miles Morales, Two-Face in the Batman: Arkham series, and The Joker in Batman: Arkham Origins.

When they were children, Magni and Modi rescued their father after Hrungnir had fallen onto him after their father had killed the Giant. When everyone (with the exception of the God, Mimir) was too busy laughing, the two effortlessly lifted the corpse off of Thor. Due to being the strongest and more charismatic, Magni was given all the praise for the effort, leaving his brother Modi incredibly jealous, fueling the rivalry between them. During the Aesir-Vanir War, Magni, with the help of his brother Modi killed the Vanir Goddess Nerthus.

Sometime after their uncle failed the first time, Magni and Modi were summoned by their grandfather Odin and ordered to aid Baldur in his hunt to capture Kratos, after the former's failed first encounter with the legendary Greek god. They first visited imprisoned ambassador of the Norse gods, Mimir, seeking to know Kratos's location and how to deal with him.

Unfortunately for them, Mimir doesn't know Kratos's location, and refuses to help them any further, even after Baldur promises to put a good word for him when returning to Odin. Before leaving, while Modi threatens to gouge out his other eye while no one was looking, Magni warns Mimir that they would know if he double-crossed them.

Magni and Modi separate from their uncle and continue their search for Kratos and track him down to Thamur's corpse, a Frost Giant killed by Thor. They discovered the corpse when Kratos and his son Atreus used the Giant's hammer to break through the ice to get his chisel. Unlike Modi, Magni realizes the hammer wouldn't have fallen after centuries without interference, and orders his younger brother to find the pair. Magni eventually finds Kratos and Atreus when he drops to the ground from above while killing an Ogre.

Tossing the beast's corpse aside, he orders the pair to surrender under Odin's orders, and when Kratos promptly refuses, Magni eagerly draws his sword for a fight, where Modi joins him. Following a vicious battle between Magni, Modi and Kratos and Atreus, Kratos is able to overpower Magni and split his head open with the Leviathan Axe, killing him, horrifying Modi who promptly flees.

Magni's death invoked severe consequences to both his brother and his killers. Driven by grief, his father Thor severely beat Modi for failing to both assist and then avenge his brother. This led to Modi seeking out Kratos and Atreus one last time before being killed himself by the latter.

Magni's, along with his brother and uncle's deaths, was one of the reasons why his father Thor sought out Kratos and Atreus, to avenge them.

Magni, like most of the Æsir, was a cruel and sadistic individual, taking pleasure in the suffering of those who stood in his way.

However, unlike his brother, who was a coward that enjoyed beating those weaker than himself. Magni had no problem fighting those who were as, or stronger than himself, merely eager for challenges as he viewed Kratos and Atreus as equals. This is shown when he expressed relief when Kratos chose to fight rather than surrender. Magni's lust for battle went to the point that he didn't care why his grandfather, Odin, wanted the spartan and his son, only that he was supposed to either bring them back or kill them.

Magni was loyal to his family, including his grandfather Odin, his father Thor and his uncle Baldur. Unlike Modi, who was reluctant to work with Baldur due to his insanity, and Baldur's own insults towards them, Magni had no issues taking orders from their uncle as since their father had trusted him, Magni believed they should

Just like his brother, Magni was constantly trying to please his father, the mighty Thor, but thanks to his strength, loyalty and lack of cowardliness compared to Modi, Magni was the favoured son so his desire to please Thor was nowhere near as obsessive as Modi's.

Magni and his brother, Modi had a reputation as idiots/fools due to their low-intelligence. Many characters called them by many insults. Baldur called his own nephews idiots. Kratos called them fools. Mimir called them "bigger twits" and "worthless wankers". Sindri called them "Thor's idiot sons" and Brok called Magni a loudmouth. Despite the insults to his intelligence, Magni was shown to be smarter than his brother, as unlike Modi, Magni recognised that after centuries of being frozen, Thamur's hammer wouldn't fall without outside interference. Likewise, he was able to recognize a Dwarf (Sindri) was nearby.

Magni was shown to look down on his brother, both for his cowardliness and (supposed) paedophilia, which repulsed him. Magni was often shown to give him orders and threatened Modi when the latter kept questioning their uncle's sanity. Despite how often he would smack Modi for his stupidity and cowardice, he and his brother kept their rivalry out of their tasks as they didn't want to disappoint Thor. 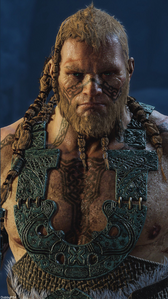 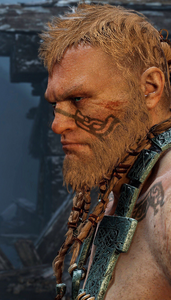 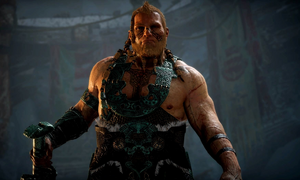 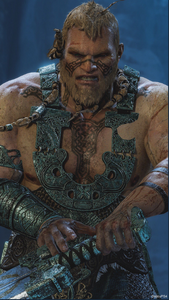 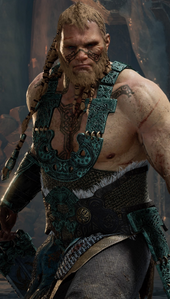 Magni pins down Kratos during the fight. 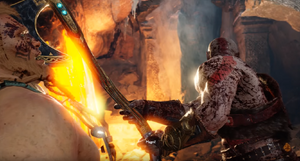