Unc (Both by Axel Finke)

Prove he is better than the Rescue Riders.

A group of two humans and four dragons arrive at Huttsgalor at the invitation of Chief Duggard Magnus is horrified at the thought of dangerous wild animals in his village and makes his case to the people. When the town sheep, Haggis, cozies up to one of the dragons, he is dismissed. Later, he showcases his Auto Lumberjack Machine in order to make a profit, but is outdone by another dragon. Fed up, Magnus then devises a plan to get rid of the dragons by hiding Haggis and accusing the dragons of eating them. Unable to prove their innocence, the group leaves. Magnus continues on using his machine, but it becomes out of control and threatens the village. Magnus creeps away when he finds he can't stop his machine. The dragon group returns just in time to save the village. The people are split on whether the group should stay or go. Magnus advocates for leaving, but Hannahr discovers the hidden Haggis. Caught in his lie, Magnus flees the town center. The dragon group stays and is dubbed the "Rescue Riders".

Magnus Finke also made a mechanical dragon. His nephew is the one who will drive it and prove that it is better than the Rescue Riders by doing tasks in Huttsgalor. Later, that machine turned out to be unstable and it got broken. He often make new and improved ones, but they always fail.

When there is a competition, Game of Horns, Magnus, Chief Duggard and Elbone participated. Magnus used his Mechano Dragon to do the tasks for him. The Rescue Riders helped Chief Duggard to win and they won. 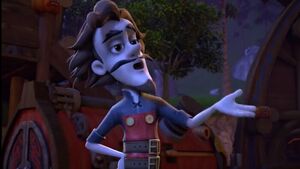 Retrieved from "https://villains.fandom.com/wiki/Magnus_Finke?oldid=4346093"
Community content is available under CC-BY-SA unless otherwise noted.