Villains Wiki
Register
Don't have an account?
Sign In
Advertisement
in: Article stubs, Doctor Who Villains, Male,
and 20 more

Magnus Greel, also known as Weng Chiang is the main antagonist of the Doctor Who story The Talons of Weng Chiang. A notorious dictator from the 51st century, Greel used experimental time travel to escape to the 19th century. There, he posed as the Chinese God Weng Chiang, and used the Tong of the Black Scorpion to seach for his time cabinet.

His brutality was infamous, leading him to be nicknamed "The Butcher of Brisbane". Greel personally experimented with the catalytic extraction chamber, in an attempt to cannibalise life energies. He was responsible for the deaths of 100,000 prisoners of war, who he considered "enemies of the state", by using them as fodder for his experiments. After the defeat of the Supreme Alliance in the Battle of Reykjavik, Greel utilised a time cabinet to travel with one Peking Homunculus back in time to 19th century China.

The Butcher of Brisbane

The Fifth Doctor, having already encountered Greel in his past, would discover the exact events that led him to escape his own time and place.

Magnus Greel arrived in China in 1872, but the journey, using unstable Zygma Beams caused great damage to Greel's DNA, disrupting his metabolism and causing his cells to decay, leading him to be hideously disfigured. The peasant Li S'en Chang, who believed Greel to be the God Weng-Chiang, due to the nature of his arrival, would join his service, protecting the weakened Greel from the soldiers of the Tung Chui, the Time Cabinet was taken by members of the Chinese Imperial Court while he was hidden, leaving Greel trapped in this time.

The Talents of Greel

The Talons of Weng-Chiang 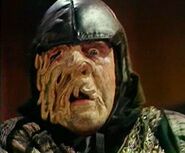 The young Magnus Greel, as portrayed by Angus Wright.