Skilled usage of his baseball bat

Kill humans and suck out their blood (failed).

Magori is one of the Killer Klowns and a minor antagonist from the 1988 sci-fi-horror-comedy film Killer Klowns from Outer Space. He has red hair and colossal blue flat eyebrows that look painted.

Magori was seen trying to whack down Mike, Debbie and Hansen until the Terenzi Brothers drove in using their "Great and Powerful Jojo" fake head on top of their ice cream van to command the Klowns to stop. Magori is only seen for a few seconds, but his face is on one of the film's posters and he is the most visible in the marketed picture depicting Magori in the middle with Spike, Jumbo, Fatso and a Slim look-alike towering over the policeman who was killed with acid pies. He somewhat resembles Rudy. Klownzilla exploded causing the ship to explode, possibly killing all of the clowns. 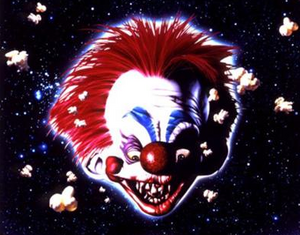 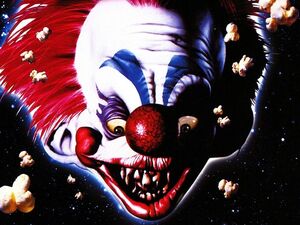 Retrieved from "https://villains.fandom.com/wiki/Magori?oldid=4091166"
Community content is available under CC-BY-SA unless otherwise noted.