Magpie is a minor antagonist in the TV show Gotham. She was a jewel thief who was later murdered by Oswald Cobblepot and Selina Kyle after she stole from the former.

She was portrayed by Sarah Schenkkan.

Although the exact point when is unknown, Magpie became a known jewel thief in Gotham City.

When Magpie was out on a mission, she noticed that someone had beat her to where she was going and followed back to their base, said base belonging to the Penguin. Seeing Penguin shoot his thief dead, she followed down to his hidden horde of treasure. After this, she stole the Russifer Diamond, from his clutches (lovingly naming it "Charlotte"), until she was discovered by Mr.Cobblepot in the flesh. Her eye catching his firearm, she described how she followed him and revealing there being two diamonds. However, one was secretly a explosive in disguise, using it's blast to flee.

Later, Penguin later managed to, with the help of Selina Kyle, discovered her workshop, where she made her faux gems. Noticing the two, the shocked thief tried to flee after making Mr. Cobblepot fall, but was stopped by Selina. Noticing one of the attackers to be the murderer of Jeremiah Valeska, she managed to escape again, this time by holding a watch and explaining how anything in her office can blow up anytime, buying her enough time to run away.

After this, the naturally greedy thief returned to try to swipe more of Penguin's goodies before she grabbed a trap and was shot. Lying there until her former attackers returned, she asked if the two would let her free.... only to be met with Penguin's cold laughter and fatal gunshots.

A deranged thief, Magpie constantly has a playful attitude, even in her last moments alive.

Magpie is skilled in several areas. Being needed for a stealthy thief, she is very agile and acrobatic, able to flip over Penguin in a single bound. She is also skilled in making bombs and disguises for them, which comes handy when making her faux jewels. 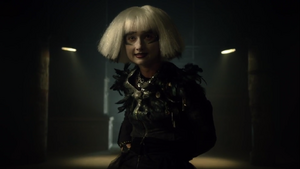 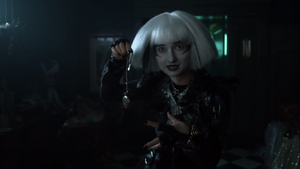