To make a new blanket out of one of the Cubs (failed).

Mahra is the mother of Ned, Jed and Fred and a recurring antagonist in the 1996-1998 series Jungle Cubs (a prequel to the 1967 film The Jungle Book).

She is an elderly baboon who along with her sons, lives in a wasteland outside the Indian jungle and is an enemy of the Jungle Cubs.

"A Night in the Wasteland"

Mahra is seen returning to her home of Pinnacle Rock in the Wasteland after being away in the south, where her sons unintentionally destroy her fur blanket. Angered, Mahra orders her sons to get her a new blanket or don't come back.

Later, Mahra comes across her sons facing against Baloo, Louie,Bagheera,Hati and Kaa, where she tells the Cubs to go, except Baloo, whom she wanted to make into a blanket. However before she can harm Baloo, Mahra and her sons flee after seeing Shere Khan roaring on top of Pinnacle Rock, which he said he would do in order to prove to the other Cubs that he was brave.

"Who Wants To Be A Baboon?"

After being a victim of too many jokes, Louie leaves his friends and goes to the Wasteland where Ned, Jed and Fred take him to Mahra, who makes Louie her assistant. 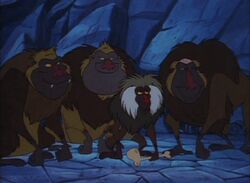 Mahra with her sons Ned, Jed and Fred.
Add a photo to this gallery

Retrieved from "https://villains.fandom.com/wiki/Mahra?oldid=3985193"
Community content is available under CC-BY-SA unless otherwise noted.