Maintain her relationship with Zuko (suceeded).

Hunt down the Avatar (formerly)

Mai is a major antagonist-turned-supporting protagonist of Avatar: The Last Airbender, She is a skilled warrior in the service of the Fire Nation, one of Azula's two main allies (alongside Ty Lee) until the events of Book 3: Fire. She is also Zuko's girlfriend and the daughter of Ukano.

She was voiced by Cricket Leigh.

Mai is a friend to Princess Azula and Ty Lee, making her an enemy of Team Avatar. While not a firebender, She belonged to a wealthy Fire Nation family. She is a 15-year-old girl who falls in love with Prince Zuko since a few incidents from their youth that resulted in admiration for one another. She's the daughter of one of the Fire Nation's former Governors, older sister of two-year-old baby Tom-Tom, and niece of the Boiling Rock's warden. She was one of Azula's best friends, but Azula tried to use fear to control Mai rather than just trust she'd always have her back. In the middle of season three, she betrayed Azula to prevent Zuko from falling into boiling hot water in a crater while telling her that her love for Zuko is much more than her fear. After doing so, an infuriated Azula was prepared to execute Mai, when Ty Lee rescued her by hitting pressure points that temporarily paralyzing Azula. Azula ordered that they be sent to prison and "left to rot". Mai and Ty Lee remained imprisoned with the Kyoshi Warriors until the Avatar Aang defeated Fire Lord Ozai and Zuko defeated Azula and became the new Fire Lord, upon which they were released.

After her release from prison, she resumed her relationship with Zuko, although the graphic novels reveal that they break up a year later. No mention is made of her in The Legend of Korra so it's unknown if she is still alive, since The Legend of Korra takes place 70 years later. It is known that Zuko had a child but all family trees leave the mother empty in this regard.

Her weapons are stilettos, small knives hidden in her sleeves. She was once seen with a larger dagger, though. She developed the skill out of boredom while in the Fire Nation. Due to the show, her daggers never actually hit any fellow characters, save one instance where they came close to Katara in battle, but simply hit wooden blocks flung towards her. 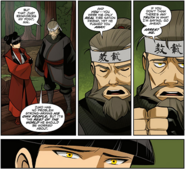 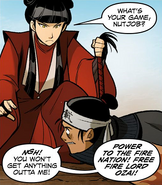 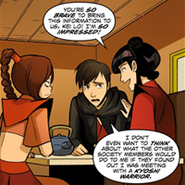 Retrieved from "https://villains.fandom.com/wiki/Mai_(Avatar)?oldid=4235095"
Community content is available under CC-BY-SA unless otherwise noted.