Mai Lee East is a supporting antagonist of the 1999 film Wild Wild West. She is one of the four mistresses (the others are Munitia, Amazonia and Miss Lippenrieder) of Arliss Loveless involved in the Loveless Alliance's plot to overthrow the United States government and divide the nation amongst themselves.

She was portrayed by Bai Ling, who also played Myca in The Crow.

Miss East first appeared along with Loveless and the other mistresses as they arrive to a saloon, where they are awaiting Mr. Hudson and Bloodbath McGrath, with the latter having his soldiers deliver cases of nitroglycerin and a kidnapped scientist named Professor Escobar. However, two officers named Artemus Gordon and James West intervene while attempting to detain McGrath (to no avail), forcing Loveless and his men to ditch the scene, but not before they destroy the nitroglycerin supply to cover their escape.

Assigned by President Grant to work together, Gordon and West track down McGrath's current location in New Orleans, where Loveless is hosting up a costume party for the elite of Southern society. However, awaiting West's arrival, Miss East introduces herself to West before introducing the latter to Loveless himself. Under Loveless' orders, Miss East directs West to a secret parlor inside the mansion where she tries to seduce him, as she has formulated a plan to take him down by having several assassins posing as paintings around the room.

However, West takes notice of Miss East looking at the assassin standing behind him and escapes the bullet, resulting Miss East to be killed by accident. West then takes the opportunity to kill the assassins down with his own gun before escaping with Gordon and Professor Escobar's wife Rita. 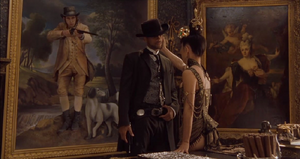 Miss East trying to seduce West in an attempt to have him killed. 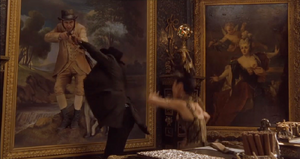 Miss East taking the bullet by accident after West spots one of the assassins. 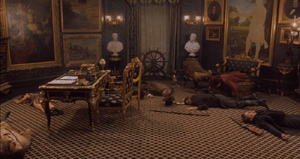 Miss East and the assassins succumbing to their deaths by the bullets.
Add a photo to this gallery

Retrieved from "https://villains.fandom.com/wiki/Mai_Lee_East?oldid=3890626"
Community content is available under CC-BY-SA unless otherwise noted.