Private in the British Army (formerly)

Was presumably skilled in the Military field
After Infection:
The powers of a typical Infected
Appeared to be slightly smarter than an average Infected

Trying to escape his chains.

Break out of his chains and get vengeance on the men who put him there (succeded).

Mailer is one of the Infected and an antagonist in 28 Days Later. He is one of Henry West's men and was Infected in the middle of the Outbreak.

He is played by Marvin Campbell.

Mailer was among the many soldiers led by Major Henry West sent to the Forty-Second Blockade put up to defend the city of Manchester from The Infected when the Rage Virus broke out in Great Britain. But the Infected eventually overran the barricade, killing or infecting all the soldiers except Mailer and nine others. Mailer and the other soldiers abandoned their post at the blockade and fled to the Worsley House in the woods where they fended off attacks from Infected with military traps and firepower.

On day 23 of the outbreak, Major Henry West promised his soldiers that any female survivors they rescued would be forced into sexual slavery to rebuild and repopulate the destroyed United Kingdom. On day 29 of the Outbreak, Mailer was Infected. Luckily, before he could kill or infect any of his fellow soldiers, Corporal Mitchell managed to knock him unconscious. And he was later chained up in the backyard of the Worsley House. Mailer probably disagreed with West about rebuilding by rape, and thus West had no worries about chaining him up outside and essentially letting him starve to death. Mailer was given food each day but, to the soldiers' surprise, he ignored it. This proved the Infected didn't eat. He was also constantly drooling blood. His capture was useful to the men, it gave them a chance to study the Infected, and, in West's words, "tell them how long it takes for the Infected to starve to death."

Mailer first appears when Major Henry West introduces him to Jim. Mailer tries to trick Jim by entrancing him, but tries to attack him. West tells Jim that Mailer is "futureless" and leaves with Jim. Later that night, after West's rape plan is exposed, and Jim is unsuccessfully executed, and he escapes West and Davis, Jim shoots the chains binding Mailer to the yard with Davis' rifle (who he had murdered earlier). Mailer stares at Jim (possibly as some form of gratitude) and shrieks in anger towards the Worsley House. Jones is unnerved by Mailer's screams; but Mitchell disregards the noises as thunder and lightning. Hannah (still under the effect of the sleeping pills) begins making prophetic claims about Davis and Henry (who went searching for Jim at the blockade)'s deaths and that Jones, Mitchell, and Clifton were next. Clifton is then ambushed through the window by Mailer. He vomits 2 mouthfuls of blood onto Clifton's bare face, infecting him. After the others flee the room, Clifton emerges from the floor as an Infected. He then aids Mailer in his rampage through the Worsley House. Mailer chases Major West into the house's cellar; and Mitchell sends Bedford to kill him. As Mailer searches for the cowering Jones (who was hiding in a cupboard), Bedford appears and arrogantly begins to taunt Mailer before shooting him. This proved to be a fatal mistake, as Clifton ambushes Bedford from the right. He and Mailer then proceed to drag the flailing, defenseless Bedford onto the table and snap his neck and maul him to death (while Major West hides and cries in horror). He later appears after Jim murders Jones trying to escape the Worsley House. Clifton and Mailer pursue Jim, but give up after he hides in a switching wall. Mailer and Clifton next appear after Jim discovers the cowering Bell hiding in the house's nursery after running out of ammunition. As Jim escapes the room, the two Infected soldiers break into the nursery and maul the defenseless private to death. The Infected Clifton disappears further into the house. Buying Jim time to escape the room while they were distracted with Bell. Mailer appears one final time after West shoots Jim for killing his "boys". He peruses Frank's taxi as Hannah drives off; seemingly abandoning Selena and the dying Jim. But she stops abruptly. As Mailer breaks through the back window and drags West into the house. There, he proceeds to viciously beat and maul West to death. Finally achieving his long-awaited for revenge against West and his men. He then shrieks in anger (while his murder of West bought the Manchester Three time to escape the Worsley House). Mailer's true fate afterwards is unknown. But he dies along with the other Infected; presumably of starvation. 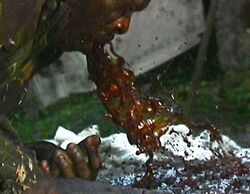 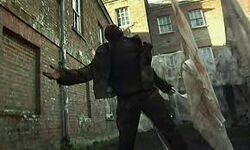 Mailer outside the window

The aftermath of Mailer's rampage

Mailer killing Henry West
Add a photo to this gallery
Retrieved from "https://villains.fandom.com/wiki/Mailer?oldid=3703858"
Community content is available under CC-BY-SA unless otherwise noted.