Maimu Okurahama is the minor antagonist in the 2013 in the anime series, Kill la Kill. She was the president of the Folk Dance club.

She was voiced by Erina Hasumi in the Japanese version, and by Kira Buckland in the English dubbed version.

Maimu is a high school president who has a short brown hair and brown eyes. Despite being a Club President, she wears the Two-Star Goku Uniform with the white shirt with a blue neckerchief, a blue school uniform skirt, a white pair of socks and light brown shoes.

In episode 7, Maimu and their club doing the challenged, when she fighting with Ryūko Matoi to using her dance club, after Maimu defeated by Ryūko Matoi.

She appearance debut on episode 22 during being extracted by the COVERS. 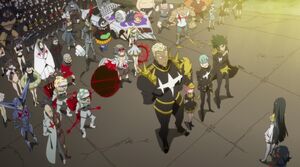 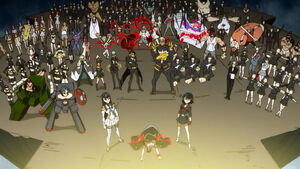 Maimu seen with the rest of the students.