Destroy the Justirisers
Destroy Earth and Riser
Become ruler of the Universe
Conquer the entire universe.

Majin Daruga is the main antagonist of Genseishin Justiriser. He is the leader of the Hades Army, the leader of the Daruga Imperial Army and the older brother of Kaiser Hades. As well Majin Daruga is the ultimate antagonist of Genseishin Justiriser. Later on in the series, he steals Jinno's Riser Power, transforming him into Dark Demon Kurogane.

Daruga received his younger brother's powers after his death, and sent Commander Adorocs to Earth to prepare it for his arrival.

After the Commander's continuous failures to defeat the Justirisers, Daruga forced him to fight them himself, a battle which his minion did not walk away from.

Upon his arrival to Earth, Daruga gave a speech to his followers from atop his hover platform, before attacking the Justirisers with assistance from his Rejander, Drake. During the fight, Daruga was able to steal Demon Knight's Riser Power, allowing him to transform into Dark Demon Kurogane.

After Drake's death, Kurogane deployed his army of Bugarlo Mecha to Earth to battle the Justirisers. When the Justirisers defeated the mecha with their Genseishin, Kurogane attempted to blow up the Earth with his battleship Diglos' Gigatron Cannon, but this was foiled when Shouta seemingly sacrificed himself to blow it up.

Kurogane survived and confronted Mio, Reika and the two remaining Justirisers. Kurogane declared he would build a new empire before attacking them. The two Risers attempted to defeat him but to no avail. However, Shouta suddenly showed up, having been saved by Jinno. Shouta transformed into Riser Glen and joined his comrades in battling Kurogane. The three attempted to combine their powers to fire a beam to defeat Kurogane, but the space tyrant teleported out of the way at the last moment. Kurogane then transformed into a giant space beast and went on a rampage throughout the city. He was stopped when the Justirisers summoned a giant Shirogane and funneled their powers through it to destroy Kurogane. 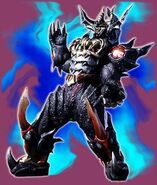 Final Form
Add a photo to this gallery 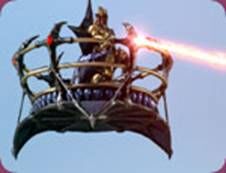 Daruga on his floating platform. 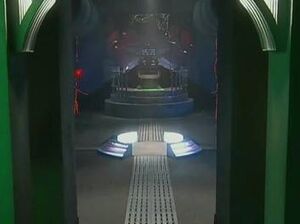 Daruga in his throne room 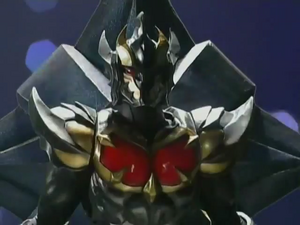 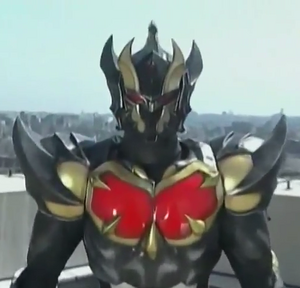 Retrieved from "https://villains.fandom.com/wiki/Majin_Daruga?oldid=3540997"
Community content is available under CC-BY-SA unless otherwise noted.