Summoning a shower of arrowheads

Majiramon is an Exalted Beast Digimon whose name is derived from the mythological Anila. It is the "Dragon" Deva, and serves the Sovereign Azulongmon. As a follower of Azulongmon, it is extremely calculating and hates to even lift a finger if it won't benefit itself. However, if it releazes that something will benefit itself, it will want to poke its head in no matter what the thing is. It has a habit of putting a price on everything, and expressing various matters by their cost in money. During battle, it shoots through the opponent with the "Treasure Arrow", which are the hairs of its tail and whiskers transformed.

He was voiced by Kojima Kazunari and late Bob Papenbrook in the English version for Digimon Tamers and Katsuhisa Hōki for Digimon Ghost Game.

An Ultimate Digimon with a form resembling that of a dragon, he is a member of the Digimon Devas. A subordinate of the Four Holy Beasts member Azulongmon, this calculating and manipulative member will become reluctant to move even a finger when called on. However, he will poke his head into other people's business no matter what, provided he is able to get something out of it in return. He also has a habit of bargaining everything at a price, and various matters are expressed by the quantitative amount of money. He is able to transform the hairs that make up his tail, beard and hair into "Bao Shǐ" arrows when combating, stabbing the opponent with them. (one of these arrows costs about 5,000 Yuan, if anyone is interested). His special attack is "Vedaka", which calls down a whirlpool of light from the sky before disappearing into the center and firing down 108 shining arrows, wiping out a large amount of enemies in a single moment. The destructive charge of this attack is about 540,000 Yuan.

Makuramon used Majiramon to fly up to where Calumon's cage was stuck, but it was empty, so they went looking for it. They encountered the Tamers and engaged in battle. Majiramon easily defeated Leomon, Gargomon, and Growlmon but was defeated when Ryo used the Goliath card to make Cyberdramon bigger. Once they were the same size, Cyberdramon proceeded to manhandle Majiramon and killed the unlucky dragon by crushing his skull (in the original Japanese, there is an audible "crunch" when this happens). 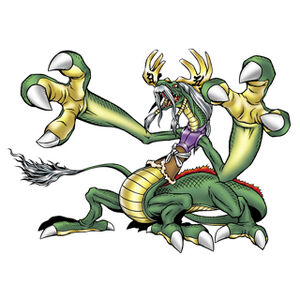 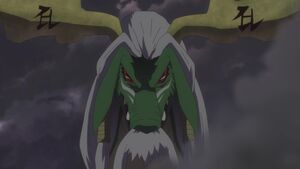