Going along with Mayor Kobayashi (both falsely).
Killing dogs.

Major-Domo is one of two main antagonists of Wes Anderson's 2018 stop-motion film Isle of Dogs. He is the manipulative right hand servant to Mayor Kobayashi and wants to exterminate dogs even more than he does.

He was voiced by Akira Takayama.

Through most of the film, Major-Domo takes second importance to Mayor Kobayashi, with Major-Domo only appearing alongside his boss. He was driven to villainy as Watanabe finally develops a successful serum and shows the results to Kobayashi, who dismisses the results and refuses to lift the dog ban, as the professor objects to this, only to be put under house arrest and killed by a piece of poisoned sushi by orders of Major-Domo himself. His role in the film becomes more villainous in its climax, where while Kobayashi has a change of heart, Major-Domo becomes enraged, yelling at Kobayashi for breaking his campaign promise, and tries to kill Kobayashi with a robotic dog and initiate the extermination of the dog race himself.

Mayor Kobayashi failed to stop Major-Domo as he successfully presses the button, now completely uncaring that it would also result in the countless deaths of the Megasaki citizens who are now in the way. However, this would prove to be Major-Domo's ultimate downfall, as by the time the signal reaches the extermination electronics (via the signal demultiplexer), they are hacked, (the poison backfires and is unleashed on the captors, the robotic dogs return to normal, and the drones start going haywire) which in turn causes the latter to malfunction and fail, as Major-Domo watches in shock and disbelief, meaning that his extermination goal has failed.

This was thanks to an activist friend of Tracy Walker (who was in the process of being sent back to Cincinnati, Ohio), thus allowing the dogs to escape Trash Island. As a result of his failure to exterminate the dog race, Major-Domo has been put under arrest by Megasaki police and sent to prison for his crimes along with Kobayashi's propagandists and co-conspirators, meaning that he won't be allowed into society until he is sent to death row during his prison duration, while Atari becomes the new mayor of Megasaki due to a legal statute in Kobayashi's stead, and has all dogs reintegrated into society and cured of the dog flu at the end of the film.

According to the new mayor Atari who decreed the dogs' reintegration into society (which is also broadcast), Major-Domo and Kobayashi's propagandists and co-conspirators is paying fines of no less ¥250,000 (which is approximately $2,500 USD), doing under thirty days of community service, while Major-Domo is sentenced to be possibly executed (by hanging) under Megasaki's new laws for forcing an attempted extermination of the dog race (which is a crime categorized under murder, besides "abusing, beating, or yelling at any dog").

Major-Domo is a cruel, horrible man. While this is not readily apparent, he has been manipulating Kobayashi and has actively engaged in much of the conspiracies going on throughout the movie. He has a heart of stone incapable of redemption, is completely uncaring and is willing to seriously harm anyone who gets in his way to achieve his extermination goal (which already failed thanks to the extermination electronics getting sabotaged and hacked by Tracy's activist group), shown when he started a fight with Kobayashi over the button that would have exterminated the dog race.

His vile appearance could be considered a hint to his true nature: a vile, pale looking thing, hardly resembling a human in everything but basic shape. His head is long and rectangular, his lips are chipped and black, his teeth are crooked and yellowed, and his skin is that of a ghostly pure white. This is of a major contrast to the Mayor, who has a completely normal appearance. 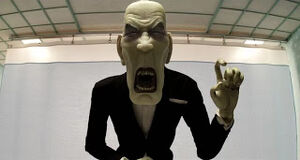 Domo setting up the red button.

Major-Domo shocked to see Kobayashi redeem himself and call off the extermination of the dogs.

Major-Domo furious at Kobayashi for not following through his plan. 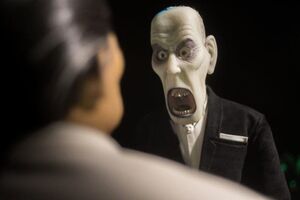 Major-Domo in his villainous breakdown from the other side, showing his extremely enraged emotion.

Major-Domo and Kobayashi fighting over the extermination button. 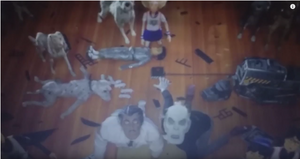 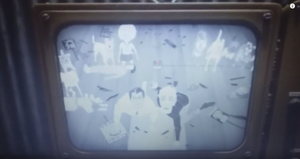 ...only to realize that the extermination has failed.