Use his powers however he pleases

Major Force is a product of the same U.S. Federal project which created Captain Atom during the Vietnam War. The government, in a project headed by Wade Eiling and the scientist Megala, was experimenting with the effects of atomic energy on an alien metal they had taken from a crashed spaceship to determine its full protective abilities; such as protecting a human being from a nuclear blast. After the disappearance of Nathaniel Adam and the perceived failure of the Captain Atom Project, the government restarted the project with a new subject, Clifford Zmeck and increased the amount of metal used (Captain Atom #36 (Dec. 89). While in the USAF, Zmeck had been jailed in a high security prison for rape and sentenced to life in prison. He was offered a pardon in exchange for participation in the high-risk governmental experiment.

The results were the same as with the Captain Atom Project and Zmeck disappeared into the Quantum Field, emerging one year after the return of Nathaniel Adam. This time, the government was ready and implanted microexplosives under the metal while it was still malleable, in order to control Zmeck in case he went rogue. During one mission, government operators seeking to control him using implanted gas pellets accidentally activated one such explosive, amputating one of his hands. Introduced as an ally, then successor to Captain Atom, Force's brutality betrayed his government-concocted role of superhero and brought him in frequent conflict with Atom. Major Force is now arguably Captain Atom's arch-enemy. Eventually, he became a hired gun for General Wade Eiling's purposes.

In Green Lantern vol. 3, #54 (August 1994), Major Force killed Alexandra "Alex" DeWitt, girlfriend of the Green Lantern Kyle Rayner, and stuffed her remains in a refrigerator so that Kyle could find her. Rayner tortured Major Force after their fight, but was stopped by forces of LAPD's Special Crimes Unit. Alex's demise inspired writer Gail Simone to create the website Women in Refrigerators, which in turn coined the term of the same name.

In Guy Gardner: Warrior #43 (June, 1996), Force killed Arisia, a former Green Lantern and dear friend of Guy Gardner. Force was apparently confronted in Kyoto, Japan. Guy Gardner seemingly kills him in revenge. In reality, Force is made of energy and not matter. He cannot die and has effectively gained immortality.

In Superman/Batman #3 and #4 (December 2003 and January 2004), Force is part of a Government Task Force led by Captain Atom, in addition to Green Lantern John Stewart, Power Girl of the JSA, Starfire of the Teen Titans, Japanese superhero Katana and retired superhero Black Lightning. He is saddled with Captain Atom by President Lex Luthor in order to bring in Superman when a Kryptonite asteroid was headed for Earth. Superman and Batman escape them in Washington but met up with them again in Tokyo. Power Girl and Katana reveal they are double agents working with Superman and Batman the whole time. When Captain Atom and his squad pursue them to Japan, Power Girl strikes at the Major. When he returns fire, Katana chops his hands off, releasing the atomic energy he harbored. Batman convinces Captain Atom to absorb the energy leaking from Force, which threatened to decimate the city. Captain Atom absorbed all the energy and disappeared, moving several years into the future in a quantum leap.

As indicated in Superman/Batman #25, a copy of Major Force's mind, his thoughts, his anger, gets mixed in with the essence of the new Kryptonite Man.

In an issue of Guy Gardner, Major Force seemingly slays Guy's mother in the same manner as Kyle's beloved girlfriend. After some confusion, it is learned Force had killed a neighbor who had been house-sitting. In Green Lantern vol. 3, #180 (October, 2004), Force apparently decapitates Maura Rayner, mother of Kyle Rayner, and stuffed her severed head in an oven. He later said it was just a mannequin. Kyle snaps, decapitated Force (whose head was still talking), sealed it in a bubble of Green Lantern energy and sent it into outer space (Kyle later finds out his mother is alive and well).

Major Force reappeared in the new Battle for Blüdhaven book, a title set a year after the events of Infinite Crisis, as the field leader of project S.H.A.D.E. In issue #5, he rips the right arm off a government hero named Major Victory, and beats him with it (Major Victory reappears in issue #7). He also picked a fight with Hal Jordan, as Force vowed to kill any Green Lantern on sight after his last encounter with Kyle Rayner. Jordan personally wants to put an end to Force's murderous rampage, as he's enraged by the knowledge of Alexandra DeWitt and Arisia's murders, and even sent Force to a hard-light constructed refrigerator in a similar fashion as Force done to DeWitt during the battle.

However, Captain Atom was revived by the Atomic Knights in issue #6 (as Monarch), and Force's rampage was quickly brought to an end when Atom drains him of his energy, leaving nothing but a husk. Force's corpse was last seen falling into the chaos left by Atom's energy expenditure.

His image appears in the series Ion as a representation of Kyle Rayner's fear.

Major Force's body is seen being kept in a secured crypt beneath Justice League of America's Hall of Justice in Washington, DC during Blackest Night #1.

Oddly, Major Force is subsequently seen alive and well in a band of villains including Eclipso and Dr. Polaris and many others during Justice Society of America #29. He is also seen in the pages of Action Comics #882, as part of the government project 7734, attempting to capture the rogue Captain Atom, who had since returned to his former identity.

Major Force is coated with the same Dilustel alien alloy that covers Captain Atom. As a result, he also can access the Quantum Field and use its energies for a variety of powers. However, his abilities stemmed from a different spectrum of field granting him different powers from Atom, aside from the superhuman strength and durability. This was theorized to be a result of the Major Force Project using double the amount of alien alloy and detonating a different type of bomb.

When he debuted, Major Force seemed to control matter much in the way Captain Atom controls energy. Therefore, he could project blasts of dark matter from his hands. He could manipulate this matter into various shapes and quantities. He used this ability to create a hand to replace one that was blown off by explosives implanted under his skin. He did not possess the ability to fly, but rather leapt great distances or traveled on ramps made of dark matter

He appears in the Batman: The Brave and the Bold episode "Powerless" where he breaks into a military facility and steals a device that increases his power. Captain Atom tries to stop him, but Force steals his powers with the device. Later, Force attacks the government and Batman, Aquaman, and Martian Manhunter try to stop. He manages to knock them all out, however, the powerless Captain Atom crashes a plane into him as a distraction. Not long after that, his device overloads and explodes, which causes Captain Atom to regain his powers, allowing him to defeat Force.

In this show he was voiced by Fred Tatasciore, who also voiced Mandarin in The Invincible Iron Man, Poseidon in God of War, Witch Doctor in LEGO Hero Factory, Tony Alpert in Battlefield Hardline and CLU in TRON: Uprising and TRON: Evolution.

Major Force appears as the secondary antagonist in the animated movie Superman/Batman: Public Enemies, voiced by Ricardo Chavira. His role in the film is very similar to that of the comic with the difference that he personally kills Metallo in order to frame Superman. It is hinted that he knew firsthand about Lex Luthor's plans for world domination and deliberately kept it a secret in exchange for Luthor allowing him to kill anyone he pleases (something Batman makes note of) . However given his attitude about serving his country he obviously either doesn’t know about luthors plan and or simply believes it’s what’s best for America for some really weird bizarre ad crazy reason. In the end, he is killed when Captain Atom succeeds in absorbing all the radiation that leaked out of a hole in his suit, otherwise it could've destroyed the whole city of Metropolis. In the movie, he has the power of flight, whereas he doesn't in the comics. 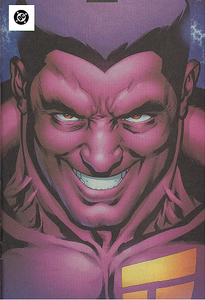 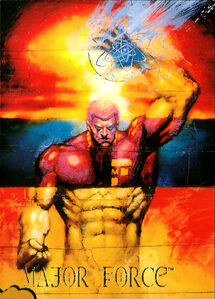 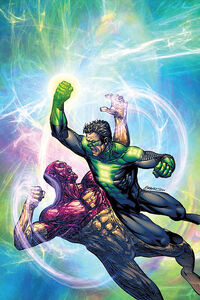 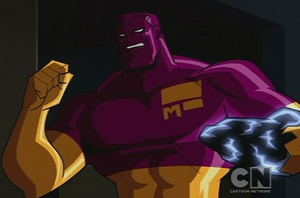 Major Force in Batman: The Brave and the Bold. 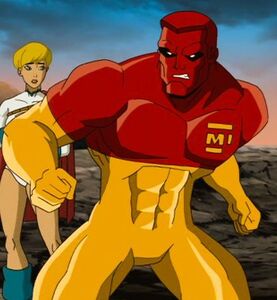 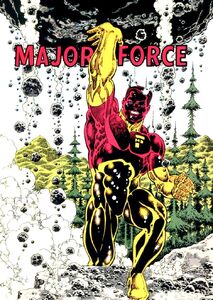 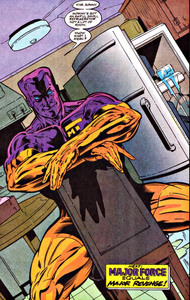 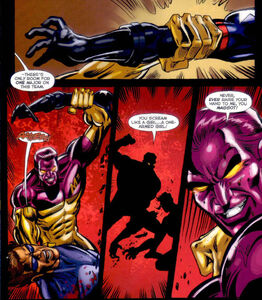 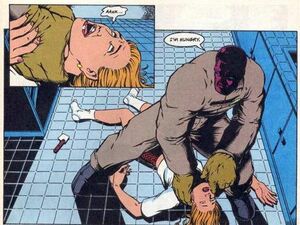 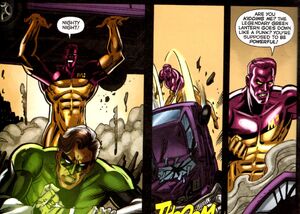 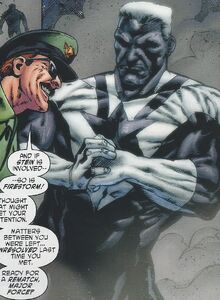 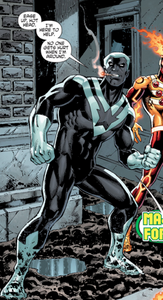 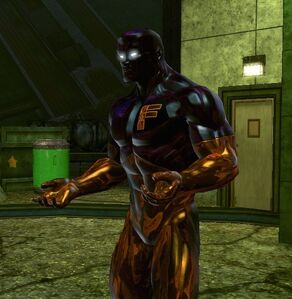 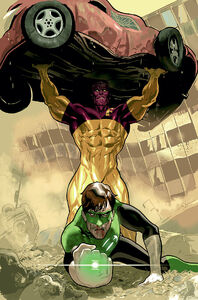 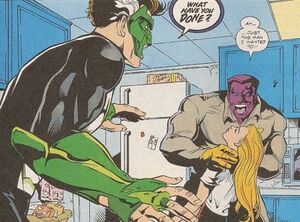 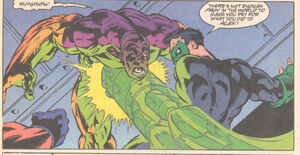 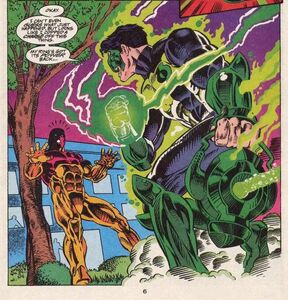 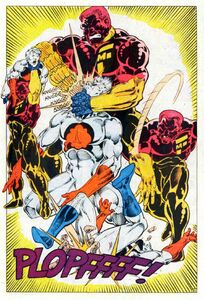 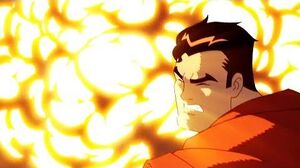 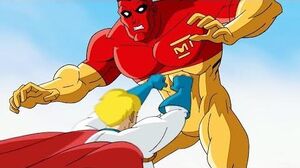