Find out who poisoned the coffee.
Kill Daisy Domergue.
(all succeeded)

Major Marquis Warren is one of the main protagonists of the 2015 thriller film The Hateful Eight. He is a ruthless bounty hunter who gets involved in a complicated conspiracy.

Warren was likely a slave before the American Civil War, as he mentions growing up on a plantation and fleeing to the North. During the Civil War, he allied with the Union forces to fight the Confederacy. Though he was finally able to take revenge on the group that had enslaved his people, he still resented his Union allies for the color of their skin, growing an incurable xenophobia towards white people.

Warren made his way up to major and grew a reputation for his high body count of Confederate soldiers, as well as Native Americans. He participated in the Battle of Baton Rouge, where he held off an attack by Confederate General Sanford Smithers. His reputation grew so large that the Confederate States put a bounty on him. He was captured by the Confederacy and imprisoned in Wellenbeck Prison Camp, but he managed to escape by burning the prison camp down. However, during his violent escape, he killed thirty-seven Union prisoners of war, letting them burn because they were white. Warren escaped back to the North but was investigated for the deaths of his Union allies. Though he wasn't criminally convicted, he was dishonorably discharged from the Army and drummed out with a yellow stripe painted down his back. This was likely because they couldn't prove that he intentionally killed his fellow Union soldiers, but the fact remained that he was still responsible for their deaths. Afterwards, Warren began his life as a bounty hunter. During this time, he forged a letter from President Abraham Lincoln so that he could claim that he was friends with the president; this earned him respect among the Union and allowed him social status.

Even years after the Civil War ended, Warren was still hunted by other bounty hunters, albeit for a decreased price. Each one that came after him, Warren would kill. One cold day in Wyoming, he was approached by another bounty hunter. After Warren bested him, the bounty hunter pleaded to be let go, and revealed himself to be Chester Smithers, son of General Sanford Smithers. Upon learning this, Warren forced Smithers to strip naked and walk for two hours in the bitter cold until he collapsed. Warren then forced Smithers to perform fellatio on him and presumably raped him, offering a blanket in exchange, but instead killed Smithers after the deed was done.

While traveling through Wyoming, Warren's horse fell ill and died. The Major was stranded out in the snow until he saw a carriage and waved it down. The carriage was pulling fellow bounty hunter John Ruth, who was transporting the dead bodies of three criminals, as well as the still-alive Daisy Domergue to Red Rock. Warren was able to bargain with Ruth for transportation, and he reluctantly agreed.

On the way to Red Rock, Ruth asked to see Warren's letter, and was warmed at the writing. When Domergue spat on the letter, Warren punched her so hard that she (still handcuffed to Ruth), fell out of the carriage. As the group get their affairs in order, they are flagged down by Chris Mannix. Suspicious of there being two people flagging down his carriage, Ruth requests that Warren put on handcuffs until he can sort things out, to which Warren reluctantly agrees.

After learning of who Mannix is and that he is on his way to be promoted to the sheriff of Red Rock, Ruth lets Warren take off his handcuffs. He lets Mannix join them, but only if he wears the cuffs, to which Mannix agrees.

During the trip, Mannix brings up Warren's history, informing Ruth of Warren's escape from Wellenbeck and how he murdered his allies because they were white. Still suspicious of Mannix, Ruth makes a deal with Warren to form an alliance and keep their bounties safe.

The group seeks refuge from a blizzard at Minnie's Haberdashery, a stagecoach lodge. However, upon hearing that the owners, Minnie and Sweet Dave, are not there, Warren grows suspicious. He volunteers to help the alleged keeper of the place, Bob, put away the horses, but interrogates him the whole time trying to find out if what he says is true.

Warren and Bob enter the lodge to meet Oswaldo Mobray, Joe Gage, and Sanford Smithers all resting there. Upon entering, Warren notices that one of Minnie's jelly bean jars is missing from the shelf. He then finds out Smithers' identity, and decides to keeptheir relation secret for the time being.

Later, as the group eats dinner, Mannix deduces that Warren's letter is a forgery to earn him leeway with white people, and Warren admits it, making Ruth angry at him. Warren then confronts Smithers about how he killed black people during the war, and mocks him. He then presents Smithers with a gun, and provokes him by graphically detailing how he tortured, raped, and murdered his son. Enraged, Smithers goes for the gun, and Warren shoots him dead, using the fact that he went for the gun as an excuse for self-defense and to ensure the legality of his murder.

However, when everyone's attention was on Warren's wicked story, someone poisoned the coffee, with only Domergue seeing who did it.

Ruth and the carriage driver, O.B., drink the coffee, and begin to vomit blood. Domergue takes advantage of the situation to steal one of Ruth's guns and shoot him dead. Warren disarms her and holds everyone except Mannix (who he knows to be innocent because he almost drank the coffee) at gunpoint attempting to figure out who is working to free Domergue.

Warren confronts Bob, explaining how Minnie hates Mexicans and would never leave her lodge in the care of one. Upon seeing a bloodstain on Sweet Dave's chair, Warren concludes that Bob is not who he says he is and shoots him dead.

Gage admits that he poisoned the coffee, but suddenly Jody Domergue, Daisy's brother, attacks from the basement and shoots Warren in the testicles. Mobray pulls a gun and shoots Mannix in the leg, but he returns fire and fatally shoots Mobray.

It turned out that Mobray (real name Pete Micox), Gage (real name Grouch Douglas), Bob (real name Marco the Mexican), Daisy, and Jody were all members of the infamous crime group called the Domergue Gang, led by Jody. The entire series of events was a conspiracy to free Daisy and kill Ruth, which they did by killing Minnie Sweet Dave, their servants, and their carriage drivers and hiding the bodies, and forging a story that they had left it in Bob's care. However, matters were complicated by Warren and Mannix's arrival.

Warren and Mannix, both fatally wounded, hold the gang members at gunpoint and threaten to kill Daisy if Jody does not come out of the basement. Jody agrees, and Warren shoots him in the head as soon as he climbs up. Daisy then tells Mannix that there are fifteen other gang members coming to them from Red Rock, and that if he kills Warren, she will let him live and claim all of the deceased members' bounties. Warren shoots Hicox dead, then Douglas pulls a hidden revolver and tries to kill them, but both Warren and Mannix shoot him dead. Warren tries to shoot Domergue, but is out of bullets. As Mannix faints from blood loss, Domergue goes for Douglas' gun, but Mannix revives and stops her. Warren convinces Mannix to hang Daisy from the rafters in honor of Ruth's wishes, and together they tie a noose and hang her.

As Warren and Mannix lie dying, Mannix reads the forged Lincoln letter, complimenting it. Warren thanks him. It is most likely that both of them died of their wounds. 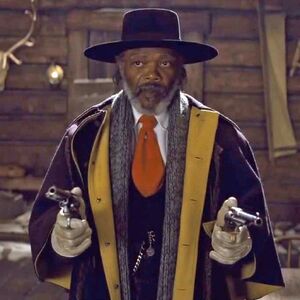 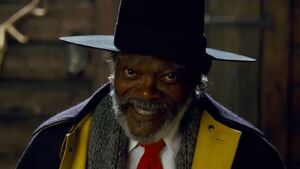 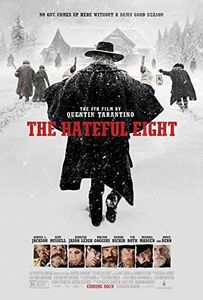 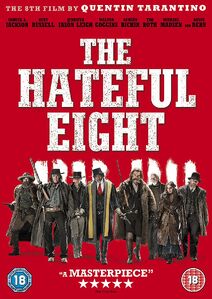