Break all of the cubits.

He was voiced by Rodger Bumpass.

Major Nixel was originally thought to be the Nixels' boss and leader. In reality, he is a high-ranking commander who works for King Nixel.

Major is a prominent villain for most of Season 1. His ultimate goal is to steal the Cubits everywhere from Mixels Land and destroy them so the Mixels cannot use their mixing powers, which is the only way said Mixels can defeat Nixels.

Many say that Major Nixel's worst moment was in the Mixed Up Special. In the Epic Comedy Adventure Minisode, he arguably crosses the Moral Event Horizon when he attacks the Mixels during their annual Mix Festival.  In the Special it was revealed that Major Nixel has an aircraft shaped like a metal cloud; he flies over the festival in the aircraft and drops a bomb-like weapon called a Mega Nixel Mixel Nixer on the Mixels, turning every Mixel within range to transform into a zombie-like version of themselves and destroying their Cubits in the process.

The MNMN also required many Nixels to be sacrificed. Fortunately, not all the Mixels were Nixed because all the tribe leaders had left the festival to get more hamlogna sandwiches after Zaptor ate them all.  Major Nixel at first celebrated his victory, but when they returned, the tribe leaders tried to attack Major Nixel, only to be chased away by a swarm of his minions.

Major Nixel attempted to chase after the Mixels as well, but instead ran out of breath quickly and instead decided to make cupcakes, revealing that he may be out of shape.

Meanwhile, the tribe leaders collected more Cubits from the top of Mixel Mountain by smashing a giant Rainbow Cubit which undid the effects of the Mega Nixel Mixel Nixer and fought their way back to the festival.  Then Major Nixel is humiliated in front of all the Mixels when the Flain/Gobba Mix smashes cupcakes in his face.  He then swears revenge on the Mixels as he storms away, only to trip and run away crying.

Major Nixel also appears in the Calling All Mixels app game as a boss.  He carries a military baton which he uses to attack Mixels by whacking them with it.  He can also call more Nixels.

On Cartoon Network's Calling All Mixels trailer, Major Nixel breaks the 4th wall multiple times by appearing on the screen and grabbing Cubits from the Mixels in the game.

Major Nixel does not actually appear at all in this episode until the very end, where he receives word from one of his spies that there are Mixels out in space. Frustrated by the news, Major Nixel claims that "if King Nixel gets word about this, he'll blow his top!". Major Nixel, long thought to have been the leader of the Nixels, approaches his now-known superior to address the news, which results in King Nixel shouting angrily. 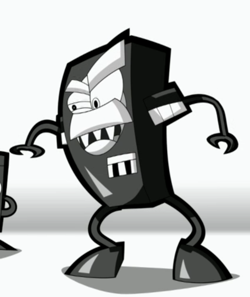 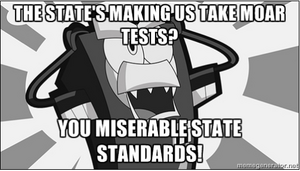 Major Nixel's villainous breakdown as he sees a mix.
Add a photo to this gallery
Retrieved from "https://villains.fandom.com/wiki/Major_Nixel?oldid=3795371"
Community content is available under CC-BY-SA unless otherwise noted.