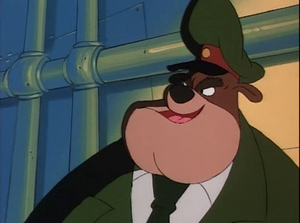 Major Synapse is the main villain in the episode "Heavy Mental" from Darkwing Duck.

He commanded the military unit of FOWL, until he made his troops march into an active volcano to secure it. As a punishment, he was demoted to the psychic division and given two hippies as underlings.

By using a strange device, he found out SHUSH's laboratory, where Dr. Sarah Bellum was testing her Norma Ray, a device that gives one psychic powers as long as the subject doesn't think while being subjected to the ray, on Launchpad, giving him psychic powers. Synapse offer the two hippies as test subjects to the ray, and as they turn into psychics themselves (naming themselves Hotshot and Flygirl), Synapse steals the Norma Ray and order the two to capture Darkwing Duck, taking him to his headquarters.

Once there, Darkwing is trapped in an ice cube while Flygirl holds a giant anvil over him. However, instead of finishing off, Synapse starts making a list of ridiculous exigences to The High Command, which gives Gosalyn and Launchpad enough time to bust into the place.

As Hotshot and Flygirl are smashed by the anvil, Synapse decides on using the Norma Ray on himself but overdoes it, becoming a disembodied head with a huge brain. As the heroes are unable to defeat him, Darkwing decides to use the Norma Ray on Synapse again while asking stupid trivia questions to force him to think. Synapse explodes, destroying the entire building on the process.

Retrieved from "https://villains.fandom.com/wiki/Major_Synapse?oldid=3890632"
Community content is available under CC-BY-SA unless otherwise noted.