Makeshift is a Decepticon in Transformers Prime, who was a Shifter, and thus had the ability to change into other robots and impersonate them. He only appeared in the episode Con Job, and the prequel novel Exiles, both times impersonating Autobots.

Before the Great War, 777 was a gladiator from the city of Kaon, where he first met Megatron. When the war broke out, he rallied under the Decepticon cause and became a bounty hunter, working in the untamed regions between Kaon and the Hydrax Plateau. to be added

He appeared in Con Job, in which he impersonated the Autobot Wheeljack. He managed to fool even Wheeljack's best friend; Bulkhead, with stories from Wheeljack's public service record but Bulkhead found out he was a fake when he told about the battle of Darkmount Pass. At the time Bulkhead had left the Wreckers but Wheeljack stated in his public service record that Bulkhead participated in the battle as a tribute to his friend. When he was found out he grabbed Bulkhead's female human friend Miko but was soon attacked by the recently escaped Wheeljack. The two fought with the real Wheeljack proving victorious.

Makeshift was tossed through a Groundbridge onto the Nemesis with a bomb attatched to his waist. He perished in the explosion. 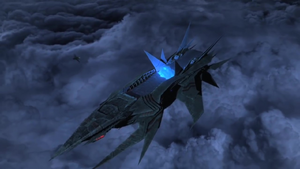 Makeshift's death
Add a photo to this gallery

Retrieved from "https://villains.fandom.com/wiki/Makeshift?oldid=3963982"
Community content is available under CC-BY-SA unless otherwise noted.