Leader and creator of the Ultralinks

Transforming and weaponizing himself
Linking to a host, such as the alien scientist who created him
Strength
Durability
Regeneration
Teleportation

He is not a cyborg, but a space overlord, and the ruler of the Ultralinks. He is indirectly responsible for Miles Dread gaining his power and is even more dangerous than Dread. His main goals are to kill Max Steel, destroy Earth and rule (later destroy) the universe. He was also the one who destroyed Ja'em Mk'rah's home planet, Takion.

He is voiced by Michael Dobson.

While not linked, Makino was a small Ultralink. He had 6 legs, a dark blue body, a yellow eye, and markings that are yellow.

While linked with his alien creator, Makino was transformed into a wide, bulky, and brutal being, and was on the scientist's head. In this form, he had letters that suddenly appear and disappear. He also had dark blue armor with a yellow core, which was his weakspot.

In his helmet form, he did not look like an Ultralink at all. However, he still had a dark blue body and a yellow eye. His helmet form was also on Ja'em Mk'rah for a short time, which gave Mk'rah yellow eyes in his brainwashing state.

While linked with Max McGrath, he was located on Max's chest. His armor now has light blue, dark blue, black, and white tints. He also appeared as a humanoid being with bulky armor.

Being an artificial intelligence of pure evil, Makino was sadistic, destructive, megalomaniacal and despotic. Back to where he was created, Makino chose to be evil, first forcefully linking with his scientist, and murdering the scientist’s robotic assistant. He eventually proved to be a murderous mastermind who had no qualms about destroying life on other planets on his quest to rule the universe, watching the absorption of the homeworlds with glee.

Makino was also wrathful and quick to anger, as he hated Max Steel ever since they met, willing to destroy him and get him out of the way. He has also hated N-Tek, an organization made on Earth to destroy Makino and his Ultralinks, so he left Earth and absorbed other planets until the right timing.

However, despite this, his goals have rapidly changed between the two seasons and the short films: he became omnicidal as he was willing, above all else, to destroy all existence, thus “the end of all things” he said. However, even then, he was stopped by his nemesis, Max Steel, who threw him into the Sun and destroyed him, thus giving Makino his comeuppance.

Makino is an extremely powerful villain. Going as far to be a reality-warper, he has many powers and abilities: 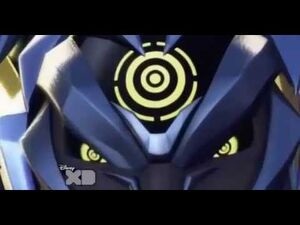 Makino's evil glare.
Add a photo to this gallery 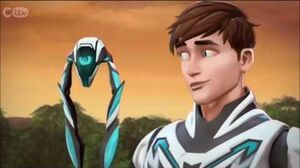 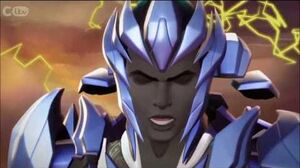 Retrieved from "https://villains.fandom.com/wiki/Makino_(2013_TV_series)?oldid=4231769"
Community content is available under CC-BY-SA unless otherwise noted.