Major of the GHQ

Possess the power of Voild Genome and become immortal

Segai Waltz Makoto is one of the antagonists in Guilty Crown.

A Major in the GHQ Anti-Bodies and a major antagonist. A charming, eccentric man wearing clown-like make up and a prosthetic left eye. He is a sharp and experienced man who is able to investigate and get any information from its sources. He enjoys chatting with people and playing games on his cellphone, yet, at the same time, he is very sadistic and manipulative and uses whatever means against anyone. He's for the most part calm, and remains like that even if he's in dangerous situations. He seems to enjoy his work like a game, although he does take his job seriously. As Shuuichiro's second-in-command, he and the Anti-Bodies free Shuichiro from his house arrest by causing another Apocalypse Virus outbreak.

After Shuichiro gave Major Segai the information he wanted, and declared his role in the coup d'état over, Major Segai helps Gai, Ayase and Haruka locate where Shuichiro was. After the events of the 2nd Apocalypse Virus outbreak, Major Sagai becomes the new leader of the Anti-Bodies. Major Sagai also becomes interested in the Void Genome and decides to gain it for himself to embrace the Void's light. However, Shu regains the Genome and kills Major Segai with Yahiro's Void.

Segai is a smart and cunning character who manipulates people to get the information he wants. Shuuichirou states that Segai will hunt down a worthy prey with all his energy and then hang it up to dry. Segai has no loyalties and would usually follow his own interests, which is evident when he, after being fascinated by Voids, wanted to restore Shu's Void powers as he sees it as beautiful.

Before the events of Guilty Crown, Segai was hunting down Scrooge. Scrooge wanted to meet Segai, while pretending to be cornered by him, because he had thought Segai knew something about Da'ath, but this was later found out to be a false assumption. When Scrooge had used his Void, Segai had watched in fascination. This caused him to be distracted as a shard hit his left eye and he fell unconscious.

Years later, Segai later replaced his disfunctional eye with a mechanical one and dyed his hair for unknown reasons. Segai is seen in a room after he receives his "work e-mail" and returns his attention to what he was doing. He looks at a man who was hanging by a rope and says "to talk, or not to talk, is the question" and orders some men in the room to "roll him".

Later, he is seen telling Shu he was under arrest after Shu was betrayed and pushed out of a train on a short stop by Yahiro. Segai arrests Shu and takes him to prison where he is asked a few questions. Shu however, remains silent and talks to Shuuchichirou about it. He shows Segai a video that was sent in just 7 minutes before (showing Gai warning the GHQ that they will attack to save their comrade). Segai says he has a idea and moves Shu to see the reason why Yahiro betrayed him. They see Yahiro's younger brother Jun, who is still infected with the Apocalypse Virus, and has reached stage 4. Segai explains that Yahiro doesn't take the drugs but he sells it instead, because he needs the money to help his brother. They go inside a room and he says that he cannot forgive Undertaker because they disrupt the peace that the GHQ are trying to maintain. Shu argues this, saying that people were killed right in front of his eyes by "you people" and Segai calmly replies that they were unregistered citizens and Shu asks if that was a good reason to kill them. After revealing that Gai intended to save the mass murderer, Kido Kenji, the cause of the Sky Tree

Bombing, he gives Shu a special pen. He explains that the pen is a transmitter that he should press anytime he is near Gai to put the appropriate punishment on him. When Undertaker arrives to rescue Kido, Segai receives orders not to interfere but he goes anyway and shoots a sniper, saying not to "get in his way".He then looks up in amazement at Shu's power, calling it "beautiful". He eventually leads an assault on one of the last Funeral Parlor strongholds, whilst allowing Shu to regain the Power of the Kings out of fascination. Afterwards, he tries to kill Ayase by hitting her with a semi truck. Shu respond by using the Shears of Life to sever his connection to life. He allows it, wanting to know how it felt to have someone's soul inside him. 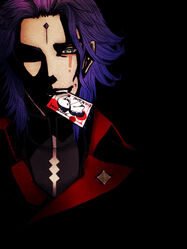 A ROYAL GUN SALUTE TO MARK THE KING'S BIRTH

Today we will have a party! 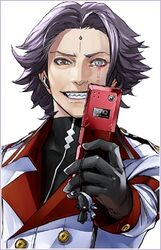 Segai trollin
Add a photo to this gallery

Retrieved from "https://villains.fandom.com/wiki/Makoto_Waltz_Segai?oldid=3890639"
Community content is available under CC-BY-SA unless otherwise noted.