Become the Alpha Lion (succeeded, for a while).

He was voiced by Alec Baldwin who also played Nicholas Kudrow, Dennis in The SpongeBob SquarePants Movie, Larry Quinn, and Donald Trump.

Makunga is seen at the beginning of the film, where Zuba is playing with his young son Alakay. Zuba asks Makunga why he wants to become Alpha Lion to which he responds, "I'm better looking, I have better hair. I'm deceivingly smart. And I want everyone else to do what I say." While Zuba fights Makunga, (and defeats him rather easily), Alakay wanders off, getting captured by poachers and eventually ending up in New York and is renamed Alex.

Years later, an adult Alex and his friends wind up in Africa, and Alex reunites with his parents. Makunga thinks of using him as an advantage to finally become the Alpha lion. At Alex's welcoming ceremony, Makunga suddenly stops the celebration and reminds Zuba that Alex must perform the Rite of Passage in order to be officially accepted into the pride. Alex, believing it to be a breeze, accepts the opportunity.

As Alex prepares for the Rite of Passage, Makunga comes along and tricks him into choosing Teetsi (a large, slender, muscular lion who is also Makunga's henchman) as his opponent. As Alex "fights" With Teetsi (mistaking it to be a dance battle), Makunga laughs, saying to himself, "This is even better than i thought!" When Alex loses the fight, Makunga dethroned Zuba as Alpha lion and banished him, Alex and Florrie and makes Alex wear the Hat of Shame (which is a ridiculous-looking coconut shell decorated with a whole bunch of fruit at the top).

When the water hole is dried, Makunga suggests that the animals would have to fight for the water. When the animals object to this insane proposal, Makunga tells them if they're thirsty they'll have to look for water off the reserve. The animals object to this notion as well, knowing that poachers are outside the reserve. However, Alex steps in and states that he himself went off the reserve and survived. He then states that he himself will leave the reserve to bring the water back. While the other animals are amazed at Alex's bravery, Makunga laughs derisively at him and sarcastically suggests to the young lion that he do a rain dance. Determined to prove the pompous Makunga wrong, Alex sets off on his quest and Makunga continues to insult and mock him as he leaves. Realizing Makunga has no regard for anybody but himself, the animals criticize his leadership and demand Zuba back, making Makunga seethe with fury.

After the dam was destroyed and the water was returned, Alex and Zuba trick Makunga by giving Nana's handbag to him as a "token of appreciation", then releasing the old lady. When Nana sees Makunga holding her purse, she proceeds to attack him as she kicks him in the crotch, stomps on his foot, whacks his paw with a ruler, wet-willies, arm-burns and spanks him, before dragging him away by the ear as the other animals cheer happily.

Makunga is very greedy, mean, cunning, egotistical, and overall conceited in nature. Makunga is also especially sly, sneaky, deceitful, and manipulative, as he tricked Alex into challenging huge bulky lion Teetsi, knowing full well Alex would easily lose and Zuba wouldn't have it in him to banish his son for his failure, thus Zuba resigns the alfa lion position and Makunga takes it.

When Makunga takes the role of the alpha lion, he is not very good at it, due to his incompetence he tries to hide and he comes up with insane solutions to the water drought (like having to fight for the water or leaving the reserve to find it). All in all, Makunga's supreme ego leads to his downfall when Alex tricks him by giving him Nana's purse as a gift, then releases the old lady, who proceeds to give the pompous jerk the beating he deserves.

Makunga is a fat dark tan lion with green eyes and a black mane with a gray streak in it (when he is older). 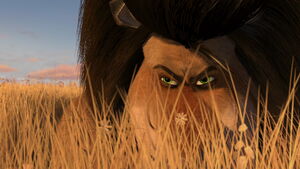 Makunga spying on Zuba as he tries to teach young Alex how to fight, but is facing extreme difficulty (as the cub is more interesting in dancing). 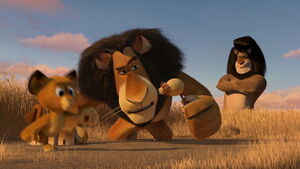 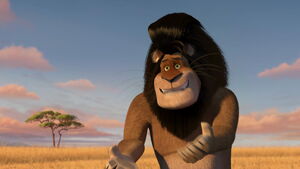 "Look at the bright side, Zuba. After I defeat you and take over as Alfa Lion, you'll have so much more time to spend with your pathetic excuse of a son!" 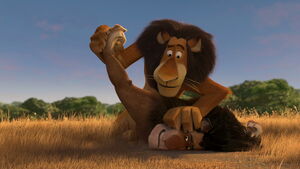 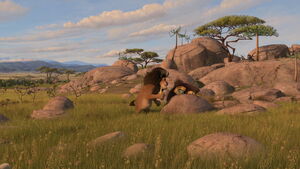 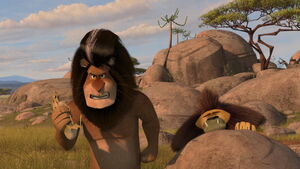 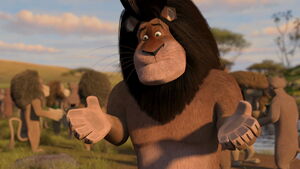 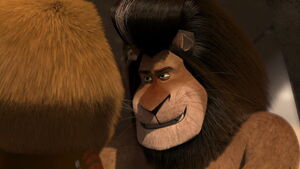 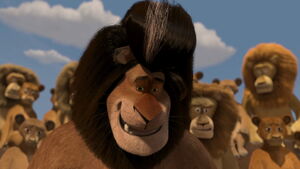 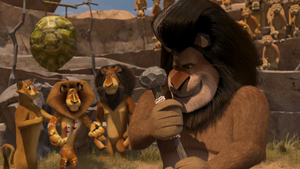 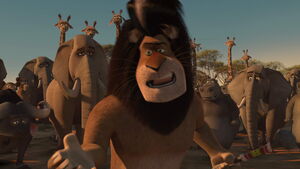 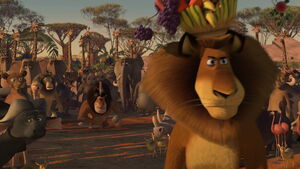 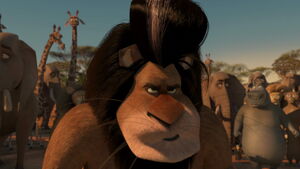 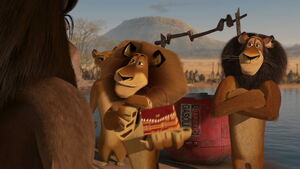 Alex tricking Makunga by handing him Nana's purse, then unleashing the old lady to attack him. 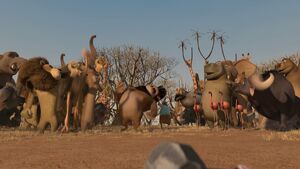 Makunga's defeat while being pummeled and dragged by the ear by Nana.
Add a photo to this gallery

Retrieved from "https://villains.fandom.com/wiki/Makunga?oldid=2463619"
Community content is available under CC-BY-SA unless otherwise noted.