Ability to disguise himself as a human

Kidnap Calumon and take him to the Digimon Sovereign.

He was voiced by Joe Ochman.

Makuramon first appeared in the guise of a human (after bio-emerging around the same time as Indramon) and spied on the Tamers for a while, being noticeably interested in Calumon. For example, he appeared during a game of Hide and Seek and even tried to steal Takato's D-Power. When he watched the battle between Leomon and Kumbhiramon he finally realized that Calumon was the Shining Digivolution. When Vikaralamon Bio-Emerged, he revealed his true form and told the Tamers about their goals - to get more power so that they can defeat their enemies. He then used his Primal Orb to cause a failure in the Juggernaut program and when Vikaralamon was defeated he kidnapped Calumon. He then fled to the Digital World but during his reentry, he lost Calumon and thus had to search for him. During this search, he frequently clashed with the Tamers who also went to the Digital World to search for Calumon. He and Majiramon searched for Calumon together, but Majiramon was destroyed by Cyberdramon. Later, he saw Suzie wondering in the Digital World and he attempts to kidnap her until she was rescued by her Digimon, Antylamon.

Makuramon had reappeared while Beelzemon during the fight with Megidramon and blamed him on the near destruction of the Digital World, as well as to chastise him, as Makuramon considered himself superior and told Beelzemon that Caturamon had "wasted power" on him by giving him the ability to digivolve. Angrily, Beelzemon grabs him by the face, stating that he talks too much. And with that, he proceeded to kill and absorb the screaming monkey by crushing his head until he was destroyed.

He serves the Four Holy Beasts member, Baihumon, and is one of the Twelve Devas. He has an inexpressive face and does not speak. He expresses feelings with the movement of his body. He is a Pacifist. He shoots the "Treasure Ball" at those he likes to target. 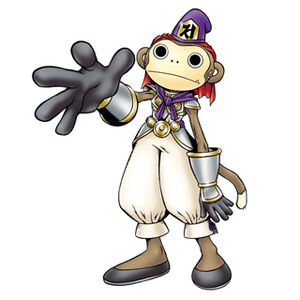