Leader of the crocodiles of The Pride Lands

Being arrogant and selfish.
Disrespecting the Circle of Life (all formerly).
Eating fish.

Defeat Pua in a fight to become leader of the crocodiles (succeeded).

Have the right to eat as much fish as they want at Big Springs for his float.
Take over Flood Plains (both failed).

He is voiced by Blair Underwood.

The Lion Guard: Return of the Roar

Makuu makes a brief appearance in this film when Bunga jumps onto his head. Makuu lifts himself out of the water in annoyance and growls at Kion, who is following suit.

The Rise of Makuu

Makuu appeared as the main antagonist in this episode.

Makuu accuses the leader of the crocodiles Pua of being a coward for refusing the offset of The Circle of Life by hunting fish in Big Springs and challenges him to a mashindano, believing that the float has a right to eat fish from Big Springs. Whilst being watched on by a crowd of animals including Kion, Bunga, Beshte, Fuli, Kiara, Simba, Nala, Tiifu and Zuri, Makuu wins the battle and becomes the new leader of the crocodiles and is congratulated by Simba who then thanks Pua for his service as a leader. Pua thanks the King before leaving (as in tradition if the leader is defeated, they are banished from the fleet). Makuu then taunts Pua as he leaves (but Pua ignores him) before being chanted on by his fleet. Kion then wonders if Makuu's new position might bring bad news to The Pride Lands. This eventually comes true when Makuu takes over Big Springs and forces the other animals to switch habitats.

Kion confronts Makuu, asking him to leave Big Springs, but the crocodile refuses, mocking Kion for being unwilling to fight. Though Bunga encourages Kion to use the Roar of the Elders, the cub decides against it, not wanting to be like his great-uncle Scar and lash out in anger. Instead, Kion goes to Pua, asking for him to call for another mashindano, but Pua reminds Kion that Makuu is much stronger than him. He then advises Kion to back down if he's not willing to fight Makuu.

After Kion encounters Mufasa, he and his friends decide to demonstrate the Roar of the Elders on a grove of trees to show Makuu what he would be in for if he should attempt a fight. While Bunga, Fuli, and Ono set out to clear the grove of animals, Beshte and Kion confront Makuu. When Ono gives the signal, Kion roars into the trees, clearing them all of their branches. In awe, Makuu backs down and leads his float out of Big Springs.

As the crocodiles leave, the hippos' leader and Beshte's father Basi tells Makuu that he is welcome to return to Big Springs when there's enough fish and all he has to do is ask.

Makuu makes two small non-speaking appearances, first when preparing to eat a fish, only for it to be taken by jackal pups.

He later appears with the other Pride Land animals celebrating Kupatana.

Makuu makes another appearance in "Never Roar Again", where he serves as the main antagonist of the episode (with Janja as the secondary antagonist). After Kion uses the Roar to save his mother from Janja and his clan, he inadvertently causes an earthquake which nearly kills Nala. As a result, Kion vows never to use it again. Makuu overhears this and decides to take advantage of it by taking over the entire Flood Plains.

Fuli, Beshte, and Bunga try to fight them, but the crocodiles eventually gain the upper hand. Kion and Nala arrive, and Makuu takes Nala hostage and taunts Kion, knowing that he would never endanger his mother again. However, Kion learns to use the Roar to hit certain targets, so he uses it to knock out Makuu and his crocodiles without harming Nala.

"Beshte and the Hippo Lanes"

Makuu makes another appearance in this episode where he and one of the other crocs from his float attempt to eat a young rhino calf tangled in the weeds. Fortunately, Besthe and his father arrive and scare them off.

Later on, after Besthe messes up the Hippo Lanes his dad helps him correct them. Unfortunately, due to getting his leg broke by the rhino calf, Basi falls behind. While catching his breath Makuu and his float see him there and attempt to get rid of him so they can do whatever they want in the Flood Plains. Besthe quickly sees this and tries to hold them back, when out of nowhere a herd of sable antelope let in by Kion on and the rest of the Lion Guard trample them and Beshte tells Makuu to use the Floodplains to get away while he and his float can.

Makuu appears only near the end of this episode, after Mwenzi the tick bird thinks he's been replaced by his best friend Kifaru the rhino he flies off, but Ono soon finds him sitting on a branch over a waterhole where Makuu and his crocodiles hang out. Makuu soon hears the two birds talking and attempts to eat them. Ono escapes, but Mwenzi injures his wing. Soon Kifaru and the Lion Guard arrive and drive off the crocs, just before doing so Kifaru horns Makuu sending him flying.

Makuu is a boastful, conceited, neglectful, egotistical, and vainglorious crocodile who loves to bask in the attention of others. He can be a bit of a showoff, as seen when he flamboyantly sees Pua out of the float, and rarely shows respect for other creatures.

Unlike his predecessor, Makuu has no respect for tradition or the Circle of Life, and certainly not for authority (except his own), seeing both Pua and Kion as weak, cowardly, pusillanimous, and timorous. He appears to only respond to strength and power, as he was awestruck by the Roar of the Elders and gave into Kion's second demand to leave Big Springs while trying to save face.

However, his partaking in the Kupatana celebration indicates that he has come to respect the Circle of Life, as he, along with another crocodile, kindly allow a mouse to pass between them. He reverts back to his old ways in "Never Roar Again", as he attempts to take over the Flood Plains when Kion vows to never use the Roar of the Elders again. 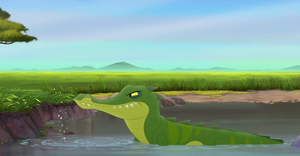 Makuu annoyed at Bunga jumping on him. 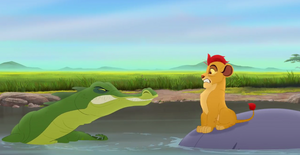 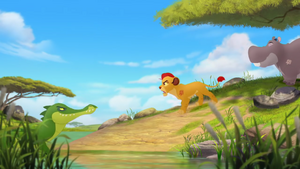 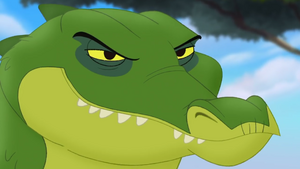