Finding all of the Shen Gong Wu and become the Fearsome Four.

Cause destruction upon the world.

Ancient Demon
Mala Mala Jong is an ancient demon warrior made up entirely of Shen Gong Wu. He appeared first in the episode of the same name. He is controlled by Wuya in trying to defeat the Xiaolin Monks.

Mala Mala Jong is an ancient evil demonic warrior made up of the Helmet of Jong, the Heart of Jong, the Two-Ton Tunic, Jetbootsu, Fist of Tebigong, Third-Arm Sash, Shroud of Shadows, Eye of Dashi, Logi Kite, and possibly any other Shen Gong Wu it can acquire.

The Xiaolin Warriors arrive at a forest to search for the Heart of Jong. After a squirrel attacked him, Omi finds the Heart of Jong, but Jack manages to grab it from him. Jack tries to escape, but is prevented from doing so by Clay Bailey, and a Xiaolin Showdown follows. In keeping with the forest's environment, Omi challenges Jack to an acorn collecting competition; whoever can collect more acorns before the time runs out will win the Heart of Jong. Omi chooses to use the Jetbootsu, and does well at first, while Jack uses the Lotus Twister to stretch his arms. Jack, however, wins the showdown, and now has the Jetbootsu and the Heart of Jong to add to his section on the spreadsheet.

After Jack Spicer first assembled Mala Mala Jong, Wuya abandoned Jack for Mala Mala Jong and invaded the Xiaolin Temple with it. The monks do their best, but are no match for the Shen Gong Wu warrior. Wuya tries to find the other Shen Gong Wu, but Master Fung tells her that the Chosen Ones have them, and that they left the temple. She fumes when she discovers that not even Master Fung knows where they are.Jong was eventually defeated by Omi, who used the Serpent's Tail to get to the center of the Earth and retrieve the Golden Tiger Claws, with which he went inside and removed the Heart of Jong, destroying the evil threat. Jong later returned as part of an occurrence that happens every 1,000 years, when the planets line up, reuniting the Shen Gong Wu into Mala Mala Jong. Jong used the Ring of the Nine Dragons to split into the Fearsome Four, and went after the Emperor Scorpion. Each Jong of the Fearsome Four somehow got differences: One of them wears the Orb of Tornami around its neck; the other has the Eye of Dashi; the other has the Ruby of Ramses and the last one has the Star Hanabi; three of the Fearsome Four wears the Wushu Helmet, and the other wears the Helmet of Jong. Jack Spicer controlled the Fearsome Four using the Emperor Scorpion for a time, but they lost to the Xiaolin Dragons in a Xiaolin Showdown. Mala Mala Jong made a cameo in "Time after Time (2)"It/They are aligned with the Heylin.

As the planets align themselves, once every thousand years, the Shen Gong Wu becomes active and floats away to form Mala Mala Jong. This time, he will be made out of many more Shen Gong Wu, which will create three other versions of him, thus forming the Fearsome Four.

They barged their way into Jack Spicer's house, where the Fearsome Four were giving it a renovation. Kimiko used the Golden Tiger Claws to kick the Emperor Scorpion out of Jack's hand. The Xiaolin warriors and the Fearsome Four, no longer controlled by Jack, touched the Emperor Scorpion all at the same time, thus declaring an eight way Xiaolin Showdown. Omi wagered the Falcon's Eye, while the Fearsome Four wagered the Orb of Tornami. In the showdown, everyone was hanging onto a rope, dangling from the ceiling in a dark arena. The objective was to knock over which opponent's team first. They've managed to knock down two of the Fearsome Four, but almost all of the Xiaolin Dragons were defeated, except for Omi. In order to help him, Kimiko used her elemental powers to lighten up the arena. This helped Omi take the Orb of Tornami and used it to defeat the last two of the Fearsome Four. As Omi won the Emperor Scorpion, he was about to use it to destroy Mala Mala Jong, but not before making them play basketball with using Spicer as the ball.

Mala Mala Jong makes a cameo appearance along with the other Heylin villains prepare an attack on the Xiaolin Temple and to fight the Xiaolin Monks. It is unknown if He was converted back into Shen Gong Wu or remain alive after the battle.

Mala Mala Jong is assembled by using the Heart of Jong to animate a set of Shen Gong Wu that become his body. They are: 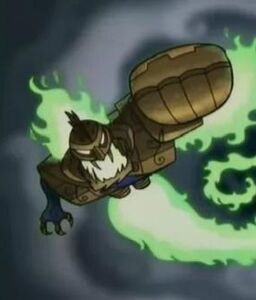 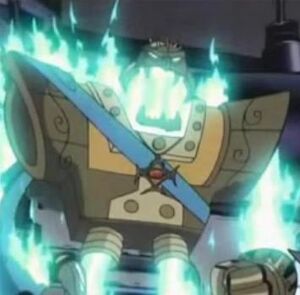 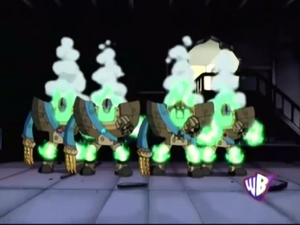 Fearsome Four
Add a photo to this gallery

Retrieved from "https://villains.fandom.com/wiki/Mala_Mala_Jong?oldid=3571956"
Community content is available under CC-BY-SA unless otherwise noted.