Villains Wiki
Register
Don't have an account?
Sign In
Advertisement
in: Female, Siblings, Partners in Crime,
and 20 more

Melanie and Miltiades "Miltia" Malachite, or better known as the Malachite Sisters, are a pair of black-haired twins in the world of Remnants and minor antagonists of RWBY. The twin sisters first appear in the "Yellow" Trailer as the secondary antagonists and are shown to be bodyguards working for Junior.

Melanie is a girl in her teenage years. Having black hair and green eyes, she wears a white dress with a cyan tint in some places and white shoes with blades attached at the heels. She also wears a flower hairpin, a white scarf, white gloves, "wings", a silver belt, and makeup.

Miltia is a similar age to her sister and with similar eyes and hair but wears a red dress, gloves, and boots. She also wears feathers above her ear.

Although having a lack of lines, Melanie seems to have an arrogant and confident personality. Militia also has little lines but is more kind and shy than her sister.

Both seem to be pretty high tastes with other men, being distasteful with Neptune when he greets them.

Over a decade before the series, the girls lived in Minstril and were under the care of Roman Torchwick. They annoyed him so much he set up a failed scam to get their mother to distrust him with their safety.

Their mother sent them to Vale under the guise of student years later; to hunt down Roman after ger betrayed and fled the Spiders. Where they picked on Trivia Vanille, a mute girl who could create illusions. Eventually they caught Roman, but Trivia saved him as she hated the twins.

After the school shut down and their mother fled back to their both continent, the twins entered the employ of Xiong Junior to make a living.

In the trailer, both are first seen in a bar nearby Junior, but he then later makes them leave when Yang sits nearby. When the girl attacks him, he sends out his henchmen, which she beats. After he tries using his main two goons, Miltia and Melanie after them, and although they do hold then own for a while, both are then taken out by Yang.

The two make a small appearance, both sitting nearby the club as they watch Yang talk to Junior. They then leave after Neptune tries and fails to flirt with them.

The Malachite Twins appear as units in RWBY: Amity Arena. They are a pair of melee fighters that swap out frequently during the battle, allowing them to stay active for longer.

Melanie mostly uses an acrobatic style of combat, mainly using powerful kicks with the blades on her heels. Milita compliments this by mostly using her acrobatic style with clawed gloved. Both twins have a respectful amount of strength and agility.

When both twins fight together, they fight to help the other, using flanking and distracting moves to leave an opening for the other or to prohibit attacks. 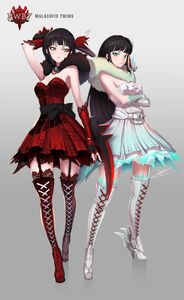 The Malachite Twins as they appear in RWBY: Amity Arena. 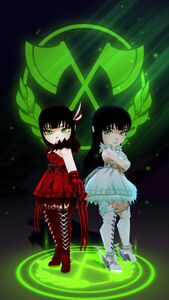