Plotting.
Luring prey and then killing them.

Malamar (in Japanese: カラマネロ, Calamanero), also known as the Overturning Pokémon, is a prominent antagonist in multiple Pokémon the Series: XY episodes and the main antagonist of the episodes "A Conspiracy To Conquer!" and "Facing The Grand Design!" and the archenemy of Officer Jenny and James' Inkay. It is a psychotic predator that wants to distort the Pokémon world.

Malamar was voiced by Kensuke Satō in the original Japanese version and by Marc Thompson in the English version.

In the games, there is no Malamar that can be classified as a villain. However, Xerosic, one of Team Flare's top scientist, has a Malamar as one of his Pokémon. Another Pokémon Trainer named Emma, when she was processed by Xerosic, under the alias of Essentia, also has a Malamar in one of her four parties, though it's presumed that the Malamar originally belonged to Xerosic.

In the anime, one Malamar appeared in the episode, A Conspiracy To Conquer. This Malamar is an evil psychopathic Pokémon that seeks to take over the world. When Officer Jenny was sent to investigate a few disturbances at the radio observatory. However, as soon as she reached the observatory, Malamar appeared in front of her, and hypnotized her to pose as a criminal by the name of Madame X. Malamar then processed by possessing other Pokémon including a Scolipede, an Exploud, a Pangoro, a Beedrill, and a Noivern.

Some time afterwards, Malamar and Madame X came across Jessie, James, and Meowth, trying to figure out how to separate Ash from Pikachu. Malamar overheard them on how strong Pikachu is, and sought to add Pikachu to it's army. Malamar then possessed Jessie, James, and their Pokémon, adding them to it's army. Malamar then attempted to possess Meowth, but Meowth used Fury Swipes on himself to prevent himself from being possessed. Meowth then ran off to warn Ash and his friends about Madame X and Malamar, but Malamar commanded the possessed Team Rocket to follow him.

After Meowth found Ash and his friends, and warned them about Madame X and Malamar, Malamar, Madame X, and the possessed Team Rocket arrived to capture Pikachu. Malamar used Psychic on Pikachu and successfully capture Pikachu. Malamar along with the possessed minion retreated to the radio observatory. When they return to the hideout, Malamar used Hypnosis on Pikachu and made him a member of his army. However, as soon as Malamar completed the hypnotic trance, Ash and his friends, and Meowth found "Madame X's" hideout and went on a search for Pikachu. Malamar successfully managed to hypnotized Clemont, Bonnie, and Serena. Malamar attempted to possess Ash and Meowth, but Meowth used Fury Swipes on himself and Ash to prevent being possessed. "Madame X" then showed all the powerful Pokémon they successfully possessed, as well as commanded the possessed Pikachu to attack Ash. While Ash was trying to get through to Pikachu, a machine that Clemont invented early on, that was designed to track down Pikachu's electrical energy, reactivated itself, and rammed right into Malamar. By doing so, all those that were possessed by Malamar were freed, including Madame X, who they found out was Officer Jenny possessed by Malamar.

This unexpected discovery causes the gang to realize that Malamar tricked them into believing that "Madame X" is a real person and the entire story of her taking over the world was a lie. Malamar then explained that it did all this so it can take over the world. Malamar then retreated to a room where it was making something known as the Ultimate Weapon. However, Malamar had no choice but to destroy the weapon as Ash and his friends, Team Rocket, and Officer Jenny saw it, which resulted in the radio observatory falling apart. After the observatory was destroyed, and the others managed to escape, Malamar flies off, making new plans to take over the world.

In Facing the Grand Design!, it returned along with two other evil Malamar in a different plan to take over the world. Prior to their plan, they hypnotized the Kalos region's most intelligent scientists to create large energy crystals so they can activate their device similar to the one from the radio observatory in use as a weapon. Afterwards, they stole three delivery trucks and drove up to a mountain called Grace Tower in order to complete their plans. But, when Team Rocket was spying on them due to Inkay causing a ruckus, Malamar ordered its accomplices to search and follow them. They managed to find them along with Officer Jenny (the same one from the previous encounter), Ash, and his friends. But when they attempted to capture everyone with Psychic, Inkay blinded one of the Malamar with its ink, giving Clemont, James, and Meowth a chance to escape and to get help. However, one of the Malamar followed them to the forest, captured them with Psychic, and blasted off some forest Pokémon with Hyper Beam. Malamar tried to persuade the good Malamar into joining its plans of conquering the world, but the good Malamar and Inkay refused to take part of the action and chased it off with Psycho Cut and Flamethrower.

Meanwhile at Grace Tower, Malamar revealed to Officer Jenny, Jessie, Ash, and his friends the true nature of its plan: to distort the Pokémon world and alternate the environment that suits them. As the plan began to fall into place, Clemont, James, and Meowth arrived in time to rescue their friends with some help from the good Malamar and Inkay they met in the forest. Malamar suddenly grabbed James' Inkay and proceeded in hypnotizing it to attack everyone. But James managed to save Inkay by feeding it a croissant and helped it remember the good times they've had. Inkay then battled the Malamar and managed to defeat them. Officer Jenny disabled the crystal's activation with her Manectric's Thunder and ordered the evil Malamar trio to come with her if they know what's best for them. However, they claimed that they are heading into the future and swore that they will fight again and their plan will succeed. Soon, the three evil Malamar escaped into the sky with the crystals and destroyed every evidence of their plans, causing everyone to retreat safely from the mountain.

Malamar is a dark purple squid-like Pokémon. It has a pair of tentacles on the bottom of its body that function as its legs. Malamar's main body has six light yellow spots on the front and back and a light-yellow stripe nearly wrapping around its body above the spots. Its arm-like tendrils have grown scythe-like in appearance. Malamar has a red beak, black eyes with yellow irises and wavy "hair" made of eight tentacles. It possesses strong hypnotic powers, which it uses to force others to do its bidding. It can lure prey with hypnotic motions before it wraps its tentacles around the prey, then it finishes off with digestive fluids. 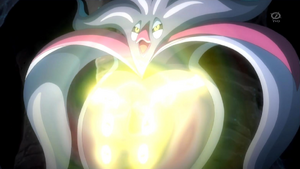 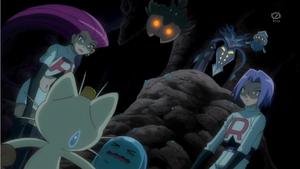 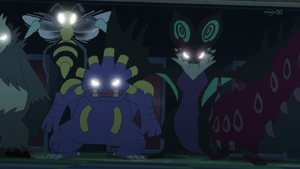 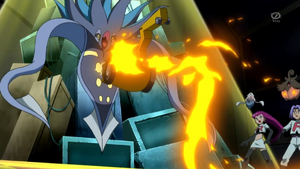 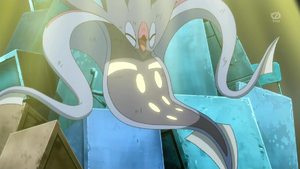 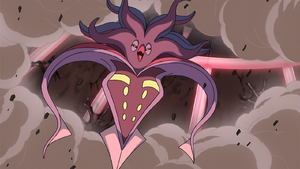 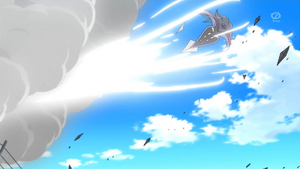 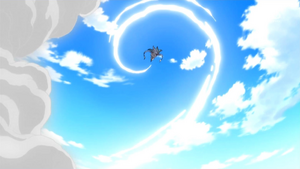 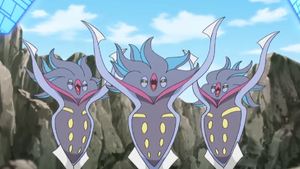 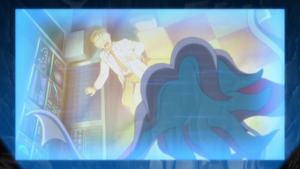 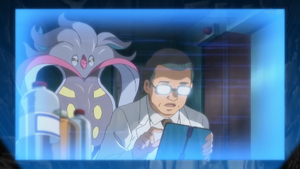 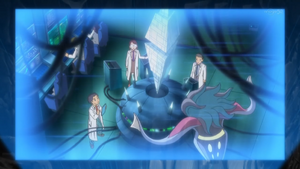 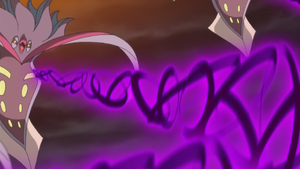 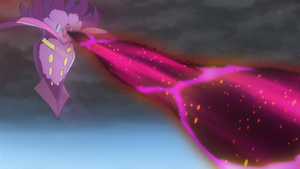 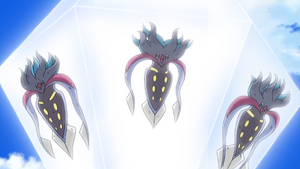