Malchior is the main antagonist of the Teen Titans episode "Spellbound". He is a powerful dragon and a special enemy of Raven.

He was voiced by Greg Ellis, who also voiced Punk Rocket in the series as well.

Malchior is first mentioned in a book read by Raven. In the book, Malchior faces the wizard, Rorek of Nol. The dragon was more superior to Rorek, so Rorek trapped Malchior inside his spellbook with a powerful curse. Raven later owned the book sometime ago. When Raven wanted to stay alone to read the book, Malchior made his move.

He tricked Raven into believing that the roles in the battle were reversed, that he was the wizard and Rorek was the dragon. He told Raven that he could empathize with her nature. He gained Raven's trust and affection and manipulated her in freeing him from his imprisonment in the book first, then he taught her his full knowledge of his magic to ensure that he will be fully freed.

Raven became suspicious of him when she realized he was teaching her dark magic, but he explained that just because people feared it did not necessarily mean it was evil. It ultimately turned out he was indeed teaching her evil magic, however.

Raven succeeded in breaking the curse, but to her horror she realized what she unleashed. When the Titans were unable to take Malchior down in combat, Raven trapped Malchior in the book again and locked it away.

Some time later, Malchior was somehow freed and was recruited into the Brotherhood of Evil in his paper form, but he can turn into a dragon at will. During the final battle with the Titans, Malchior planned to burn Melvin, Timmy Tantrum, and Teether that Raven recruited in the battle, but his attack was foiled by Herald who blew his horn and sucked in the fire and then Malchior himself to another dimension.

It is unknown what happened to Malchior afterwards.

While trapped in the book, Malchior had limited powers but he could remodel the pages at will. In his humanoid paper form, he could employ his magic powers to further extent. In his true dragon form, Malchior possessed super strength, physical endurance, the power to fly with wings and to breathe fire. He also possessed great resistance to physical, energy and magical attacks. In all three forms he possessed great knowledge of dark magic ever known to anyone. 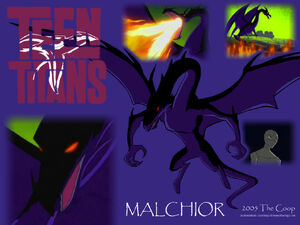