Creating shrines for his victims.
Chopping up pigs.
Listening to the music and dancing.
Raping young girls.
Quoting Robert Burns.

Get away with torture and murder of a young woman and many other people (dependent upon player's choice).

Malcolm Sturrock is a minor antagonist from 2004 stealth-action game, Hitman: Contracts. He is the main antagonist of the mission "The Meat King's Party".

Little is known about Malcolm's past, apart from the fact that he and his brother emigrated from Scotland to Romania. Some time before Agent 47 receives a task of eliminating Campbell Sturrock, Malcolm kidnaps a daughter of a rich individual, tortures and kills her, mutilating her body afterwards. It turns out that Campbell was falsely accused of girl's kidnapping, since his brother Malcolm did it, but it is very likely that Campbell knows about Malcolm's homicidal tendencies and covers him up. After acquiring girl's arm as a murder proof from Malcolm's torture room, Agent 47 can simply leave undetected or dispose of Malcolm as well.

Malcolm is a bold white male with blue eyes. He is tall, obese, but pretty muscular and wears a standard butcher outfit without pants with only his dirty underwear and socks on.

Malcolm Sturrock is a deranged serial killer, who stalks and kidnaps young girls in order to violate and torture them. After committing his most recent crime, Malcolm builds a "shrine" dedicated to his latest victim. He is seen dancing in front of it while an old phonograph is playing Frank Sinatra's song "Put Your Head On My Shoulder". While dancing, he thrusts his hips passionately indicating that he is either imagining having sex with her when she is alive and well in a fairly normal relationship or reenacting sexual abuse he inflicted upon her after kidnapping. There are several photos of the girl strewn about the shrine with the word "Bitch" written in blood and her eyes crossed out, which can possibly mean that Malcolm used her as an outlet after many failed relationships or out of hatred to women in general. While patrolling the second floor of the meat plant, he sometimes mumbles something under his nose, but upon seeing Agent 47, Malcolm swings his meat cleaver three times at him, either taunting him or trying tell him that he is not allowed there. However, during his attack Malcolm chants a few quotes from poetry of Robert Burns, which means that he read it in the past or intentionally memorized these quotes in order to impress girls on the first date so he seems like a decent and educated person. No matter if Agent 47 is armed with firearms or close range weapons, Malcolm will still attack him without any precautions. 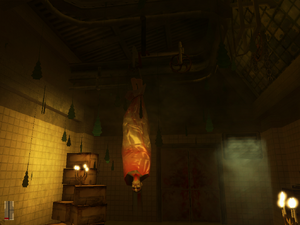 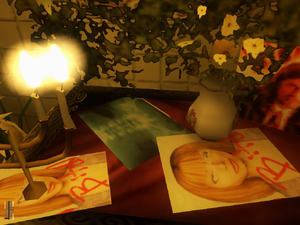 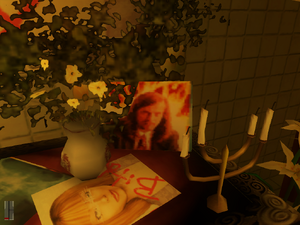 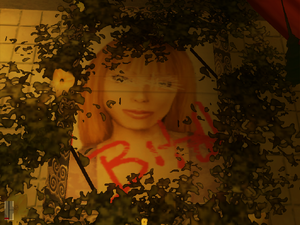 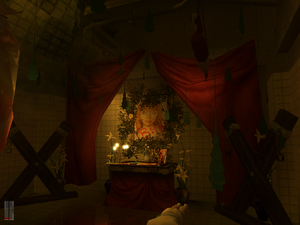 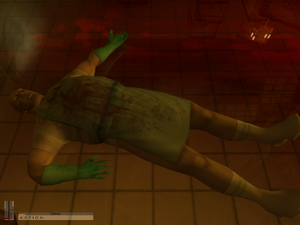 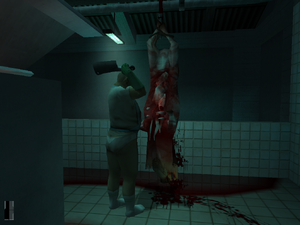