The Thick Of It

Communications Director to the Leader of the Opposition (currently)

Keep the party in power (succeeded until season 4).

Get his job back.
Remove Nicola Murray as Opposition Leader (both succeeded).
Avoid jail time (failed).

Malcolm Tucker is the one of the main protagonists/antagonists of the BBC political black comedy show The Thick of It and its film spin-off In the Loop. A supporting character in the first two series, he takes a more prominent role from the 2007 Specials onwards. Tucker serves as the spin doctor and political enforcer for the Prime Minister of Great Britain, and is known as one of the most feared political fixers in the business. His position in the British government is communications director.

He was portrayed by Peter Capaldi, who also played Cardinal Richelieu in The Musketeers.

Malcolm has silvery-blue eyes with light brown (later gray) hair and speaks with a Scottish accent. Throughout the series, he is almost always wearing a black suit, though sometimes, he wears a white fleece.

Malcolm is incredibly irritable, cantankerous, short-tempered, and vituperative, frequently exasperated when the members of DOSaC constantly make mistakes that he subsequently has to fix, as well as spewing threats and insults to anyone who has angered him. He acts as the Prime Minister's enforcer, ensuring that all cabinet ministers follow the party line.

Despite his argumentative and obnoxious nature, Malcolm is shown to be more capable of long term thinking that the other characters in the series, and while Hugh Abbot describes his schemes as borderline Machiavellian, they are more often than not aimed at a common good; otherwise friendly character, such as Ollie Reader, are shown to be more overconfident, self-serving, and egotistical by comparison. At the same time, Malcolm is implied to be a self-made man with humble origins, and always addresses anyone deemed socially inferior in a gentlemanly and empathetic manner devoid of condescension. In comparison, other characters act obnoxious and patronizing towards people of the general public.

In Season 4, during a self-deprecating rant, Malcolm explicitly states that he has no children, or any real friends for that matter. When Ollie Reeder takes over as Director of Communications in the final episode, Malcolm tells him that the job will 'f***ing kill [him]' and gives him 18 months before he is 'a washed up, weeping alcoholic, with no f***ing bladder control, sleeping on [his] brother-in-law's sofa'. Malcolm makes it very clear just how stressful his position is to Ollie, declaring that 'I take this job home, it f***ing ties me to the bed, and it f***ing f**ks me from arsehole to breakfast! Then it wakes me up in the morning with a cup full of piss slung in my face, slaps me about the chops, to make sure I'm awake enough so it can kick me in the f***ing b***ocks! This job has taken me in every hole in my f***ing body!'

The only person Malcolm ever expresses any genuine affection for is Sam, his secretary, even going so far as protect her from men clearing out his office, as well as comfort her. Sam is consequently the only person to view him in a positive light. 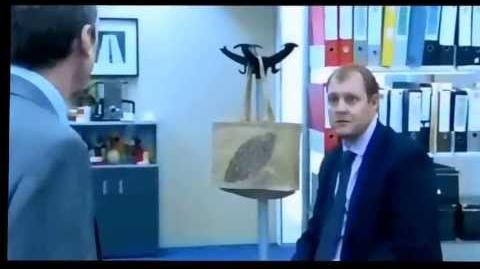 The Definitive Malcolm Tucker
Add a photo to this gallery
Retrieved from "https://villains.fandom.com/wiki/Malcolm_Tucker?oldid=3560012"
Community content is available under CC-BY-SA unless otherwise noted.