Dimwitted Minions
Maleficent's Goons are supporting antagonists in Disney's 16th full-length animated feature film Sleeping Beauty, which is based on the 1697 classic fairytale of the same name by the late Charles Perrault. They are a simple-minded race of animalistic orc or goblin-like creatures who serve as the army to the evil fairy witch Maleficent.

In the original film, they were voiced by the late Candy Candido, the late Pinto Colvig, the late Bob Amsberry, the late Mae Questel, the late Billy Bletcher, the late Dallas McKennon, and the late Jack Mercer.

The goons first appeared in Maleficent's fortress, where Maleficent has given the task to find the princess Aurora around the land, probably in the French countryside. However, they wasted 16 years of searching around the land looking for a baby, as one of the goons exclaimed that they searched all of the houses and cradles. This annoyed Maleficent so much, that she uses her magic to torture them as punishment before telling her pet raven Diablo to find Aurora himself, which he manages to accomplish. This leads Maleficent to set upon a curse on Aurora, sending her into a death-like sleep.

Despite their failure to capture Aurora, the goons managed to capture Prince Phillip in case he would investigate Aurora's fate and break the curse, much to Maleficent's delight. Impressed by this, Maleficent orders the goons to take Philip to her fortress and keep him chained up, telling them to be as gentle as they could. However, three fairies (Flora, Fauna and Mayweather) manage to free Philip from his prison and help him escape from Maleficent's castle. As such, the goons attempt to take down Philip with their weapons, but the fairies use their magic to turn their weapons into harmless objects, much to the goons' anger. The Goons are not seen again after this, so their fate is unknown, following Maleficent and Diablo's deaths, but it is possible that they have taken over the castle for themselves or they were left jobless and allowed to leave the castle to pursue their own goals.

They have a cameo appearance in the 1988 film Who Framed Roger Rabbit. They also make possible cameo appearances in Mickey's House of Villains, but they do not take part in the takeover.

They later reappeared in Kingdom Hearts: Birth by Sleep alongside their mistress Maleficent. 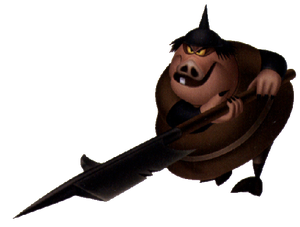 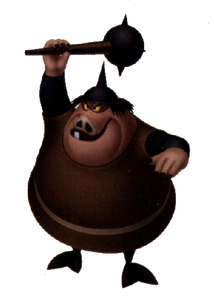 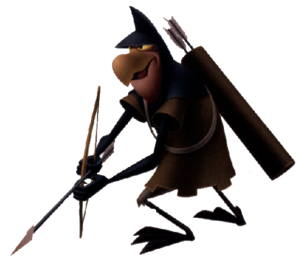