Mistress of All Evil

Pyrokinesis
Sharp teeth (in her Dragon Form)
Her magic Staff

To kill Princess Aurora with her 16-year curse (formerly)

Maleficent is the overarching antagonist of the Descendants franchise.

She is the mother of Mal who plots to use her child, as well as the other children, to steal the Fairy Godmother's wand to bend good and evil to her will, alongside the other villains.

She is considered to be the worst villain in the land, and Auradon's #1 enemy.

She was portrayed by Kristin Chenoweth, who also played Lily St. Regis in the 1999 remake of Annie, and previously voiced Gabi in Rio 2.

After her defeat in Sleeping Beauty, Maleficent was banished to the Isle of the Lost for several years, where she took over the island as ruler and her daughter Mal grew up there, where Maleficent berated her for being not strong or evil enough.

Maleficent sends her daughter and three other villain kids to Auradon Prep to claim the wand for her to free herself. She tells her daughter not to blow the operation, and Mal silently agrees, wanting her mother to be proud of her. In actuality, Maleficent doesn't love her own daughter very much, seeing as she is a terrible force of evil who doesn't understand love very well.

When Mal and the others try to steal the wand, she finds a life-sized statue figure of her mother back in her prime and starts singing to it, when suddenly her mother comes to life and sings "Evil Like Me", where she tells Mal about how good it is to be bad and how she and her mother will rule the universe together, Mal happily joining in the song.

While the villain kids are at Auradon, Maleficent and the other villain adults contact them via an old electronic screen to check up on the mission, Maleficent taking her time to gleefully insult the Fairy Godmother.

The villains tune in to the coronation ceremony, and as Ben is crowned king with Mal at his side, the Fairy Godmother loses her wand, not to Mal, but to Jane, who accidentally blasts and destroys the dome. Maleficent celebrates, victorious at last, her powers finally regained after so many years.

Summoning her scepter, she screeches with laughter and dissipates in a cloud of darkness, traveling towards Auradon. She arrives in a dramatic entrance similar to how she crashed Princess Aurora's ceremony. She orders Mal to wand her, but Mal, who wants to be redeemed, tosses the wand to the Fairy Godmother. Maleficent effortlessly renders everyone in the room save the villain kids immobile with her dark magic, snatching the wand back cheerily, removing Ben's ring from Mal's finger and placing it on the wand. Mal argues with her mom, saying that she's changed, and summons the wand to her.

Maleficent loses patience, retorting that Mal (being a villain kid) has no room for love in her life. When Mal and the others resist, she warns them that they'll all regret defying her, and transforms into her signature dragon form. The now-redeemed kids formulate a plan, and the dragon is distracted by Evie's mirror, at which she lands in front of the kids, her own daughter right in front. She has a dramatic stare down with Mal, intent on winning and showing her that the evil side is the correct path, but Mal thrice chants a spell while remaining unblinking that evil has no strength when four hearts stand as one united heart. Maleficent blinks in confusion, losing the stare down, and is magically transformed into a tiny lizard, restoring and saving everyone in Auradon.

The Fairy Godmother explains that Maleficent shrunk to the size of the love in her heart - not very much. However, the fact that there is love at all gives hope for her, meaning that, despite being the worst villain of all, she can learn to love and be redeemed like her own daughter. Mal tells them to be careful with her mother as they place a glass container over the tiny lizard to keep her safe.

She appears briefly in the sequel, still as a lizard, and is presumably still being taught how to love, although she doesn't appear to have changed physically yet. 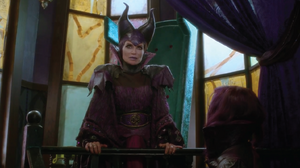 Retrieved from "https://villains.fandom.com/wiki/Maleficent_(Descendants)?oldid=3744248"
Community content is available under CC-BY-SA unless otherwise noted.