Villains Wiki
Register
Don't have an account?
Sign In
Advertisement
in: Once Upon a Time Villains, Magic, Tragic,
and 58 more

Maleficent (Once Upon a Time)

Ruler of the Forbidden Fortress

Witch
One of the Queens of Darkness

Tending to her beloved pet unicorn

She was portrayed by the guest star Kristin Bauer van Straten who also portrayed Ms. Burton in The Boy Behind the Door.

Maleficent is famous among villains for her creation of the Sleeping Curse, her writing of a highly popular spell book (used by both Cora Mills and Regina Mills), her ability to bend fire to her will, and her power to transform into a terrifying dragon. She was involved in helping Regina in sleep cursing Snow White, just as Regina was involved in helping her sleep cursing Aurora. She was the leader of the Queens of Darkness back in the Enchanted Forest, but upon her resurrection in the present day, she shared the role with Rumplestiltskin, AKA Mr. Gold.

Unlike her partners Cruella De Vil and Ursula, Maleficent works to put herself on a more equal level in the partnership with Gold and works with him rather than for him. Maleficent is regarded as the most dangerous and darkest member of the Queens of Darkness and Gold's top ally in Season 4 until she sensed betrayal and left his team, after which Isaac Heller became the main antagonist of the finale.

Maleficent is based on the Dark Fairy's character in the fairy tale Sleeping Beauty, although is heavily inspired by Disney's version of the character in her name and appearance and, most notably, being able to turn into a dragon. It was revealed by creator Adam Horowitz however that Maleficent isn't a fairy like in the fairy tale, but a sorceress.

Actress Paula Marshall was originally cast as Maleficent in the summer of 2011. However, Kristin Bauer van Straten landed the role when producers decided to go in a different direction.

Maleficent has white skin and a slender body. She has full pink lips and has blonde hair (though it is often covered), with blue-gray eyes.

In the Enchanted Forest, Maleficent is seen wearing four different dresses, with her main one being a dark black one with red imprints and a black horned headpiece which covers her hair.

In Storybrooke, her main clothes have a 1940's gangster theme, which consists of a grey blazer with a collared shirt and usually a grey skirt or trousers. This is also sometimes accompanied by a fedora hat. 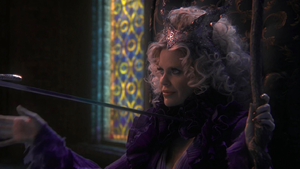 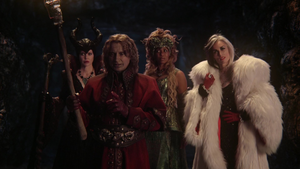 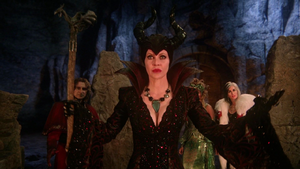 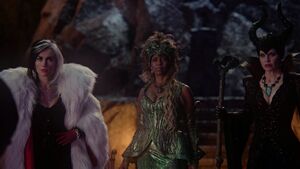 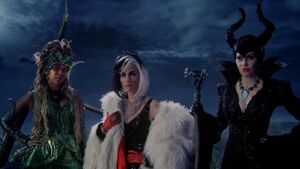 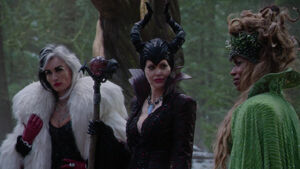 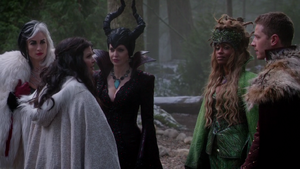 The Queens of Darkness with Snow White and Prince Charming 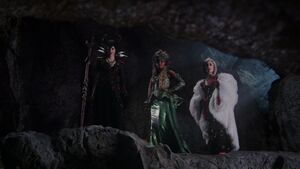 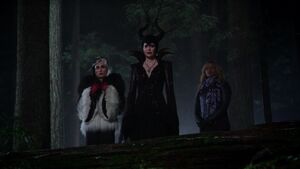 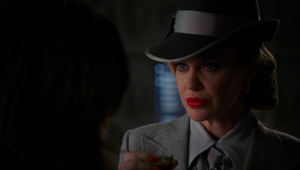 Regina poses as a double-agent for the Queens of Darkness 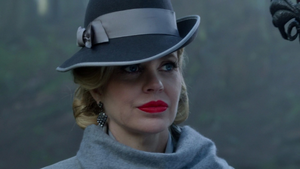 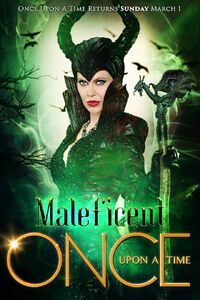 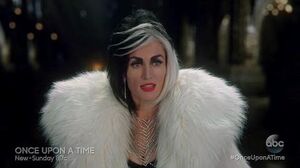 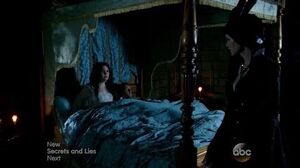 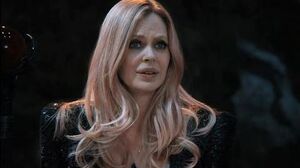 Maleficent "Mother to Mother, Have Mercy" (Once Upon A Time S4E17) 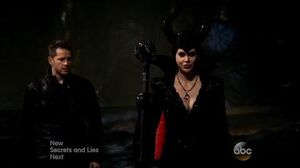