NOTE: This article is about the Skylanders villain. You may be looking for information on The Legend of Spyro version of Malefor, or his TV spinoff counterpart.

Self-crowned lord of the Undead

Sending his minions to do the work for him.

Become the King of Skylands.

Malefor, also known as the Undead Dragon King, is a character in the Skylanders franchise, self-proclaimed Dragon ruler of the Underworld of Skylands. He is the first in the rare line of magical purple dragons like Spyro. Malefor was first mentioned as a background villain who was responsible for corrupting Cynder after his minions stole her as an egg, bestowing her the powers of the Undead element.

Once Cynder was freed from his control by Spyro, Malefor later made several attempts to capture a powerful, gifted elven sorceress named Hex to learn the secrets of her powers. In response, the elven sorceress confronted the Undead Dragon King in his domain of the Underworld and successfully battled Malefor, nearly destroying him. The result of the fight left Malefor terribly wounded that he constructed steampunk armor to patch himself together and to use as a weapon against his enemies.

Years after his battle with Hex, Malefor lurked in the darkness of the Cadaverous Crypts as a shadow of his former self. He came to a distressing fairy named Calliope and struck a deal with her that he would help her find her family in exchange for doing what Malefor wanted, including stealing the powers of the Skylanders, Spyro, Cynder, and Hex, to revive himself. Once she had done the deed, Calliope retreated back to the Crypts with the three Skylanders and Wallop in hot pursuit. After Calliope's moment of hesitation, Malefor ordered Calliope to release the power she had stolen, which she did reluctantly by shattering the crystal that contained the Skylanders' powers. The powers from Spyro, Cynder, and Hex were absorbed by Malefor, reviving him back to life and fueling his armor strong enough to escape the Underworld. The Undead Dragon King easily overwhelmed the four Skylanders, knocking them unconscious with his renewed fire breath before proudly announcing his return.

Shortly after rendering his foes unconscious, Malefor had Spyro, Cynder, Hex, and Wallop imprisoned within the caves of the Crypts and left Calliope to look after them before leaving immediately to carry out his latest plan. As the Skylanders awakened and knew what kind of foe they were up against, Calliope revealed that Malefor spared Spyro, Cynder, and Hex because he wanted them to suffer as they were the ones who caused him more pain and frustration than anyone else in the Skylands. As part of his plan upon his resurrection, Malefor plotted to destroy everything the three Skylanders knew and loved, starting with the Skylanders Academy.

Malefor was already launching an attack on the Academy, intending to absorb the powers of the Skylanders and build a stronghold in place of the school. The evil dragon overwhelmed forty of the Skylanders, including the powerful Giants, that was summoned to protect the Academy and absorbed their powers with a crystal Calliope created for him to empower himself. He eventually broke through the Academy's defenses and was confronted by Master Eon's spirit just as the evil dragon drained the powers of the remaining Skylanders. Malefor only laughed at Eon's threat, proclaiming that no one could stop him, only to be challenged by Spyro, Cynder, Hex, and Wallop, who were freed from their imprisonment by Flynn and Mags.

Malefor was fully aware that Spyro, Cynder, and Hex were weakened without their powers, but had neglected to steal Wallop's powers, allowing the Skylanders to have a slight advantage. The evil dragon was whacked by Wallop's fully-charged Traptanium Hammer, an act that enraged him almost immediately and he started chasing after the Skylanders. Malefor soon fell into a trap set by Spyro with Flynn's Dread-Yacht crashing into him, damaging the vessel and slightly harming Malefor's armor. The dragon was able to withstand the blow unscathed, angrily swearing to Spyro about his repeated interference with his plans. Spyro, Cynder, Hex, and Wallop once again fought against Malefor but were easily overwhelmed. It was only from a hint by a redeemed Calliope that the Skylanders were able to find out Malefor's weak point in his armor's chest plate, allowing them to destroy his power-draining crystal. The destruction of the crystal drained Malefor much of his power and the Skylanders had theirs restored as a result.

Despite this setback, Malefor wasn't done yet, still possessing enough power to take on the Skylanders. Noticing Calliope's part in helping his enemies, the evil dragon angrily demanded to the fairy how she would ever find her family without his assistance, reminding the fairy of their deal. As Calliope declared that she would get help from her friends and the Skylanders, the other Skylanders tied the Dread-Yacht's anchor to Malefor's tail and the damaged vessel was then knocked over the edge of the island by Wallop. The Dread-Yacht was pulling Malefor down with it despite his struggles. Frantic, Malefor begged to Calliope to help him in exchange for anything she wanted, even sending her back to her family. Calliope refused, only wanting to never see Malefor again, leaving the evil dragon to be pulled over the edge and plummet to parts unknown.

As his name suggests, Malefor is completely evil and malicious, more so than the other villains in the Skylanders series. He is arrogant, treacherous, sadistic, and cruel, choosing to spare Spyro, Cynder, and Hex just so they can watch as he destroys everything they care about as revenge for the pain and frustration they caused him. His notable trait is his arrogance: he thinks highly of himself to the point of crowning himself the Undead Dragon King. Malefor wants to be king of Skylands simply because he believes he is the only fit to rule it. Anyone bearing a title higher than his own wouldn't sit well for him, prompting Malefor to not stop until he is crowned the greatest and most powerful of them all.

His methods are manipulative and sinister, as he will go as far as to trick and corrupt others into carrying out his evil ends. However he holds a cowardly side, as when Malefor was being pulled to his defeat, he pleaded for help. 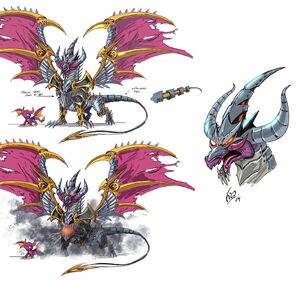 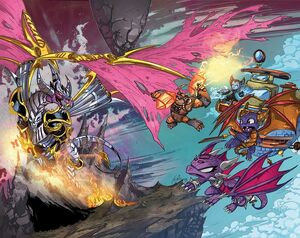 Malefor battling against Spyro, Cynder, Wallop and Hex. This image serves as the cover for the Return of the Dragon King IDW Skylanders comic story bundle. 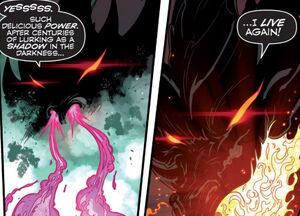 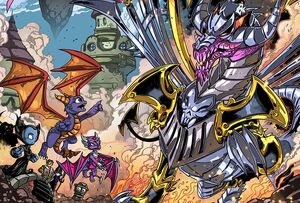 Malefor being challenged by Spyro, Cynder, and Hex. 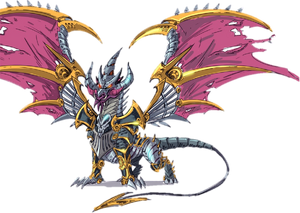