NOTE: This article is about the incarnation of Malekith from the 2013 video game adaptation of Thor: The Dark World. The mainstream version can be found here, while his MCU counterpart can be found here.

Supreme Ruler of the Dark Elves

Command over the Dark Elves

Thinking of ways to destroy the 9 realms so his world can flourish.

Perform a ritual involving the Uru weapons to plunge the entire universe into eternal darkness, so he can rule over what's left (failed)

Malekith the Accursed is the main antagonist of the 2013 video game adaptation of the Marvel film, Thor: The Dark World. He is the cruel leader of the Dark Elves, who plots to plunge the universe into eternal darkness.

He was voiced by Marc Thompson, who also voiced Megatron, Tarn, and Soundblaster in Transformers: Cyberverse, as well as Mangog in the same game.

Malekith is a Dark Elf who once plotted to destroy the universe, with only his home world, Svartalfheim, remaining. When those plans failed, he sought the Uru weapons to commit such a task through a ritual. To succeed at these plans, he sends the Mauraders to attack Nidavelir and steal the Uru weapons, which results in the deaths of several dwarves. However, Thor and Fandral prevent these plans. In response, Malekith sends his two henchmen to release a powerful monster known as Monogoth from Eitri’s prison as a distraction for the two heroes, while the Mauraders steal the Uru weapons known as the Blood Axe and the Sword of Torunn.

Heimdall informs Thor that he has sent Lady Sif to Jotunheim to retrieve the Bloodaxe. However she has been captured by the Jotuns so Thor must go there to rescue her. Thor fights through various monsters to rescue a captured Fandral, even fighting off some Mauraders who try to take his armor due to it being made of Uru. Upon arriving in Jotunheim, Thor fights Malekith’s army of Dark Elves, as well as the Frost Giants, in his quest to save her. They find the Dark Elves trying to place the Bloodaxe into an altar for their ritual and stop them. Once Thor and Lady Sif escape, Heimdall informs them that the Sword of Torunn is on Vanaheim.

Upon arriving on Vanaheim, Thor comes across his friend, Hogun, whose village has come under attack from the Dark Elves under Malekith’s orders. Once Thor stops the Dark Elves from completing the ritual and retrieves the Sword, he returns to Asgard and learns of Maliketh’s plans from Odin. Thor then sees an army of Dark Elves, whom are led by Kurse under Malekith’s orders, have come to ambush them and take the Uru weapons back. Maliketh uses his army as a distraction to put Odin under a spell of his and they depart. Due to Malekith’s influence, Odin orders Thor to hand over the third Uru weapon, Mjølnir, to him and to not use it to fight the Dark Elves with. Thor must comply, but already suspects Malekith has brainwashed Odin, and realizes he must rely on Loki for help.

Thor breaks Loki out of prison and the two go against Odin who plans to deliver Mjølnir to Malekith. While they are able to bring Odin back to his senses and get Mjølnir back, they are still too late as Odin has already delivered the Bloodaxe and the Sword of Torunn to Svartalfheim. Upon arriving there, Thor finds out that Loki had been working with Malekith all along and has fallen into his trap. An army of Dark Elves appear and Thor fights them off.

However, Loki subdues Thor and Malekith begins the ritual, revealing that he plans to destroy all 9 realms, including Asgard-leaving only Svartalfheim to flourish. Loki realizes that Maliketh had lied to him about making him King of Asgard and that he plans to kill him since he’s outlived his usefulness. Thor recovers and tells Malekith he will never receive the power of Mjølnir. Loki and Thor team up again to fight against Malekith’s forces.

As Thor is fighting the Dark Elves, Loki arrives in Asgard and convinces Odin to arrive on Svartalfheim to stop the ritual. Odin succeeds and Malekith transforms into a giant, distorted monster as a result. Malekith tries in one last attempt to kill Thor and his army, but they destroy him once and for all.

Malekith was the cruelest and most treacherous of all Dark Elves. He was so willing to let his kind flourish that he would destroy all other worlds so he would be at the top-even if it meant unleashing several monsters and destroying whole villages to achieve his goals. He was also shown to be incredibly hypocritical when he blamed Thor for "condemning" his people to death. Thor calls him out on such hypocrisy given that Malekith had done so himself, due to having them do his bidding in his insane plans. He showed no gratitude towards anyone who helped him, be that either Loki, the Frost Giants, or the Maurauders, given he planned to wipe out their worlds as well as they themselves despite their loyalty to him. 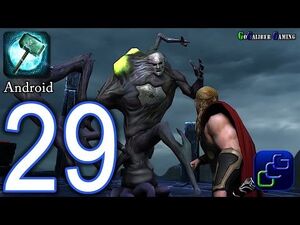