Supreme Ruler of the Dark Elves

Killing, dominating, and destroying everything that stands in his path.

Malekith the Accursed is the main antagonist of the 2013 Marvel Cinematic Universe film Thor: The Dark World and a posthumous antagonist in both its 2017 sequel Thor: Ragnarok and the 2019 film Avengers: Endgame.

He is the ruthless and cruel leader of the Dark Elves and the realm of Svartalfheim, who plots to plunge the universe back into eternal darkness.

He was portrayed by Christopher Eccleston, who also played Raymond Calitri in Gone in 60 Seconds, Henry West in 28 Days Later and Destro in G.I. Joe.

Born in Svartalfheim, Malekith became the extremely enigmatic Chieftain of the Dark Elves who expressed absolute loyalty to him and worshiped him as a god-like figure. His discovery of the Aether put him in conflict with the forces of Asgard and their king Bor. Consumed by their coveting of the Aether, Malekith launched a genocidal war against the Nine Realms. With the Convergence above him, Malekith prepared to unleash the Aether to bring eternal night. But before he could, the Asgardians, led by King Bor, successfully stole it from him, forcing him, Algrim, and what remained of their race to go into hiding.

Thousands of years later, during which Bor had died and Asgard was being ruled by his equally covetous and malevolent son Odin, the vengeful Malekith and his remaining army awakened when the Aether was absorbed into the body of a human woman named Jane Foster, signaling the beginning of the Convergence. The Aether's reactivity allowed Malekith to sense its location.

Malekith first traveled back to his home world of Svartalfheim, which had been all but destroyed during the great war between the Dark Elves and Asgardian Army, with hundreds of Dark Elf Flagships littered across the burnt wasteland. As Algrim attempted to comfort his guilt-stricken leader by reminding him of all the Dark Elves still alive due to his actions, Malekith swore to avenge his fallen brothers by reclaiming the Aether and using its immense power to destroy Asgard and the rest of the universe.

Malekith and the Dark Elves started searching for the Aether. They soon discovered that Jane Foster had been transported from Earth to Asgard in order to have the Aether removed from her body as it was slowly killing her. Malekith sent his lieutenant Algrim into the city under the guise of a prisoner, and before he left Malekith stored a Cursed Stone inside Algrim's gut to make him indestructible and allow him to destroy Asgard's defenses from the inside.

Malekith sent his attack ships to fly into Asgard and invade the city. After Algrim transformed into a Cursed and freed the inmates, including Lorelei, he managed to lower Asgard's defenses. Malekith's own ship crashed into city and his soldiers attacked the guards. While the Dark Elves held back the Asgardian Soldiers, Malekith calmly walked through the room and destroyed Odin's throne with a Black Hole Grenade.

Malekith went to the palace room where he found Queen Frigga protecting Jane Foster. When Malekith attempted to capture Foster, Frigga defended her by attacking Malekith. Being taken off guard by Frigga's fighting ability, Malekith was defeated in single combat. Algrim eventually arrived and restrained her while Malekith went to grab Foster, only to discover that she was an illusion and the true Foster was hidden in another room of the palace. Malekith called Frigga a witch and demanded to know where the Aether was. Realizing that Frigga would not talk, Malekith allowed Algrim to kill her by stabbing her through the heart. Thor, witnessing the death of his beloved mother, angrily struck Malekith's face with lightning, leaving a permanent burn on the right side of his face. Algrim carried his injured master and together they jumped on board a Dark Elf Harrow and escaped before Thor could kill them.

Malekith was taken back to the Dark Elf Flagship where his injuries were treated while his forces prepared to attack Asgard again. Algrim insisted that they must attack Asgard again while they were still weak after the last battle, however Malekith sensed that Thor and Loki had chosen to disobey Odin's orders and decided instead to move Jane Foster to Svartalfheim in order to draw Malekith out.

Malekith witnessed the Asgardian's arrival on their home world and was surprised when Loki suddenly betrayed his brother by seemingly stabbing him in the side before cutting off his hand and surrendering Foster to his forces. Loki then told Malekith that all he wanted in exchange for his partnership was a seat from where he could watch Asgard burn. Algrim recognized Loki as a fellow prisoner on Asgard who he had seen during his breakout from the dungeons and confirmed this to his superior. Malekith took Algrim's word and mocked Thor as he lay moaning in pain on the ground.

As the Dark Elf extracted the Aether from Jane, it was revealed that Loki cutting off his brother's hand was actually an illusion. Summoning his hammer, Mjølnir, Thor attempted to destroy the Aether while Loki protected Foster, only for the Aether to reconstitute itself almost instantly. Malekith explained that the Aether could not be destroyed and absorbed it, leaving his Dark Elves and Algrim to deal with his two Asgardian opponents. Malekith then made his way to Earth, where he would unleash the Aether into the Convergence and then obliterate the realms.

Arriving on Earth, Malekith and his forces witnessed portals in the sky opening up as the Convergence began. They were soon confronted once again by Thor, who had survived his battle with Algrim. With the Aether enhancing his power and abilities, Malekith battled Thor, absorbing the power of his lightning and throwing him through the air. Their fight quickly led to them being thrown through various portals left by the Convergence.

Their strength was equal, finding that neither could overpower the other as they were teleported over the Nine Realms, taking them to Svartalfheim where Thor lost Mjølnir through a portal, leaving him nearly defenseless. While on Jotunheim they were almost killed by a Jotunheim Beast. Eventually, the two were teleported away from each other and Malekith used the opportunity to begin unleashing the Aether on the Nine Realms, sucking all the light out of the Realms.

Thor returned and used a teleportation device Erik Selvig had created to send him to Svartalfheim. Malekith fell on his back, weakened by the battle, moments later, Erik Selvig used another device to teleport Malekith's Dark Elf Flagship to the Dark Elf's location, the ship continued to fall and Malekith, unable to move in time, was subsequently crushed and killed by his own ship.

Malekith is only seen on a computer panel in the film as it took place following the events of Thor: Ragnarok. As Thor explains the nature of the Aether, Malekith's face appears on a series of projections.

Despite appearing to those he rightly called enemies as a mean, vengeful, destructive, and black-hearted tyrant spitefully cited by Odin to be unprecedented in his ruthlessness, Malekith is a determined, no-holds-barred leader who did not become the lord of all Dark Elves for nothing. He even managed to come upon the legendary dark power of the Aether; however, this caused King Bor to ravage his people. He was willing to do whatever it took for his goals to be fulfilled, an example of this would be when Asgardians and Dark Elves were battling on Svartalheim, Malekith sacrificed his own troops in a desperate bid to kill his foe, only caring about losing his legacy when showing regret for their deaths. Malekith, his army, and his superweapon were trapped in stasis for centuries, but this did not soothe his hatred for Asgard; who was once a victim became obsessed with the remaking of the Nine Realms in his mighty image and sought to reclaim his property from those who had greedily robbed him of it. He even Kursed his second-in-command, although Algrim had most notably consented to do it. He also possessed a strategic mind, being able to implant a Kursed One in Asgard and then able to launch an all-out attack on the city, Malekith was able to locate where the Convergence would take place and use it to destroy the Nine Realms.

Due to the power of the Aether, Malekith possessed a superhuman amount of physical strength and was able to hold his own against Thor, being capable of absorbing the lightning fired by Mjølnir. Due to him having the power of an Infinity Stone, Malekith had the capability to destroy a world, but he was not invincible as he was crushed by a Dark Elf Flagship, which killed him.

Malekith has mastery over the Aether, and appears to be one of the most powerful beings in the Nine Realms. He is able to match Thor with the power of the Aether, otherwise slightly surpass him. Malekith possesses various superhuman attributes, some of which are common to his race, the Dark Elves.

While he was empowered by the Aether, he gained extremely powerful reality warping abilities. 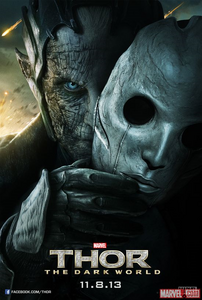 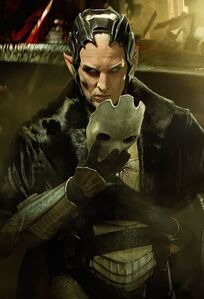 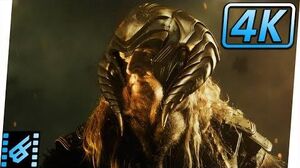 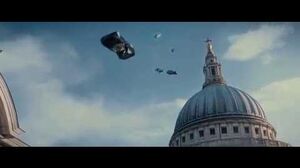 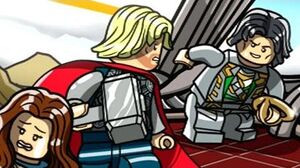 Malekith is often not well praised by fans as an antagonist due to lack of screen time and underdeveloped motivations and personality. In addition, Christopher Eccleston has said that he did not enjoy the role due to the heavy amounts of makeup, requiring 6.5 to 8 hours to apply, and that a majority of his scenes that were to flesh out his character were cut in favor of giving more screen time to Loki. He also admitted that he only accepted the role for the money and the chance to work with Alan Taylor.