Abusing her children.
Causing suffering to other living things.

Defeat the Turtles and Splinter.
Loot and Destroy Planet Earth (both failed).

Maligna is a major villain in the Teenage Mutant Ninja Turtles comics in the Archie and IDW series. She is the mother and queen of the Malignoids a hive mind insect like Aliens.

Maligna first appeared in the Teenage Mutant Ninja Turtles Adventures #12 the Lost world. She would have been the major villain in the canceled mighty mutanimals spin-off.Maligna was a rival of Krang and she and her children go out on worlds to devour them.Maligna is introduced when Krang contacts her to lead her into earth if her warriors defeat the turtles. Maligna also had a habit of eating her own children.

Maligna had sent her pods with adult Malignoids to destroy the Turtles and the other pods that contains larval which once hatchted that will devour all that stands in their way.

Maligna also captured Mondo Gecko and Raphael for her feasts but was stopped by the Turtles. The Turtles and the mutanimals were saved by a repentant Kid Terra who shot off one of Maligna's antenna the source of her telepathy, terrified of losing her power over the Malignoids, Maligna was made to promise to leave Earth forever if she wanted to keep her other antennae. However once out of earshot, Maligna swore she would get revenge on all of Earth.

She later returns again this time intend on killing everyone on earth by teaming up with Null to destroy the Turtles and their allies. Hiring cyborg assassins, Maligna used her forces as a distraction, before having the mercenaries mercilessly gun down the Mutanimals, only Candy Fine surviving as Null captured her as a slave.

The Turtles and Slash, a former enemy turned friend of the Mutanimals tracked Malignoid and Null to the former's spaceship. The turtles managed to rescue Candy, though Null escaped, while Maligna engaged them in battle. During the battle, Slash destroyed the engine of Maligna's ship, causing it to start to drift near the sun. Slash volunteered to stay behind in the ship and hold back Maligna and her forces, to ensure his friends survived and Maligna could cause no more suffering. As the turtles escaped, they watched Maligna's ship fall into the sun, Slash's sacrifice destroying Maligna once and for all.

In the IDW comics,Maligna is the queen of the Partistic race known as the Maglignoids like her archie counterpart. She first appeared in the Trial of Krang as one of Krang's allies. She and her minions were going to attack The Neutros but were attacked on the Trial. She was Temporally repelled by Donatello who came up with a plan to put the Malignoids in dissaray.She Retreated from Neutrino though she is still alive and at large. 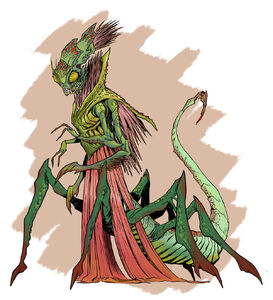 Maligna in the IDW comics.
Add a photo to this gallery

Retrieved from "https://villains.fandom.com/wiki/Maligna?oldid=3332427"
Community content is available under CC-BY-SA unless otherwise noted.