Mobile Suit Gundam Side Story: Space, To the End of A Flash

Arrogant Nemesis
Mallet Sanguine is the main antagonist of the manga Mobile Suit Gundam Side Story: Space, To the End of A Flash. He is the captain of a Zeon squadron and is the pilot of the MS-11 Act Zaku.

Mallet is extremely proud of his piloting skills, and thus he is very arrogant, believing that he could take on the Thoroughbred all by himself. As he countered the Gundams, he becomes more obsessed with destroying the Gundam G05, to the point that he is willing to ignore the fact the Principality of Zeon has already surrounded to Earth Federation.

Mallet was first seen on Granada, a Moon city controlled by Zeon, where he taunted a Zeon soldier that escaped from Earth, calling him out for abandoning his comrades. He also objected his commander's action of sending re-enforcement to Solomon and A Boa Qu, as he seen them as weaklings.

Soon, Mallet received orders to find out and destroy an Earth Federation fleet in the Granada sector in order to protect the re-enforcement squad. He soon encountered the Thoroughbred squad and fought Ford Romfellow in his RX-78-5 Gundam G05. However, as he was distracted by Ford, Luce Cassel in his RX-78-4 Gundam G04 was able to fire the meag beam launcher, thus destroying the re-enforcement squad, forcing Mallet and his squad to retreat.

Eventually, since suspicious vessels, which is the Thoroughbred squad was spotted on Von Braun, he and his squad were sent to investigate it. When Mallet spotted three cargo vessels, he instantly attacked them without investigation. However, the vessels were indeed the Thoroughbred squads' members,  Mallet then battled Ford, which both of them enjoyed. However, Ford soon remembered that his original mission is to guard the supply ships, thus he withdrew, and since the Act Zaku was unable to catch up, Mallet was left screaming in anger for Ford's retreat.

Then, Mallet together with his squads ambushed the Thoroughbred squad in a debris field, Mallet once again battled Ford, however, Ford outmaneuvered him and destroyed the MAN-03 Braw Bro, forcing Mallet's squad to retreat. Mallet then once again chased Ford, however, this was actually a trap as Luce was going to fire the Mega Beam Launcher, Mallet was caught in the beam, breaking the visor sensor of his helmet, which disfigured his face.

Soon, the Principality of Zeon surrounded the Earth Federation. After acknowledging this, he forced his engineer to remove the limiter of his Act Zaku and murdered him, after taking some drugs that enhanced his piloting ability, but at the cost of his mental health, he sortied out without his commander's permission. After killing a Gelgoog pilot that tried to stop him, he confronted Ford and his Gundam G05 again. While Mallet had the upper hand at first, Ford was eventually able to pierce the Act Zaku's cockpit with a beam saber, vaporizing and killing Mallet once and for all. With Mallet's demise, the Thoroughbred squad was able to sign the truce treaty with Zeon.

In the alternate ending of the manga where Luce survived the One Year War, when Luce fired the Mega Beam Launcher, Mallet would be caught in the beam, however, unlike the canonical ending, his Act Zaku would be destroyed, killing him. 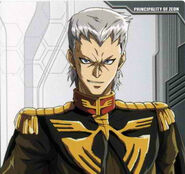 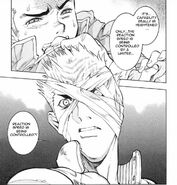 Mallet's demise at the hands of Ford.