Inflicting pain upon others.

Reclaim his power from the Aegis (succeeded).

Kill the Architect.
Use the Artifice Aion to destroy humanity (both failed).

Malos (also known as Metsu in Japanese and formerly Logos) is the final antagonist of Xenoblade Chronicles 2, and the main antagonist in the prequel expansion Xenoblade Chronicles 2: Torna ~ The Golden Country. He is a Blade second-in-command of Torna and one of the three Aegis Core Crystals created by the Architect. He’s also the archenemy of both Pyra and Mythra.

He was voiced by Yūichi Nakamura in Japanese and David Menkin in English.

Malos is a tall man with black hair and gray eyes. He wears black armor that covers the majority of his body. His hair is always spiked upwards.

Like his counterpart, Pyra/Mythra, Malos had his own Core Crystal on his chest, shaped similar to that of the Aegis. However, a chunk of it was missing, as it was destroyed in the Aegis War. However, after restoring his power, the Core Crystal became intact once more.

Malos is a cold-hearted and sadistic being. He is a ruthless and unsympathetic man who shows no sign of compassion or love for others. This is shown when he attempted to erase all of Pyra's memories, in which he viewed as weak and pathetic. He simply focuses on reclaiming the power he once lost in battle.

Despite all of this, he is extremely loyal to Jin, and will do whatever he can to make sure that both of them will accomplish their common goal. He is shown to be very arrogant and egotistical, as he has underestimated Rex and his companions in every encounter with them. He is also shown to be very short-tempered and aggressive.

According to Pyra, all of these villainous traits of Malos are the result of inheriting Amalthus' personality, after becoming his Blade, meaning that he was not born this way. The Architect describes him as an information processing unit that is driven by Amalthus' impulse.

In the past, Malos (under the name Logos) was one of the three Aegises created by the Architect, alongside Pneuma and Ontos. Years later, a young man managed to climb to the top of the World Tree where he came across two of Core Crystals. He took both of them and eventually made it back to Indoline Praetorium. With the two crystals in his possession, he grabbed Malos' first, resulting in him awakening Malos.

Malos became Amalthus' Blade, inheriting his personality and traits. As a result, he began to spread destruction across all of Alrest. His actions led to the Aegis War, where a man named Addam had resonated with the Aegis Mythra and led a battle against him. Malos was eventually defeated, with his power greatly weakened.

After the loss of Lora, Jin eventually met Malos and the two decided to wipe out humanity, forming an organization called Torna, named after the deceased Titan.

Some time later, Malos hired Rex to hunt for the other Aegis. Eventually, the group come across the Aegis, Pyra. Before Rex could awaken her, he was swiftly killed by Jin. Rex was later resurrected by Pyra, and briefly fought Jin and Malos, until he was rescued by Azurda.

Accompanied by Akhos, the two travel to Fonsa Myma in Uraya, where they meet Cole (who was once known as Minoth). Malos then kidnaps the young girl, Iona, then communicates with Pyra telepathically, telling her to meet him at the Olethro Ruins alone.

Rex and his companions eventually reach to the ruins themselves where they battle Malos and Akhos. The two were able to take them on, until Vandham proceeded to fight back by using the powers of his Blade. Malos eventually kills him, but is then forced to retreat once Pyra has transformed into Mythra.

Malos and Jin later encounter Rex and his companions at the Kingdom of Tantal, where Jin was able to solo everyone, due to his immense speed after transforming into his true self. The two were then able to take Pyra away, who decided to surrender herself, in order to save Rex's life.

The two then take her to the Gotrock Oracle Ruins at the Cliffs of Morytha, where Malos then proceeds to absorb her Core Crystal, regaining his power in the process. He later encounters Rex and his companions, and engages them in a brief battle. His powers are then nullified by Nia (who is revealed to be a Blade), then is knocked off a cliff, after having his body swell up from his body cells being altered.

Malos was able to recover quickly, however, and later encountered the group again. He and Jin then battle them, until Rex unleashed the true power of the Aegis, easily overpowering them. Before he could make a retreat, Malos reveals his plan of bringing humanity's destruction by unleashing the Artifice Aion. He then summons Ophion, only for Pyra/Mythra to summon Siren, creating a battle that destroyed the cliff everyone was standing on.

Malos was able to make his way back to the Torna headquarters, where the group were flying through the Land of Morytha to find Jin. They eventually found Jin, who was accompanied by Rex's party, but they were forced not to kill them, ordered by Jin.

After recovering Jin, the group made their way to the World Tree. Malos and Jin made their way inside, but Jin then decides to stay behind, while Malos can continue on without him. Malos eventually confronts the Architect, who gets ready to kill him. However, he is unable to so, but the Architect told him that he is already dying anyway. So Malos decides to leave him be, and take control of Artifice Aion. He is eventually confronted by Rex once more, and proceeds to battle him and his party. After being defeated, he slowly begins to fade away, with his last words being that he wished he had met Rex sooner and that his life was not so bad.

In Super Smash Bros. Ultimate, Malos appears as one of the game's many spirits, being first introduced in Pyra/Mythra's spirit board. A Legend-rank Neutral-type spirit, he makes the user's attacks stronger if they are delivered through "battering items". His spirit battle has the player fight against a Richter and three Ridleys on Gaur Plain. Only the Richter needs to be defeated to win the match.

Richter represents Malos himself, while the Ridleys represent the Artifice Gargoyles, giant automatons that Malos summons in Chapter 10 and throughout Xenoblade Chronicles 2: Torna ~ The Golden Country. 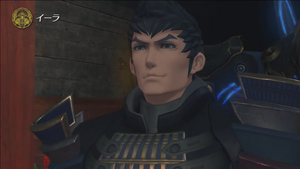 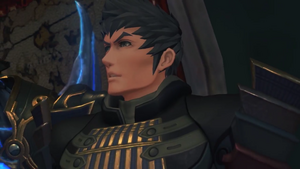 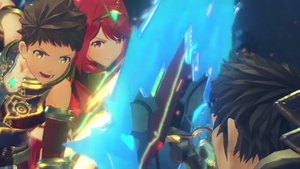 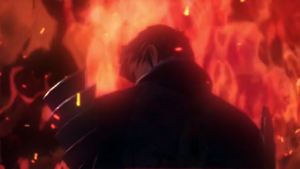 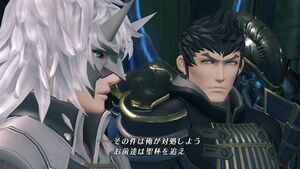 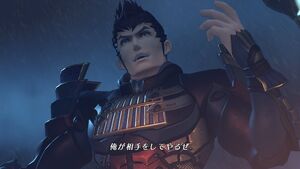 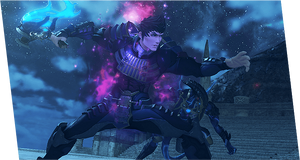 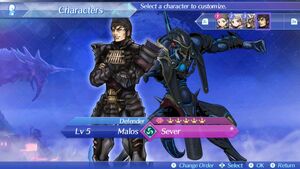 Malos and his Blade, Sever. 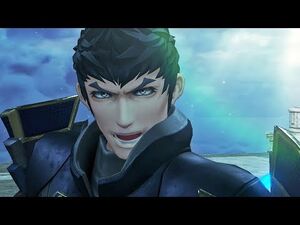 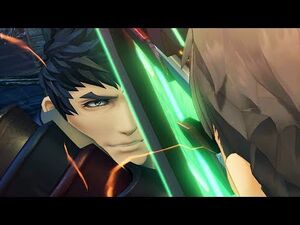