Villains Wiki
Register
Don't have an account?
Sign In
Advertisement
in: Mature, Death Gods, Collector of Souls,
and 56 more

Control over the powers of Death

End the Eternal Conflict by eradicating humanity with the Black Soulstone.

Malthael is one of the three main antagonists of the video game Diablo III: Reaper of Souls and a supporting character in an animated short film Diablo III: Wrath.

Malthael is the former leader of the Angiris Council. Once the Archangel of Wisdom, he has since become the leader of the Reapers and the Angel of Death.

He is voiced by Paul Nakauchi.

Malthael disappeared after the destruction of the Worldstone. Just prior to this, he had apparently taken a greater interest in Humanity. His departure broke the unity of the Angiris Council. Some speculated that he haunted the Halls of Pandemonium, seeking answers to the unknowable mysteries of life and death. Regardless, after Diablo's defeat in his siege of the High Heavens, a now mortal Tyrael took Malthael's place as the Aspect of Wisdom.

In truth, Malthael had seen these events. He had seen the actions of Zoltun Kulle, a Human who had embraced evil. He had beheld the latent power of the Nephalem hero. He had seen that hero defeat the Prime Evil, an act that in all his years of war in the Eternal Conflict, he had never been able to match. Faced with such power, and beholding humanity as an abomination, Malthael resolved to become the embodiment of Death. With the Lords of Hell defeated, he reasoned that Humanity was the most powerful "Demonic" force left, as per their ancient Nephalem heritage. With humanity's eradication, Heaven would stand alone, victorious in the Great Conflict. He established the Pandemonium Fortress as his base of operations. Imperius' lieutenant, Balzael, fell in league with Malthael. He also came to be joined by Urzael, who shared Malthael's views on Humanity. The Angelic maidens that Urzael had brought with him also pledged themselves to Malthael's cause.

Not long after Tyrael took on his former aspect, Malthael re-emerged, now embodying the aspect of death. He confronted his erstwhile brother and a group of Horadrim, who were in the process of containing the Black Soulstone. Malthael effortlessly slew the Horadrim and devoured their Souls in the process. While he was able to defend himself against Malthael's initial onslaught, Tyrael could not harm Malthael and was also incapacitated as his sword senses a noble intent within him. Seeing that Tyrael's soul was free of Demonic taint (unlike those of Humans), he did not see Tyrael as his enemy and ultimately decided to spare his life. After casting Tyrael aside, Malthael then approached the stone with intent on bending its powers to his will, and bringing an end to the Great Conflict once and for all. Tyrael (powerless to stop Malthael), declared that the nephalem would stop him. Malthael paused his approach and turned to face his mortal brother; responding that no one could stop death, before shattering the restraints and claiming the Soulstone for himself.

Afterwards, Malthael led his Reapers against Westmarch. By the time the Nephalem re-emerged to confront him, his plan to eradicate Humanity were near completion. Both Tyrael and the Nephalem were baffled as to why Malthael had forcefully taken the Black Soulstone. As the Nephalem fought to save what was left of Westmarch, Tyrael deciphered a sliver of the Black Soulstone that had been broken off and left behind. Eventually, the Nephalem tracked Malthael's location to the Pandemonium Fortress while Tyrael finished deciphering the Soulstone sliver. Much to the horror of his foes, Malthael was fundamentally altering the Black Soulstone to consume and contain all Demonic essence in Sanctuary. This meant that Humanity faced annihilation as their Demonic heritage would be torn from their Souls by the stone and their bodies ripped apart. Malthael continued his work from the heart of the Pandemonium Fortress, continually feeding off the increasing Souls of the dead and growing more powerful with each passing moment.

Battle against Nephalem and Defeat

As the Nephalem fought their way through the Battlefields of Eternity and gained entrance to the Pandemonium Fortress, Malthael taunted the hero, claiming the eradiction of Humanity had already begun. The Nephalem, now empowered and wielding the forces of Death itself, confronted Malthael at the heart of the fortress. Malthael proved to be an incredibly powerful adversary, displaying masterful prowess with his weapons as well as bombarding the Nephalem with waves of undeath. To bring the battle to an end, Malthael summoned the Black Soulstone into the fortress and shattered it, consuming the essence of Diablo. While this granted Malthael a massive boost in power, he was still ultimately defeated by the Nephalem. Malthael's defeat was shown to be a painful, agonizing one; coupled by a blinding explosion of energy that destroyed the roof of the fortress. As he fell to the floor below, the Souls of all he had consumed erupted from his body causing it to disintegrate until all that was left of him was a black image of Malthael's form on the floor. But this victory came at a cost as Diablo was set free following Malthael's death, allowing him to once again plot his return. 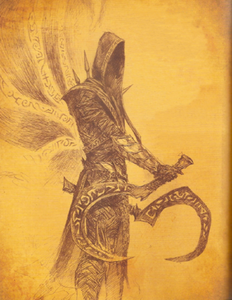 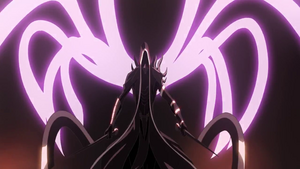 Malthael as he appears in Diablo III: Wrath 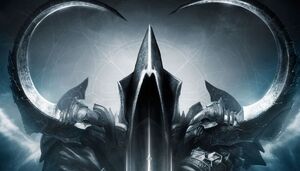 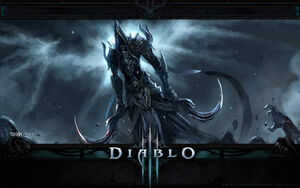 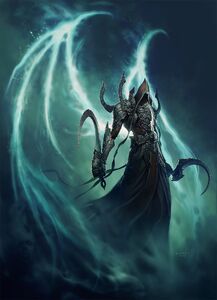 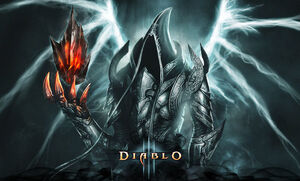 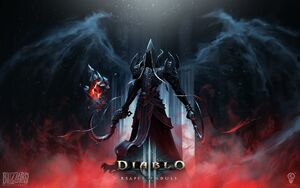 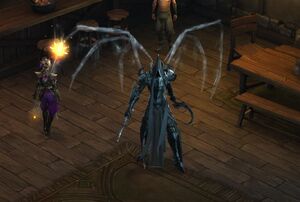 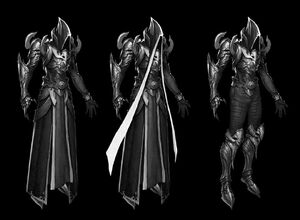 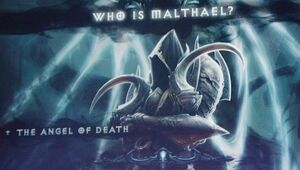 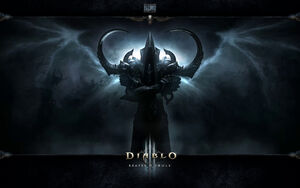 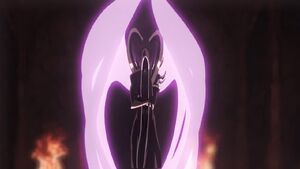