The Sixteenth Colossus, nicknamed Malus, is a major antagonist from the video game Shadow of the Colossus. It is the sixteenth and final boss encountered in the game and a vessel for the essence of Dormin.

Malus and the other fifteen Colossi were created by Lord Emon to contain the fragmented essence of the defeated evil Dormin. He set them all to wander the Forbidden Lands, destroying anyone who comes their way, so that Dormin could never be resurrected.

On his journey to face Malus, Wander must use the Ancient Sword's light to open a sealed door leading to the southernmost tip of the Forbidden Lands. As Wander is riding Argo, the bride below them begins to collapse. Knowing she cannot make it, Agro bucks Wander to safety, then proceeds to fall into the river below. Wander mourns, then looks up to see his destination, where storm clouds gather and the winds pick up.

Wander climbs up the cliffside to a great mesa where Malus, the sixteenth and final colossus, lies waiting. Although Malus is immobile, anchored to the ground like a building, it fires powerful energy projectiles from its hands at Wander. Wander must duck behind walls and down in tunnels to avoid being hit, all while using timed opportunities and the tunnels to gradually get closer to the colossus. Soon Wander will come across a cliffside ledge that he must climb along, then dodge as Malus fires a shot to knock him off the edge. Eventually, Wander will end up underneath Malus, between the colossus' legs. Wander must then begin the long and grueling climb up Malus' armor to its back, where a weak point is found. Stabbing it will cause Malus to reach back and cup the wound, allowing Wander to jump onto the palm of its hand. When Malus feels Wander grab on, it will pull its hand away and begin angrily staring at Wander while attempting to shake him off. Wander must get to the back of the hand, then run up the arm and stab it. Malus will reach with its other hand to cup the wound, and Wander must jump to the other arm. Once there, he must shoot an arrow into Malus' shoulder. Malus will reach over again, allowing Wander to get to Malus' neck. Wander then must climb to Malus' head and stab its sigil, though Malus is flailing and shaking the entire time. After the sigil is stabbed enough, Malus will fall limp and die, releasing the fragmented essence of Dormin contained within its body.

This fragmental part of Dormin will bring Wander back to the Shrine of Worship, where it combines with the other fifteen parts to form Dormin, who will possess Wander and later be banished by Lord Emon.

Malus' corpse can be seen as the credits roll. 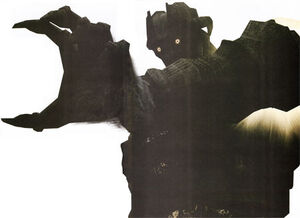 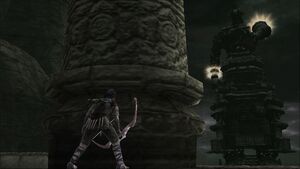 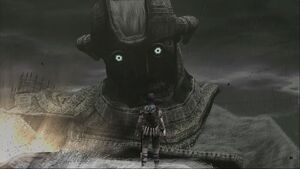 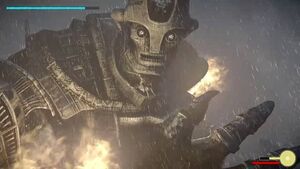 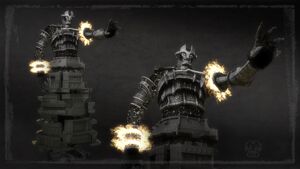 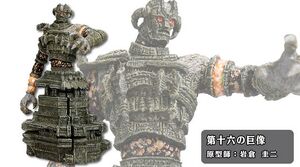 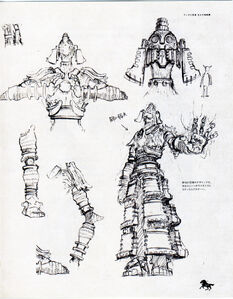 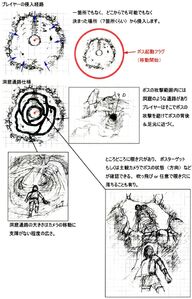 Concept art of the battle, which originally has Malus in the center of the arena as opposed to the far end. 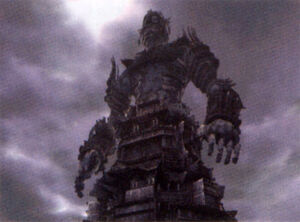 Early development model of Malus.
Add a photo to this gallery 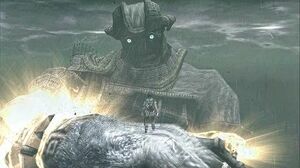 Retrieved from "https://villains.fandom.com/wiki/Malus?oldid=3768934"
Community content is available under CC-BY-SA unless otherwise noted.