Absorb the power of the Omnitrix (formerly; failed)

Destroy Galvan B and wipe out the Galvanic Mechamorphs (succeeded; temporarily)Destroy Benjamin Kirby Tennyson and Galvan First Thinker Azmuth.
Take over and remake Galvan Mark II in his image and become a living heavily armed planet.
Take over the universe (all failed).

He was a psychotic, deranged and mutated Galvanic Mechamorph who sought the destruction of his "father" Azmuth, and to absorb the power of his greatest creation, the Omnitrix, which had come to be wielded by Benjamin Kirby Tennyson. Six years later, he formed the Faction with Dr. Psychobos, Khyber the Huntsman and Zed with the hopes of killing Azmuth and Ben Tennyson. He is a personal archenemy of Ben's due to destroying his favourite alien transformation, Feedback, when he was 11.

He was voiced by Corey Burton who also voiced Braniac, Count Dooku in Star Wars: The Clone Wars, and Megatron in Transformers: Animated.

During the creation of Galvan B and the Galvanic Mechamorphs (the latter being used for the Omnitrix transformation Upgrade), the "birth" of one Galvanic Mechamorph - the future Malware - was rendered incomplete when Azmuth shut down the Helix device generating the material from which the other Mechamorphs had literally arisen. Created as a razor-bladed and skeletal yellow mutant due to his changed "life code", he instead gained the power of advancing himself by absorbing and corroding any machinery under his touch as opposed to the ability of other Galvanic Mechamorphs to advance technology by merging with it.

Five years prior to Omniverse

With Azmuth promising to repair his condition with an upgrade to make him like the rest of his kind and a long time having already passed, he had become psychotic and impatient. He crashed on Galvan Prime and started heading for Azmuth's headquarters after defeating the Galvan Defense Forces and Ben Tennyson as the Conductoid Feedback and the Tetramand Fourarms. Angered by Azmuth's "lies", he soon turned his attention to abducting Albedo to activate the secondary Helix Azmuth had in his lab; once on Galvan B, he defeated all of the Galvanic Mechamorphs present and put Albedo to work completing and upgrading the Helix, though he threatened the arrogant Galvan's life after some claims about the comparison of his intellect to Malware's. Despite Ben putting up a good fight as the Pyronite Heatblast, Ben's grandfather Maxwell Tennyson had to intervene to stop Malware from killing Ben. After absorbing the new Helix's power, he became a new red version of his body and began to consider himself superior over the rest of his race. His plan to take the Omnitrix failed and he was defeated by Ben, this time as the Petrosapien Diamondhead; he later freed himself and was approached by a cybernetically-enhanced mutant Cerebrocrustacean (the template for Omnitrix transformation Brainstorm) named Dr. Psychobos from the planet Encephalonus IV. Offering him a superior Omnitrix if he could get the Omnitrix itself, he agreed to this proposal and sought out his enemy, now known by the superhero named "Ben 10".

Unable to retrieve the Omnitrix, he remembered that he scanned a crude and corrupted blueprint of the original Omnitrix when his hand touched the device during his confrontation with Ben on Galvan Prime. Returning to Encephalonus IV and entering the lair of Dr. Psychobos, they uploaded the blueprints and built their own version of Azmuth's creation. Discovering that most of the Omnitrix's transformations all had natural predators, they decided to go with collecting the predators' DNA and dubbed their version of the Omnitrix the "Nemetrix". Malware was informed by the doctor that he also hired a hunter to retrieve the DNA samples and Ben himself.

Rise of The Faction

Malware and Khyber attacked a Plumber base located at Mount Rushmore where the former was temporarily able to get Ben on the ropes before his Grandpa Max used a molecule-destroying Tachyon Cannon to separate his body parts despite it actually having no permanent effect on him, with Malware once again mutating even further into another superior form after absorbing the weapon and distracting the Tennyson family long enough to give Khyber a chance to steal a Psycholeopterran DNA sample from the installation, though he was still beaten back once again. After this successful plan, Malware, Dr. Psychobos and Khyber formed the Faction to end their enemies' existences. As Khyber continued collecting predator DNA, Malware let the doctor test his Nemetrix on a live subject: the ex-Plumber Phil Billings, although after he wound up as a hybrid of one of the Nemetrix's predator aliens they learned the copy transformation device needed a non-sentient host; they went along with using Khyber's Anubian Baskuur-like pet and hunting dog Zed as Ben's counterpart. Malware located Azmuth on Earth and destroyed Feedback by splitting the transformation apart from its user and corroding the alien's lifeless shell and empty husk into dust. Unable to do anything but watch in anguish and despair, Ben angrily overloaded him with the power of the energized Omnitrix by pushing it into his body in retaliation, the resulting power discharge, making Malware's very being explode into green goo.

Although Malware ended up as an immobile puddle of nanotechnological substances, the Omnitrix created a special failsafe which prevented Ben from ever using it to rescan the DNA of another member of Feedback's species.

Malware came out of hiding, having survived his seeming destruction and planned his assault on the new Galvan homeworld of Galvan Mark II, though he needed special security access codes to get past the planetary defenses. He, Khyber and Zed located Ben and his new partner Rook Blonko at a festival for Bellwood's history. While Khyber distracted Rook and Zed distracted Ben, Malware stole the codes he needed from Rook's vehicle since the rookie Plumber was a member of the Plumber Special Forces, even claiming he was not surprised by Ben's shock and arrogance concerning his demise. After escaping from Ben and flying to Galvan Mark II, the Faction entered the Galvan Museum and collected the fossilized DNA of Omnivoracious, a Galvan's natural predator. His plan was to breach and destroy Galvan B while the others distracted Azmuth, Rook and Ben by pitting Zed against Ben and Azmuth in order to lead them off his scent. He flew to Galvan B and eliminated all of the Galvanic Mechamorphs, entering the core and absorbing the Helix's energy. Just as Ben, Rook and Azmuth realized his plan after a few hints from Psychobos, he destroyed Galvan B and headed for Galvan Mark II. He had fused himself to the shattered pieces of Galvan B and crashed into Galvan Mark II, most of his genetic codes heading the to planet's core to fuse himself with the planet. Once he had fused with the planet, he would call it "Planet Malware" and conquer the universe. Defeating Ben's transformations the Vauxasaurian Humungousaur and the To'kutsar Way Big, he became a Godzilla-like creature as he grew 600 feet tall in size, absorbed Ben into his body and trapped him. Unfortunately, Ben escaped as Feedback and enraged Malware due to the Conductoid's return. Despite his best efforts and gaining the upper hand at first, he ended up losing to Feedback and the re-energized Galvanic Mechamorphs with Azmuth's help of using the Helix to re-energize them. Reverting back to his normal form, becoming more enraged and rushed in to kill Ben and Azmuth. Realizing too late that Feedback had hooked his antennas into the Helix, Malware tried to blast him. Feedback blasted him as well and drained Malware's energy, turning the monstrosity into a stone-like statue only to separate Malware into copies of his second and final forms with both stuck as near-dead statues.

Following his apparent death, Malware's remains were put in the Galvan Museum.

Vilgax and Albedo stole Malware's remains from the Galvan Museum's Hall of Predators with Albedo turning Malware's remains into a set of Mechamorph Armor. The newly created "Malgax" used it to battle Ben and try to once again obtain the Omnitrix from him. This plan failed and Vilgax was mortally wounded while Malware's remains vanished in a warp core meltdown, Causing Vilgax's ship to explode, Ben and others managed to escape. While Vilgax was floating in space in his petrified state, Malware's remains started to ooze out of Vilgax's stone body, It is unknown if this means that Malware is alive once more.

Malware was an angry, psychotic, destructive, obsessive and hate-fueled being who always felt that his creator and father Azmuth had seen him as nothing more than a failed experiment who would never impress him; Malware was obsessed with taking Azmuth's most precious creation the Omnitrix and obliterating the other Galvanic Mechamorphs. Malware was vain, conceited, manipulative and pompous as he deeply hated the rest of his kind for always being Azmuth's "perfect creations" and saw them as being flawed and inferior instead when compared to him. Malware was also very hateful, problematic, argumentative and resentful towards Azmuth, although he still considered the Galvan First Thinker to be a sort-of father figure to him.

Malware was willing to work with Dr. Psychobos to get revenge against Azmuth though he got annoyed by the Cerebrocrustacean's opinions and excuses occasionally. He also had an intense dislike of Khyber because the bounty hunter was interested in hunting his other enemy Ben for a trophy. He was also very mean-spirited and highly sadistic whenever torturing his victims, most prominently seen when he destroyed Feedback in front of Ben.

Malware didn't find Ben to be a threat even though Ben defeated him many times in the past. He believed Ben's true reputation as a hero to be exaggerated though one time he called Ben "the bane of [his] very existence" and eventually developed a quasi-respectful hatred of him. It was evident from Malware's tendencies to dismiss and cover up his defeats and unforeseen turns of events in his enemies' favor coupled with constant disdain about them and repeated assurances they would be of no hindrance to him in the long run that he suffered from a superiority complex.

Malware was a Galvanic Mechamorph (the base donor species for Omnitrix alien Upgrade) but the unique circumstances of his painful creation rendered him unable to use his capabilities of absorbing technology properly, as his creator-by-default Azmuth described "[his] condition [as] exceedingly complex" and that "[he] didn't just mimic tech, [he] became it."

When Max used the Tachyon Cannon on him, the corrupted Galvanic Mechamorph reformed himself with ease due to the weapon's limitations of only being able to cause any real harm by matching the exact general frequency of the target organism's biological rhythms and cellular composition; both of these were too mismatched in Malware's own body to destroy him. 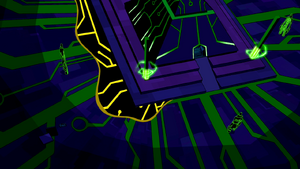 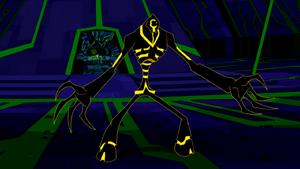 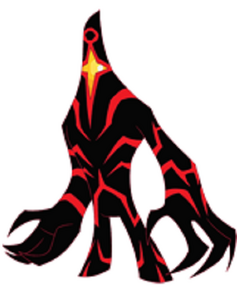 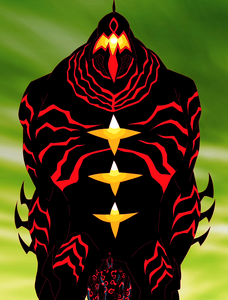 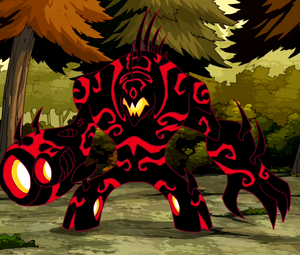 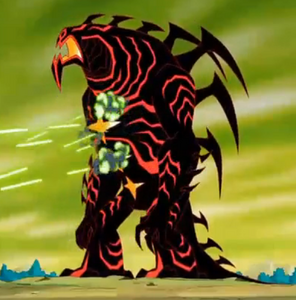 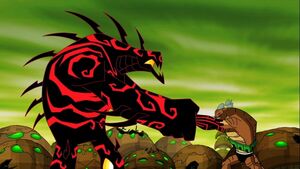 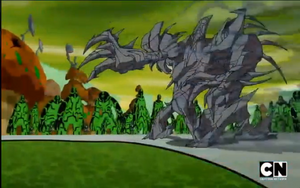 The end of Malware.