Prophet of the Void

Accelerate the world towards oblivion.

Malzahar, also known as the Prophet of the Void, is a villainous playable character in the multiplayer online battle arena game League of Legends.

Once a nihilistic Shuriman fortune teller, Malzahar found new purpose after receiving a vision from the Void Empress Bel'Veth. Now, Malzahar heralds his Empress's arrival as salvation, as her will shall bring about the destruction of all things.

The 52nd champion to be added to the game, Malzahar was released on June 1, 2010. He is is most commonly played in the mid-lane.

He is voiced by Vic Mignogna, who also voiced both versions of Broly and Rohan Kishibe.

Born in Amakra, Malzahar was orphaned at a young age from sickness striking his parents, leaving him to fend for himself. Taking the role of the a fortune teller for money and food, his accurate predictions caused Malzahar to gain great fame in his fortunes. However, there was only one future he couldn't foretell, his own. Noting the issues and aggressive behavior between the populace, a saddened Malzahar turned his back on the city and left for elsewhere. Roaming Shurima, he noted of people's evil and corruption as it plagued his mind. Eventually arriving at the ruins of Icathia during his travels, Malzahar gazed into it's abyss, and the Void answered. Malzahar was whispered to by Bel'Veth, the Void Empress, who granted him a vision promising the destruction of Runeterra. Delighted by this dark future, Malzahar devoted himself completely to the Empress's will, his mind corrupted by the touch of a higher power.

Now more than a mere man, Malzahar left Icathia with the desire to accelerate the world's path to its destruction. Returning to society people praising his "salvation", he showed his powers to rip the world around him apart around him and summon the otherworldly Voidlings, gathering his followers. Even since, rumors had been told of merchants killing themselves for their "prophet", earthquakes opening up large faults across Shurima, and settlers said to experience horrifying visions. Now with the followers of the sinister shepherd and even villagers not in the cult sacrificing their cattle to satisfy the Void, Malzahar grows ever closer to bring about the apocalypse of Runeterra.

In game, Malzahar is a battlemage type character, with his passive ability known as Void Shift, granting him the ability to ignore crowd control and having him take far less damage if not dealt minion damage or locked into crowd control. Malzahar can also summon damaging portals that silence foes with Call of the Void, summon Voidlings with Void Swarm, deliver a damaging over time affect that transfers to another foe if the host dies with Malefic Visions, and grasp a foe and channel dark energy before unleashing a blast of darkness with Nether Grasp.

Malzahar is depicted to be an incredibly delusional, mad zealot who believes that the end of the universe will be humanity's salvation. This stems from the fact that as a regular Shuriman, Malzahar's foresight led him to find zero satisfaction out of life, which in turn led him into a nihilistic depression. Despite this, Malzahar seems to be very devoted to the Void Empress, which suggests that his complete and willing corruption under the Void has left his mind completely taken over. As a result, it can be assumed that Malzahar is simply insane. 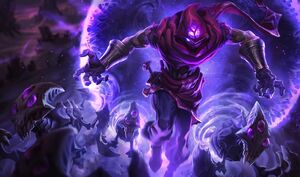 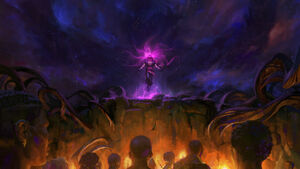 Malzahar in "Feast of the Prophet". 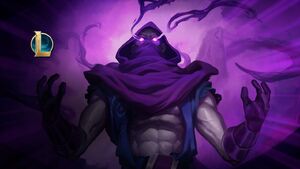 Malzahar receiving a vision from Bel'Veth. 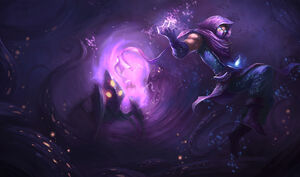 An older version of Malzahar's artwork. 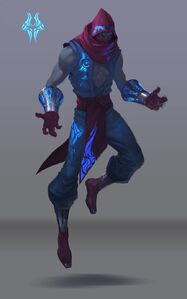 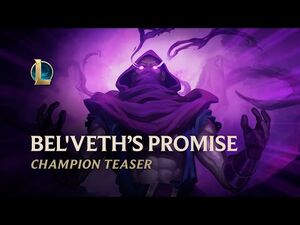