Hunting and caring for Victoria and Lily.

Care for Victoria and Lily.

Kill Victoria and Lily so they may join her in undeath.
Kill anyone who gets between her and her children.

Tragic Ghost
Edith Brennan, also known as "Mama", is a malevolent female ghost with supernatural powers and the titular main antagonist of the 2013 horror film of the same name.

She was portrayed by Javier Botet, who also portrayed The Crooked Man in The Conjuring 2, Tristana Medeiros in the REC film series, the Leper, one of the many forms of IT, in the 2017 adaption of IT, KeyFace in Insidious: The Last Key, and the Slender Man in the 2018 film adaptation of the same name.

Edith Brennan was a former patient at St. Gertrude's Asylum in the 1800s. Her appearance and simple actions imply she had Down syndrome, though this is never officially stated. She breaks out of the asylum and stabs a nun who had taken Mama's baby (also named Lily) into her care then steals the baby back. Chased by the authorities, she ends up at the edge of a cliff overlooking a lake; seeing no other path, she jumps and hits a tree branch on the way down. While an unconscious Mama fell into the lake and drowned, the baby (killed by the impact) was stuck to the tree trunk and was recovered by the pursuers.

Mama becomes a ghost, twisted by the sad emotions of not knowing where her child is (she is unaware of why the baby was not in the lake with her). This causes her to take a form of physically being twisted, with body parts askew and many joints bending the wrong way. She searched the woods for centuries trying to find her baby, until she stumbled upon Victoria and Lily about to be killed in the cabin by their deranged father, to which she broke their father's neck and began taking care of the children as substitutes for her deceased baby.

Mama's presence is generally signaled by jet-black moths and electrical problems. She plays with the children but hides from sight of anyone else; Victoria always takes off her glasses when she looks at Mama and tells Dr. Dreyfuss she won't come where she can be seen, as Dr. Dreyfuss originally believed "Mama" to be an alter-ego of Victoria.

Early in the movie, Lucas is pushed down the stairs by Mama and ends up in a coma. This forces Annabel, who feels very uncomfortable with the children, to take care of them. Over time, Victoria becomes more like a normal child, but Lily retains her feral nature; this is attributed to the fact that Victoria was older and thus had socially developed before their abandonment in the woods.

Over time, Annabel becomes attached to the children, and later, Victoria begins to prefer her over Mama, but Lily still remains completely loyal to Mama. Annabel becomes aware there is something wrong and that Mama may indeed be real. Victoria worries for her safety, saying Mama gets very jealous. Dr. Dreyfuss begins to believe the stories of Mama, first because Victoria is able to tell stories with information she shouldn't be able to know, and later because he actually sees Mama. In the course of the investigation, he obtains custody of the corpse of Mama's baby. Dr. Dreyfuss comes to believe that Mama is located in the cabin in the woods and goes to investigate one night but is killed by Mama there.

The girls' maternal great-aunt Jean Podolski visits one day, but believes Annabel is abusing the children (due to bruises Lily has from her animalistic tendencies) and begins to spy on the house for proof. Lucas has a dream induced by his dead brother while in a coma, asking him to save his children and pointing him to a location in the woods.

Annabel visits Dr. Dreyfuss's office after another supernatural night at the house but finds out he is missing; she steals his objects related to the case. At this point, she learns of the aspects of the case which the doctor had found out about and finds the baby's corpse, as well as Mama's past life. At the same time, Mama becomes furious and attacks the children and Annabel; Victoria tries hard to defend Annabel and pleads for Mama to stop, but Lily is still clearly loyal to Mama. Annabel is knocked out, but at the last moment Jean breaks into the house and has her body possessed by Mama. Mama uses this body to take the children to the cabin. Annabel wakes up, grabs the baby's corpse, and drives to the lake, finding Lucas along the way, who has left the hospital and gone to the site his brother told him about in his coma dream.

They arrive at the cabin, finding Jean dead on the floor but neither Lily nor Victoria. Annabel sees the cliff that Mama had originally jumped from; remembering the warning that ghosts are twisted souls doomed to repeat their mistakes, she realizes Mama's intentions to re-enact her fall and jump off the cliff with the children. Lucas and Annabel arrive in time to stop the children from jumping, but Mama attacks them. The assault is stopped when Annabel offers Mama a bundle, containing her baby's corpse, and Mama begins crying, preparing to jump off the cliff with it, her twisted appearance reverting to her beautiful human one.

However, as they are leaving, Lily shouts to Mama and she regains her twisted appearance and attacks again, knocking out Lucas. She grabs the kids and walks to the edge of the cliff. Annabel tries desperately to stop Mama, eventually beaten to the point that she can only hold onto Victoria. Once at the edge of the cliff, Victoria tries to convince Lily not to go, and Lilly cries that Lily, Victoria, and Mama should all be together. Mama jumps off the cliff with just Lily, and upon hitting the branch, Mama and Lily turn into a shower of butterflies. The movie ends with Victoria realizing that one of the butterflies watching over her is in fact Lily, perhaps referencing a ghostly regret of Victoria not going with her. Also, that butterfly, unlike Mama's (which are moths and are black) is blue.

Mama is seen as a loving parent and shows good knowledge in playing and taking care of Victoria and Lily. However, in times when Annabel interferes, Mama can turn angry, insatiable and extremely jealous, often trying to protect her adoptive children and violently lash out, pertaining to her malevolent side.

Mama, once a beautiful and thin woman with long hair, became a monstrous and skeletal figure with greyish skin, frail and disjointed limbs and long sharp fingers. She also has a pair of round, glowing blue eyes and dirty hair that flows in an ethereal and eerie manner. She wears a simple dark dress which became more tattered and equally floated like her hair.

As a ghost, Mama showed to be capable of a vast amount of wraith-like powers, most infamously her ability to fly. She is seen using possession once and can hide in the shadows, as well as being able to transform through shape and size. 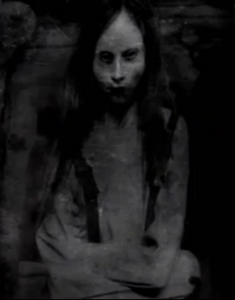 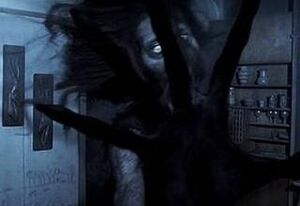 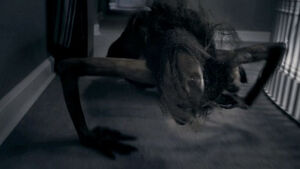 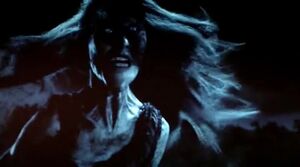 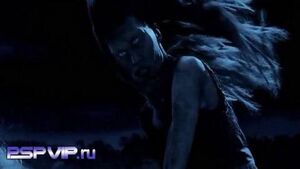 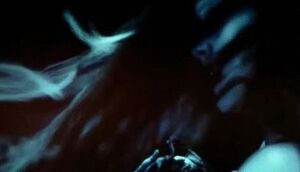 Mama revealing the transformation of her former self, Edith Brennan. 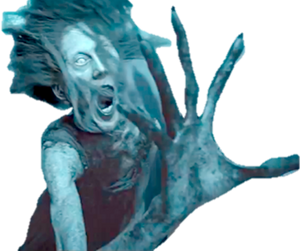