Continue to live in bodies of newcomers.

Mama Cecile and Papa Justify are the spirits of 1900s renowned Hoodoo practitioners and the main antagonists of the 2005 horror film The Skeleton Key. They haunt a dilapidated plantation home in Terrebonne Parish, Louisiana, and remain as the owners and occupants of the house through possession of the families that have moved in.

Papa Justify was a tall man with a butler's tailored suit and often wore a choker necklace composed of bones and a gold ruby-encrusted ring with three snakes. Mama Cecile was a woman with short hair, a maid's dress with a matching bonnet and wore beads. Mama Cecile was fond of smoking cigarettes. The married couple appear to be devoted to their sole goal; to continue to occupy the plantation home by swapping bodies of the new families that move in. The families that move on often appear to see them in the mirrors, which explains why Violet does not allow mirrors in the home. Both appear to cause chaos in the home, terrorizing the occupants and driving them insane before possessing them and switching bodies.

Sometime in the 1900s, Mama Cecile and Papa Justify were house servants to a wealthy plantation owner's family. During a party, the guests noticed the children had disappeared, but discover the servants in the attic performing Hoodoo rituals with the children. As a result, Cecile and Justify were lynched and burned.

In the present day, Caroline Ellis is a New Orleans Hospice Aide who interviews for a position as a private caregiver at an isolated plantation house deep in the bayous of southern Louisiana. The lady of the house, Violet Devereaux, looks after her husband Benjamin Devereaux, who has had a stroke. With some prompting from the family's estate lawyer, Luke Marshall, Caroline accepts the position.

Caroline discovers that the mansion has a dark past. Finding her way into a secret room in the attic (where Ben had his stroke) using a skeleton key that Violet gave her, she discovers dolls, a book of spells, potion jars, and various other magical paraphernalia. Violet reveals to Caroline the story of Cecile and Justify; Violet also tells Caroline that they do not keep mirrors in the house because they see the reflection of the servants in them. Caroline, however, remains a skeptic.

Caroline believes that hoodoo is affecting Ben's illness somehow. Taking advice from her friend Jill, she goes to a local dry cleaner, known to have a hidden Hoodoo shop, to acquire a defense for Ben. Caroline does not believe in Hoodoo, but she thinks that Ben does and that he can be helped by believing the curse has been lifted. An old woman tells Caroline that hoodoo cannot hurt you if you do not believe in it. The woman teaches her a ritual with items to use to cleanse Ben's illness. When Caroline practices the ritual, Ben regains some ability to talk; he warns her to get him out of the house because Violet is a threat.

Caroline tells Luke about her suspicions, but he rebuffs her idea. They travel to a gas station that Caroline previously noted was lined with brick dust, which she is told is a defense against Hoodoo. A blind woman tells her of the Conjure of Sacrifice. In the secret attic room, Caroline had discovered a phonograph recording of Papa Justify, with this handwritten title. The old woman tells Caroline that this powerful spell is one of immortality, in which the caster sacrifices someone and gains the remaining years of their life. Caroline increasingly believes that Ben is in danger, but Luke belittles her fear.

Caroline uses brick dust to confirm her suspicions of Violet and drugs her to keep her out of the way. She tries to escape with Ben, but they find the gates locked. She leaves, promising him she'll return. Caroline seeks help from Luke to rescue Ben but learns he is allied with Violet. Luke captures her and takes her back to the plantation bound and gagged. She escapes again and scatters brick dust in the mansion; Luke is kept off, but Violet gets to Caroline.

After a brief struggle, Caroline pushes Violet down the stairs, breaking her legs. Caroline flees to the attic where she sees it set up for some kind of ritual. She follows paper instructions, making what she thinks is a protective circle, only to learn she has trapped herself. Violet enters, saying that Hoodoo works only on those who believe in it, and "they" have been waiting for Caroline to believe. She tries to deny it but is afraid. The recording of Papa Justify's Conjure of Sacrifice plays, which enables the conjuring soul to transfer to a new body, not merely confiscate years of life.

Violet pushes a mirror at Caroline, which reflects a little girl, then Violet, and last Mama Cecile. Caroline is knocked unconscious; and, when she wakes, she finds Violet barely conscious. She says that it is getting harder to make people believe. "Caroline" gives "Violet" a liquid that causes a pseudo-stroke so that she can't reveal the truth about Mama Cecile and Papa Justify. When Caroline's friend Jill arrives at the Plantation, "Luke" informs her that "Ben" and "Violet" left the house to "Caroline", thus allowing Mama Cecile and Papa Justify to continue occupying the house. The film ends with Caroline and Luke looking at each other helplessly, trapped in the dying bodies of Violet and Ben.

Mama Cecile and Papa Justify were capable of performing powerful rituals and unleashing supernatural powers, including "conjures". As Hoodoo practitioners, they believed that Hoodoo couldn't hurt people if they didn't believe in it. 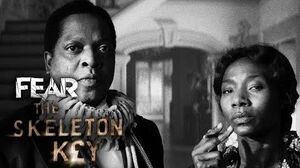 The Tale of Mama Cecile and Papa Justify The Skeleton Key 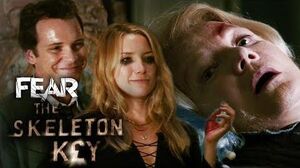 Retrieved from "https://villains.fandom.com/wiki/Mama_Cecile_and_Papa_Justify?oldid=3565149"
Community content is available under CC-BY-SA unless otherwise noted.