Wandering from place to place.

Being extremely hostile towards others (formerly).
Bossing her two sons around.

Get accepted into a primate group (formerly).

Marry Zugor and go to live with him.

Mama Gunda is the main antagonist of the 2005 direct-to-video film Tarzan II, the prequel to Disney's 37th full-length animated feature film Tarzan. She is a short, but overbearing gorilla who is Uto and Kago's mother.

She was voiced by Estelle Harris.

Despite her small size, she is capable of controlling her sons to the point of being mildly vituperative, uncomplimentary, opprobrious and abusive towards them. She had a very nasty personality that has seen her and her sons kicked out of numerous gorilla communities, this has made her an outcast of sorts amongst gorillas and only served to make her more of a bully towards others.

She was also shown to get extremely mad when her sons start arguing and fighting.

By the end of the movie, Mama Gunda redeems herself by falling in love with Zugor, an old ape who is capable of being every bit as bad-tempered as she is but also commented on her having "beautiful eyes". 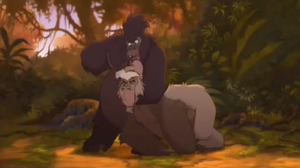 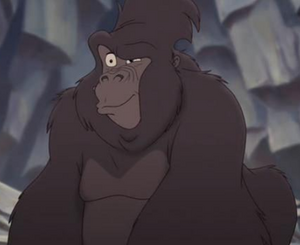 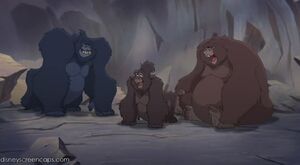 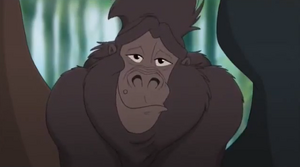 Mama Gunda reformed.
Add a photo to this gallery

Retrieved from "https://villains.fandom.com/wiki/Mama_Gunda?oldid=3985212"
Community content is available under CC-BY-SA unless otherwise noted.