Guardian of the baby Tattletails

Kill those who threaten her children.

Mama Tattletail, or simply known as "Mama", is the eponymous main antagonist of the 2016 indie horror video game Tattletail.

She was voiced by Geneva Hodgson, who is the character designer/co-developer of the game.

Mama looks similar to the Tattletail children; a Furby-like toy with tall ears, a muzzle, and no arms. Unlike them, she has a small, white tuft of hair and brown fur. While hunting the player, Mama has glowing red eyes, long, thin, sharp teeth, and torn ears.

Mama was one of the Tattletails that were announced in the commercial that was on the VHS Tape. While the cassette was viewed by the player, Mama teleported to different areas of the commercial set, and was located next to one of the two Waygetter Electronics employees present. She is implied to be responsible for murdering the aforementioned employees. Years before this, however, Mama was rumored to have bitten a child's eyes out of their head, leading to her recall and ban.

On December 22, 1998, Mama is found next to an unplugged refrigerator with a cassette inside. When the player puts the cassette in, Mama explains her true nature to the player. When the player goes to the basement to bring Tattletail to Mama, she mysteriously vanishes and teleports into the living room area, and the player has to avoid her. If Mama hears Tattletail, she will jumpscare the player.

Throughout the rest of the nights, she becomes increasingly more active. When one of the Tattletails play hide-and-seek with the player, Mama comes out and the player has to avoid her.

The player wakes up on Christmas Day and opens the present with a familiar wrapping. The present opens and it was revealed to be nothing but an empty Tattletail box and afterwards, Mama jumpscares the player, meaning that Mama survived the ritual and that the Tattletail children were banished instead of her.

Unlike Mama jumpscaring the player on Christmas Day, Tattletail appears from the box, proving that Mama was successfully banished. Tattletail gives the player his tag and a Waygetter Electronics golden flashlight. The player then wakes up their mother, and the game ends with Tattletail thanking the player.

Mama returns as the main antagonist of the DLC expansion. When the player opens their present on Christmas Day, they find Tattletail to be significantly different; he now has spots on his fur, his eyes are green, and now gives out educational facts periodically. The player then hears knocking on their front door, and finds a mysterious letter telling them that the events occurring are not what actually happened, and that they must go back to previous nights to try to remember what actually transpired throughout the week. As the player travels back through time, they find memories that portray Mama as a kind, loving, and harmless toy. The player receives more letters that say that their memories have been tampered by someone, and must enter a warped dimension known as The Kaleidoscope, where all memories are stored. When the player enters The Kaleidoscope, they can find a deactivated Mama in the kitchen, with the option to load a cassette within her. The man speaking during the tape, most likely a Waygetter Electronics executive, introduces Waydrives, which are responsible for giving the Tattletail toys their unique personalities, and possibly their sentience. Traveling further down, the player finds a distorted version of the VHS Tape, showing an alternate version of the Tattletail advertisement.

After watching it, the player is sent back December 20, with the original talking Tattletail instead of the educational one. The night transpires the same way it did in the original game, until the player is instructed to wrap Tattletail back up. When the player is halfway to the box's location, Tattletail tells a knock-knock joke. After the player's "who's there" response, Tattletail says "Orange!". After the player responds "Orange who?", the screen blacks out, and Mama jumpscares them, finishing the joke with "Orange you forgetting someone?!", indicating that the player never left the dimension. The player and Tattletail are then sent back to The Kaleidoscope's distorted version of the house, and Mama returns to her malevolent persona. The player then has to find the exit to the dimension, and escape Mama. As the player nears the exit, Mama becomes increasingly more desperate, as she begs that they do not leave her, in a desperate attempt to feign mercy from them.

After exiting The Kaleidoscope, they are sent back to their house, with everything normal restored again, as well as receiving another letter congratulating them for their success. The expansion ends with the camera ominously zooming in on Tattletail, with Mama's chase music playing, before abruptly stopping. He then jokingly says "Me love you!" to the player, as the screen transitions to the credits. 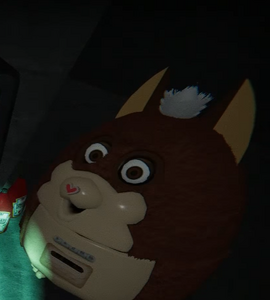 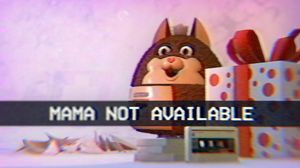 Mama in the trailer, featured in the Tattletail advertisement commercial. 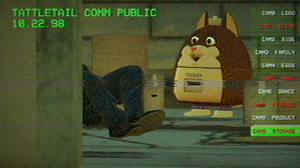 Mama, next to a dying Waygetter Electronics employee. 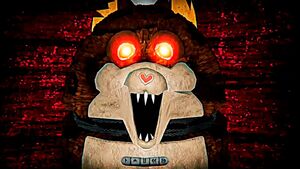 Mama attacking the player.
Add a photo to this gallery

Retrieved from "https://villains.fandom.com/wiki/Mama_Tattletail?oldid=3552375"
Community content is available under CC-BY-SA unless otherwise noted.