Mammoth is a member of the H.I.V.E. Five and a major antagonist in Teen Titans Go!. He is a large, brutish, mammoth-like metahuman who loves to smash things and crush people.

He was voiced by Kevin Michael Richardson, who also voices Trigon in the same show.

Mammoth first appeared in "Super Robin", where he assisted the rest of the H.I.V.E. in robbing a bank. When The H.I.V.E. got into their starting positions, Mammoth slammed the ground to look intimidating. Mammoth fought with Robin, who was extremely weak and pathetic due to his lack of powers. Robin ended up attacking Mammoth for an extremely long period of time, longer than anyone else, wearing himself down. Meanwhile, Mammoth put in little effort to painfully strike back without breaking a sweat. Eventually, Robin managed to scuff Mammoth up just enough so that he could tie his legs up in ropes and topple him.

In "Artful Dodgers", Mammoth served as one of the members of the three members of The H.I.V.E. Fivers, who actually got to go out and play, with the other two being Jinx and Gizmo. See-More and Billy Numerous, however, never got the chance to play, as they were forever obligated to be the designated "benchwarmers" the whole time. He crushed the Teen Titans every time he played against them. When the Teen Titans cheated, Raven opened a portal and made him fall into it. When The H.I.V.E. Five won, Mammoth wielded the trophy victoriously.

Mammoth appeared for the first time without the rest of the H.I.V.E. in the episode "Gorilla", where he recklessly tore the streets up Jump City apart and destroyed things. He attacked the Teen Titans in battle and when Robin asked Beast Boy to assist him, Beast Boy refused, saying that "gorillas don't help people", as he was in the form of a gorilla at the time. Mammoth smashed Robin and ran away.

In "Breakfast Cheese", Mammoth was pitted against Starfire in battle, but Starfire didn't attack him after she saw how horribly the other members of the team were being beaten. She thought any violence unleashed onto Mammoth would be excessive and unnecessary. Just then, Cyborg fired homing missiles at all of them, blowing them all to smithereens.

In "In and Out", Robin disguised himself as Red X to infiltrate the H.I.V.E. Tower, posing as a new member of the team. Despite Gizmo immediately accepting him into the team, Robin felt the need to prove himself, by taking down their biggest teammate. This would be Mammoth and Robin attacked him excessively, to the point, where he started cowering in fear, crying like a baby.

Later, Cyborg infiltrated the team, posing as Stone and did the exact same thing to Mammoth, while the latter was still healing from his previous encounter.

Finally, Starfire, Beast Boy, and Raven all infiltrated the team, posing as Sapphire, Boy Beast, and Ravine, respectively and once again, beat Mammoth to a pulp for no reason.

During their final battle with the Titans, every member of the H.I.V.E. would get a beating, including Mammoth, who only cried and ached in pain, as this was his fourth superfluous beating of the past couple days and at this point, he just could not stand anymore.

In "The H.I.V.E. Five", Mammoth took a break from being evil to start breakdancing in an alleyway, catching the attention of a bunch of radically cool teens who thought he was cool. Beast Boy entered and challenged him to dance-off, which he won, putting Mammoth to shame and ruining his otherwise wonderful day.

Mammoth is a big, muscular man with gorilla-like features and a rather "prehistoric" theme to his character. He has long orange hair and a little orange beard. He wears a black sleeveless suit with golden bracelets on it.

Mammoth is a giant, brutish, near-neanderthal who is obsessed with crushing and destroying everything in his path. He is barbaric, primitive and in touch with his animal instincts. 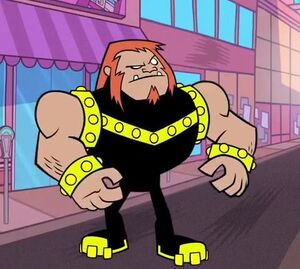 Mammoth, ready for a fight 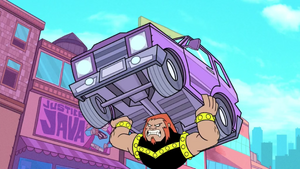 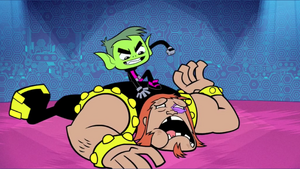 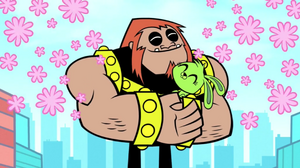 Mammoth showing his soft side 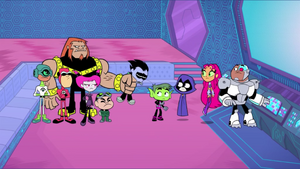 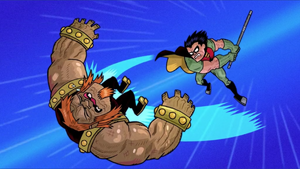 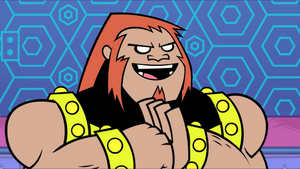