Giving long speeches on how much power he has.

Hating Sonic the Hedgehog and all the other heroes.
Harnessing the Ixis Magicks.

Defeat Sonic the Hedgehog, Tails, Knuckles, and anyone else who stands in his way. (abandoned).
Attempt to conquer Mobius again once Sonic and his allies have died of old age.(failed due to Super Genesis Wave).

Mammoth Mogul is a powerful recurring supervillain from the Archie comics incarnation of the popular Sonic the Hedgehog franchise. He is an anthropomorphic mammoth sorcerer, who was once the founder and leader of an ancient secret society of Mobian spellcasters known as the Order of Ixis.

One of the most powerful villains in the Archie Sonic universe, he appears as the central antagonist of several major storylines, many of which were cosmic in scale and endangered multiple worlds or even universes.

Like many of more prominent Sonic the Hedgehog villains, Mammoth Mogul has a super-form, known as Master Mogul - this super-form is so powerful that it has required the godlike powers of Titan Tails to defeat it.

Mogul is a large, brown-furred, dark green-eyed, anthropomorphic woolly mammoth, originally clad in a white double-breasted suit (although he also temporarily wore a purple suit). In flashbacks he has been seen wearing a toga made from animal skins, and on a number of occasions in both the past and the present he has donned gold or green armor. When wearing the gold, he wore a red cape; the green armor came with an under-outfit of matching hue.

Mogul also seems to favor walking sticks, and has owned at times both a cane proportionate to his size and a scepter with a green gem embedded in the top.

He originally had one of the fabled Chaos Emeralds embedded in his chest, usually concealed by whatever he was wearing but revealed to unleash blasts of energy. This gem was later taken from him, and he afterwards wore his suit opened slightly to reveal the pit in his torso where it once rested; upon obtaining a new emerald, he continues to have it exposed but appears to have had his shirt modified to reveal it without exposing any more of his torso.

Mammoth Mogul's powers include being a telepath/brain washer, plus, being a mammoth, he also has the power of super strength and is seemingly the strongest Mobian ever. Most of all, Mammoth Mogul was originally the one who developed a dangerous form of sorcery called the Ixis Magicks which the Order of Ixis was based around. 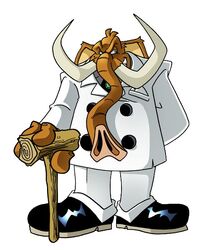 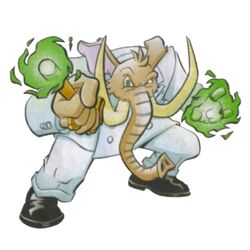 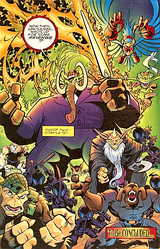