Has all abilities as Spider-Man enhanced

Return to his human form (succeeded).

Mutated Monster
Man-Spider is the mutated form of Spider-Man which appears in both the comics and in the 1990s animated series.

During a trip to the Savage Land, Peter Parker and Warren Worthington III (Angel/Archangel of the X-Men) were captured by the Savage Land Mutates created by Magneto years before. The Mutates' leader, Brainchild, used them as guinea pigs in a machine that "devolved" them into primordial forms, Spider-Man was transformed into a monstrous man-spider hybrid, and Angel into a griffin-like form - in order to use them as enforcers in the Mutates' conquest of the Savage Land. They were then sent to attack Ka-Zar, self-styled Lord of the Savage Land and his allies, the Fall People tribe. Although conditioned to obey Brainchild, Parker's consciousness re-awoke within the Man-Spider; horrified at what he had become, he promptly abandoned the battle. Spider-Man and Angel were later cured when Karl Lykos drained their mutant energies and turned himself back into his alter ego, Sauron.

Years later, an encounter with the villain Plantman saw Spider-Man exposed to a mutagenic pollen which partially transformed him into a misshapen creature similar to his previous Man-Spider form. He managed to force Plantman to hand over the antidote.

In the "Avengers Disassembled" crossover event, Spider-Man encountered an enemy called the Queen, a woman capable of controlling insects and arachnids. She triggered another transformation in him: first, he grew extra eyes and hair covering his body, and second, he changed into a Man-Spider-like form (however, with his human mind still intact); and finally he transformed into a giant spider. In that form, he seemed to die, but instead emerged in human form, but with enhanced powers (which he later lost due to the rewriting of reality during the "One More Day" event).

In Spider-Man: The Animated Series, Spider-Man's transformation into the Man-Spider was not caused deliberately, but as a result of his body mutating further from the original spider-bite that gave him his powers. After his attempts to ask Professor X and the X-Men for help developing a cure meet with failure (although he was able to assist them in thwarting a monster created when an anti-mutant scientist was exposed to a serum he'd developed to remove mutant abilities) Spider-Man turned to his friend Doctor Mariah Crawford for aid. Unfortunately, his initial attempt to cure himself resulted in him growing the four new arms, the accelerated mutation subsequently causing him to mutate into the Man-Spider after fighting the Punisher and a recently mutated Michael Morbius. The mutated Spider-Man retained some of his memories and his emotional responses to seeing his loved ones (or people who reminded him of them), but could not communicate with them. His approaches to a young red-haired woman who reminded him of his love Mary-Jane Watson, then the real Mary-Jane herself, and his attempt to defend his friends Flash Thompson and Debra Whitman from the now-vampiric Morbius, were perceived as attacks, causing him to retreat from each incident in despair.

He certainly retained Spider-Man's heroic nature; perceiving Morbius and Punished as threats. Though it's implied his human mind was slowly evaporating; given Spider-Man's confusion upon returning to normal.

Thanks to the collaboration of Kraven the Hunter (who had reformed), the Punisher and Doctor Crawford, Spider-Man was returned to his human form, but had to receive special treatments from Doctor Curt Connors every 24 hours to prevent the mutation from reoccurring. When the Vulture attempted to drain Spider-Man's youth and power in a later adventure, Doctor Connors reprogrammed the device that the Vulture was using to absorb the defective genome that had caused the mutation originally, resulting in the Vulture mutating into a Man-Spider (though Vulture somehow managed to permanently get rid of the mutation at some unspecified point before his next appearance) and forever curing Spider-Man of the defective genome. During the concluding "Spider Wars" storyline of the series, where Spider-Man teamed up with multiple alternate versions of himself at the behest of the Beyonder to save reality, one of his counterparts was still dealing with the mutation crisis, completely transforming into the Man-Spider during the mission before the ailing Beyonder was able to use the last of his power to teleport Man-Spider back to his home dimension.

Man-Spider was voiced by Jim Cummings in all of his appearances in the show.

In the cartoon, Man-Spider was shown spitting acid from its mouth and able to produce webbing from every limb without web-shooters. It can safely be assumed that its strength was increased greatly past Spider-Man's already superhuman levels. Although Man-Spider seemed to have regressed to animalistic intelligence and could not communicate verbally, it retained at least some of Peter Parker's memories and feelings for his loved ones such as Aunt May and Mary Jane (although at one point it confused another redheaded woman with MJ) and even his heroic nature, as seen when it intervened in Morbius' attack on Flash Thompson and Debra Whitman. When persistently hunted and attacked by the Punisher, however, it retaliated ferociously and almost killed him several times. When he saw Flash Thompson after Morbius drained him, Man-Spider seemed to be saying "F-flaaaaaashh" in his roar; suggesting he could speak. When changed back to Spider-Man, its implied his mind had begun deteriorating after two days as he was confused by his surroundings.

Curiously, when the Vulture absorbed the genome, he transformed to and from his Man-Spider form sporadically, and in one case only partially, and retained his full intelligence, memories and ability to speak (most likely due to the unstable nature of the absorbed DNA).

The comic book version never displayed any noticeably enhanced strength nor acid-spitting; however it retained Peter's consciousness, but was unable at first to overcome its mental conditioning. It managed with some effort to communicate verbally, requesting Ka-Zar to kill it rather than live as a monster (though fortunately it was turned back into Peter before this became necessary). 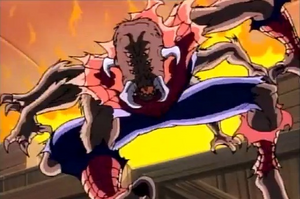 Man-Spider in Spider-Man: The Animated Series. 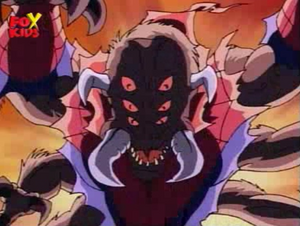 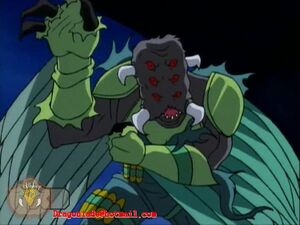 The Vulture mutating into Man-Spider. 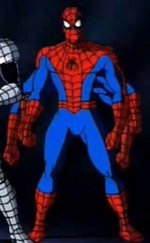 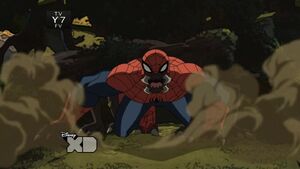 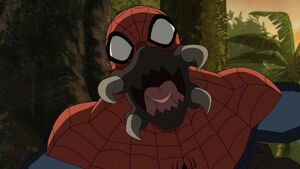 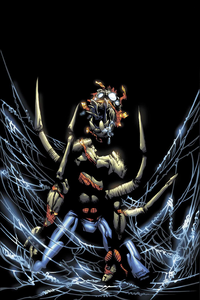 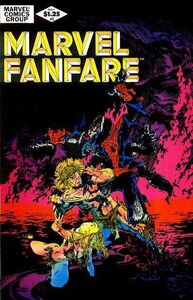 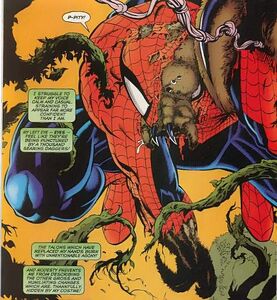 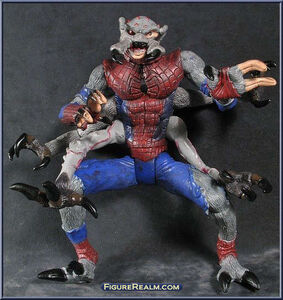